3 Ways To Compare The GDP of Countries

If you have ever travelled abroad, you must have seen that the same product may have a different price here and back home. There is a reason why Big Macs are cheaper in China than in the USA. The reason for this is the difference in national output of both countries. Economics assignment help expert tells you why is it.

Because there are 3 ways using which we can compare the economic output of any two countries. This economic output is also known as a gross domestic product. When you are preparing the economic comparison of any two countries, you need to identify what is the purpose of this analysis. In short, you have to see what will be the purpose of this analysis. Moreover, you need to take into account the population that will be affected and the role of exchange rates.

Here, I have explained the three ways that you can use to compare the GDP of the two countries, how to calculate them and when to use which.

The official exchange rate is the most preferred method of this comparison. And not just any exchange rate, foreign exchange rate. Where do you get this rate from? It is either set by the government or the central bank. What does the exchange rate mean? It means that if you give the bank one unit of your country’s currency, how much will the bank give you in return.

You should remember that the official exchange rate is the fixed exchange rate, i.e. it does not change as per the market forces. Most of the central banks use the US dollar to fix their currency rate. For example, if you see the Chinese market, you will observe a fixed rate for the yuan. China keeps control over labour and manufacturing costs. That is why ‘Made In China’ products are relatively a lot cheaper in exports than any other country.

A low exchange rate as per the OER, $11.97 trillion GDP in the year 2017, the method in China means that the economic output for China is quite low. Can you believe that the price of a Big Mac in China is only $3.17 while it is $5.28 in the United States! Ever heard of the magazine “The Economist”? Well, these guys started using Big Mac as a reference to determine the currencies which are now known as the Big Mac Index.

This method is more accurate to compare the GDPs of the two countries. Purchasing Power Parity considers the changes in the exchange rates over time. Not only that, but this is also affected by the manipulations by the government in exchange rates.

PPP and GDP are old friends. It is calculated by determining what each item purchased in a country would cost if it was sold in the United States. Confusing. Let me break it down. Imagine that ABC Ltd manufactures a product X which costs $100 in Australia. PPP means identifying what will be the price of product X if it is sold in the USA. Later on, all the costs are added for products and services that are produced in that year.

PPP is most useful when you are comparing the developing market with the developed market. Taking the example of China, again, you will see that PPP gives a better result. Using PPP, China’s GDP for 2017 comes out to be $23 trillion. This is almost $11 trillion more than the result in OER method.

I guess you now get what I was saying, don’t you?

Using GDP per capita is a good way through which you can compare the economic output of any two countries. Why is it better? Because to calculate GDP per capita, you need to divide the GDP by the total population of the country.

This method of GDP comparison can be used to compare any two countries as long as they are a part of this Earth. You just have to see that you using PPP.

The example of China is back once again! When we see GDP per capita, ran of China is 104. Quite low, isn’t it? Where does Australia stand? 10 as per World Bank in the year 2017. Not bad, eh? Anyway, China’s rank is low because they have way too many people living there. In a population of 1.37 billion in 2017, the per capita income was around $15,400. And why does Australia ranks at 10? Because we have a few people living. 24.6 million as per the census in 2017. Whoa. Kids, what do we learn from this? The standard of living in Australia is better than in China.

The secret is, fewer the population, higher is the per capita income there. That is why oil-rich countries rank at the top. They produce too much income and have too less population. 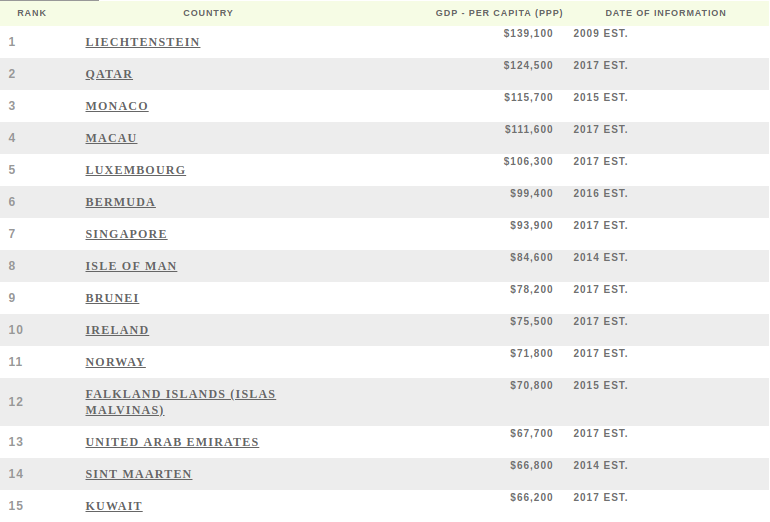 Do you see a lot of oil producing countries in the top 15? That's what I am talking about.

Get economics assignment help from My Assignment Services for your GDP related assignments.

If you have an assignment where you have to compare the GDP of two countries and are unable to do so even after reading this blog, mate, you need the help of an economics assignment writer. Contact one now at My Assignment Services and get answers to all your queries.

If you have any other assignment that is related to GDP or a parameter of economics, the economics assignment help offered by our team is your only destination. You will get personalised sessions and online tutoring, 100% original and unique solutions and the best price there is. Yeah, no kidding.

GDP Criteria What more do you want? Reach us now!

Mike is of the belief that every student who needs assignment help should get one. So, he decided to not pursue a job in fortune 500 company but share his knowledge and skill to aid students in their academic. Mike provides assignment help to students across Australia with their doubts and queries in the subject of economics. His expertise of the basic concepts of microeconomics and macroeconomics has gained him credibility among the students looking for economics assignment help. Mike McDonnell has provided expert consultation to students for a long time and has been an assignment writer at My Assignment Services since his postgraduation.

How To Write A Business Research Project Plan