When talking about robots, there are always split opinions ranging from ‘robotics’ is the future or “the robots will take over the world someday.” You might’ve thought the same at some point. However, the common denominator of both ideas is that robotics entails huge scope for future innovations, and its need is indispensable.

In fact, robotics is a major component in today’s manufacturing industries. The development of the first robot in the 1950s was a huge achievement in the technology field, and there were no stopping researchers from exploring further. Hence, arrived robotics - an extensive field that branched out from engineering and computer science.

Did you know that the word robot has its origin in the Chez language? It originated from the words ‘robots’, which means forced labour.

Moreover, as discussed above, the other side of the spectrum believes that robots will replace humans. The exact notion is a reality now; the most common example is mobile robots. Such robots have the potential to move around and do various tasks autonomously. All they need is a command and a matrix to execute various tasks.

Although it is a reality, humans are still in control, so you can calm down before we move further. Let’s go over the types, functioning, scope, and some advanced mobile robotics examples.

What is Advanced Mobile Robotics?

A mobile robot is like any other electronic device in your home. The only difference is that a mobile robot can function autonomously or without much human interaction. Their functioning is controlled via software and a performance matrix. Kinematics, Artificial Intelligence (AI), and computer science or programming are the main attributes of developing a robot.

Such robots have inbuilt sensors, actuators, controllers, and power systems that enhance their functionality and stand out from regular machines. Mobile robots are capable of accessing their surroundings and enhancing their configuration accordingly. Machine learning has been a popular tech trend recently, and it is also used in advanced mobile robotics.

The first-ever robot was invented by George Devol in the 1950s. - Wikipedia.

Mobile robots are being adopted in various industries. The manufacturing unit of various products utilises such robotic technology to increase production accuracy. From the unmanned rovers used in space missions to the mobile vacuum cleaners in our houses, the range of implications is vast and is still expanding.

Finding assessment answers can be a challenge as you may search for hours and end up without any useful resources. We offer a live guided session for students at affordable prices; you can enrol by filling out the enrolment form and connecting to one of our experts. It's that easy and accessible. Get science assignment help that doesn't compromise your learning experience; rather, upgrade it with our experts and score HD.

How are the Different Types of Mobile Robots Classified?

Mobile robots are mainly classified into two groups: their functioning environment and how they move around. Here’s the classification and sub-types:

Classification based on the working environment

Robots are also used for defusing bombs, called crude robots, and they’ve been in use for more than four decades - Facts.net

Classification based on mobility

These are mobile robots classified based on their working environment and mobility. Robots are everywhere, from the escalators built with motion sensors to the latest driverless cars; all have been developed and advanced with human input. The future of robotics holds more intriguing and astounding innovations. 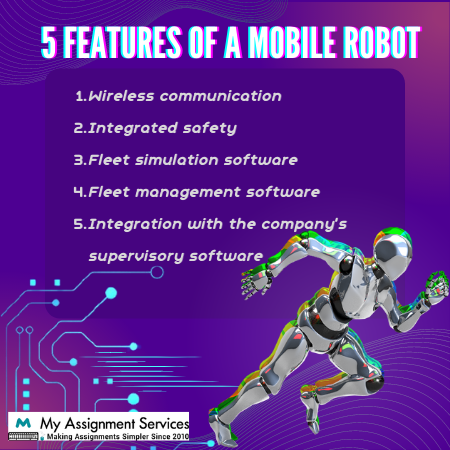 What is the Scope of Advanced Mobile Robotics?

These are the top five robotics trends in 2022:

It is a form of technology that allows robotic devices to automate various tasks that may seem mundane or repetitive. ELTA Courier is currently using this technology in Greece. Mobile robots sort thousands of parcels and mail in a day.

2. RaaS (Robotics as a Service)

Just as it sounds, mobile robots are used for daily tasks or to simplify them. Mobile vacuum cleaners, automatic wheelchairs and android servers in restaurants are a few examples.

These robots are similar to RPAs but are exclusively used in manufacturing units and warehouses. They are designed to move autonomously and do not need constant supervision. Such advanced mobile robotics examples are drug delivery bots in hospitals and robots in product processing units of any manufacturing industry.

Such robots are designed to carry out various functions. Also called cobots or collaborative robots. They are built to take care of many operations at once. The epitome is military robots - designed for surveillance and security.

These robots are in the swing, designed to take the shortest path to deliver things quickly they come in hand for many industries used. Currently being used in hospitality, logistics, manufacturing and defence industries.

As Mellon's Robotics Institute predicted, robots are predicted to replace humans in the workforce by 2040.

These are the top five ongoing trends in the robotics industry, specifically mobile robotics. Robots are fundamentally designed to ease human labour, and these robots or cobots are doing that successfully.

Robotics is a field that still has miles to go. Amidst the ongoing innovative process, we are learning through trials and errors. One of the world’s leading social networking platforms, Facebook, shut down its own AI due to the system developing a new language intangible to humans. Such errors are rather a lesson than a mishap to build a constructive tomorrow using such technology rather than planning the world’s doom.

Working through your assignments will require you to go through the various stages of researching, drafting, compiling your research papers, etc. It can get overwhelming to do everything and get science assignment help through free resources and affordable live guided sessions. Our experts can help you throughout the process of compiling your assignment. Enrol today!

What is the Importance of Multimedia Systems in a Student’s Life?