A Beginners Guide to Psychological Formulation

Psychology is a complex field of study; in fact, studies show that a tiny bit of your brain, the size of a sand grain, encompasses 100,000 neurons and over 1 billion synapses. Imagine that, so when psychologists say that your brain's capabilities are limitless, it is true and proven.

It is a field that has been in practice for a long time; the word 'psychology' is derived from 'psyche' in the Greek language. Translating to 'spirit or soul' and of course 'logia' means to 'study of something'. The 'study of an individual's soul' has now transcended into the psychology that we study today.

The psychological formulation can be defined as putting a hypothesis into practice. In this, psychologists create hypotheses or develop a theory for the origin of a mental condition that a patient is suffering from. Later the hypothesis is used as a basis for the patient's diagnosis.

The diagnosis and the therapy are put into action based on the hypothesis, and it is often useful for both the patient and the psychologist. Yet, a final formulation can be achieved when the patient finds a meaningful outcome from the formulation and hence the reformation of the original hypothesis is done multiple times. 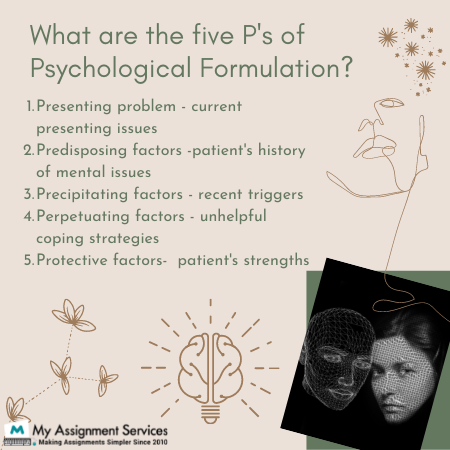 How to write a Psychological Formulation?

There are many methods for writing a psychological formulation, and the more knowledge there is available about the patient's condition, the more accurate the hypothesis can be. Hypothesis affects the action plan for the diagnosis and treatment of the patient. The formulation sheet comprises all the details of the patient's condition, diagnosis and treatment plan. Follow these steps to write one:

Use the key findings and the patient's relevant information to develop a hypothesis for the origin of the disease. The basis for developing such a hypothesis is the patient's history if there's anything noteworthy in their experiences and behaviours.

Did you know that our brain's capacity has
decreased by 10% since we no longer need
to hunt and gather for survival?

Step 4: Connecting the data to the patient’s present condition

The final formulation is generated in this step using the date from the formulation matrix. The matrix is read horizontally, and the chronology of the condition or issues must be filled carefully to support accurate formulation.

You can write a psychological formulation and develop a hypothesis about the patient's condition using these steps. Completing all the steps in the right order is necessary for an accurate formulation. The formulation matrix should be filled carefully according to the correct chronology of the condition's prevalence.

Nursing students are assigned various tasks like case studies, clinical reflection, writing, developing case reports, and more. It can be challenging to work through all such assignments, especially if unfamiliar with the technical lexicons. Get nursing assignment help at affordable prices from experienced experts that will help you through live guided sessions.

How Accurate is Psychological Formulation to Mental Health?

Case formulation is an important skill used by applied psychologists to develop a basic theory for diagnosing a patient, and such is done using relevant details from the patient's history. The chances of the hypothesis being accurate is relatively high, yet there are different schools of psychology that use different approaches to determining the reason behind the patient's condition.

For example, a psychologist that focuses as a cognitive therapist will focus on cognitive functions; on the other hand, a psychodynamic therapist tends to focus on the involuntary processes of the mind. Also, formulations are developed at the case level, so such differences in the areas of focus may create difficulty for the client.

There are various mental issues with varied origins.
They are characterised by unusual or disturbing
thoughts, emotional imbalances, behaviour and
social/family connections. - WHO

Formulations must not be completely subjective, and reliability should be established in a formulation to ease the patient's understanding of their condition. Reformulation is often unavoidable, and it is necessary when one hypothesis has limitations, yet the overall accuracy of a hypothesis must be subjected to retest and check its reliability. 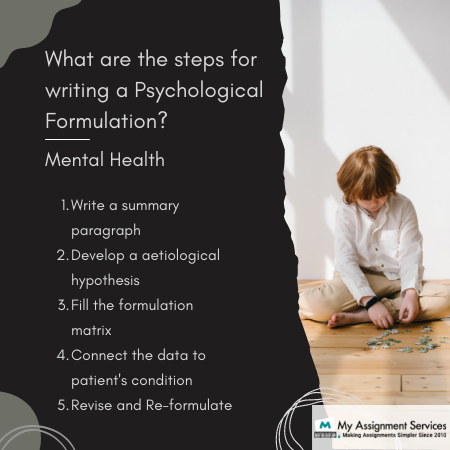 Is Psychological Formulation an Alternative to Psychiatric Diagnosis?

Over the years, psychiatric diagnoses have been criticised for their validity, reliability, disconnectedness to social contexts, and being stigma inducing. Other than the widespread hate here, we may focus on why they are inconclusive yet still long-standing in the field. The psychiatric system implies that psychiatry is among the various branches of medicine like neurology, cardiology, oncology, ect.

All these fields are focused on determining the fault in the functioning of an organ. Similarly, psychiatric diagnosis focuses on its psychological aspects. Yet, it is heavily criticised due to its impacts on the patient. A few may find it helpful to name their distresses, yet many others have reported it being a stigma, shame, and cause for pessimism.

One out of seven children aged 10 to 19 years
are going through mental issues, comprising
13% of the global population with mental
conditions.- WHO

Psychological formulation is useful for offering an in-depth study of the patient's condition and the origin of their issues. It is also a personalised and effective way of seeking a diagnosis that is different for each individual and not just naming the generic conditions that might just be speculations,

Feedback from individuals that used formulation was mostly positive, and they experienced trust and understanding with the psychologist. It felt empowering and relieving and enabled them to proceed forth with the diagnosis. It is a good method for eliminating pessimism in individuals going through mental issues.

Writing such a report can be challenging, and those practising medicine or nursing must compose many of these. If you face trouble with structure and referencing, you can seek help from experts online. Fill out the enrollment form to get nursing assignment help; our experts will help you meet all the technical requirements and help draft the content through a live session.

Why Use Cooperative Learning in Classrooms?