A Role Model: The Leadership Qualities of Bill Gates

Bill Gates is a name that almost everyone on this planet knows (unless you live under a rock or have always been a mac user). The co-founder of Microsoft and one of the initiators of the Microsoft revolution in the 1970s. He was named the world’s wealthiest nineteen out of twenty-five times by Forbes.

Becoming a billionaire requires much effort and talent but becoming the world’s wealthiest is another league of its own. Only those with a strong mind and passionate heart can achieve the unfathomable. Even if you aren’t familiar with the Windows operating system, you must know it since most computers use Windows OS.

Success is an awful teacher. It convinces smart ones into believing they won’t lose - Bill Gates

That is the exact vision that Bill Gates started with after dropping out of Harvard in 1973. To say he succeeded in fulfilling his vision is an understatement. Bill Gates overachieved, excelled and set a new standard in the software industry. But what makes him so successful? Read for th to know more about his leadership for your bill gates leadership style essays. 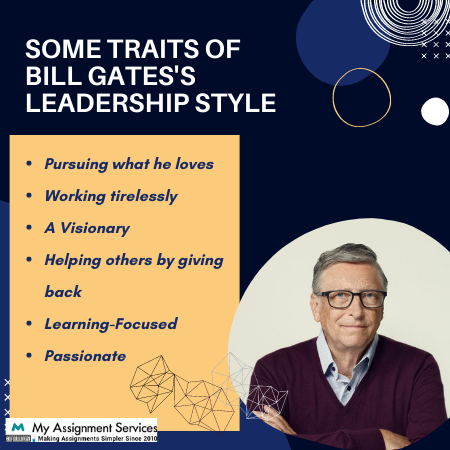 What Makes his Leadership Style so Effective?

Bill Gates has two main focuses when it comes to leading a team. His leadership style is Autocratic and Transformational. Authoritative or autocratic leadership is a type of leadership where the leader or the head of a company holds the most power. He even signed the checks for Steve Ballmer, who was the successor of Bill Gates in the CEO position.

Gates was a visionary leader, and he was every single employee of his company who shared the same vision. He wants and holds authority in his company which comes in handy for situations where quick decision making is needed. But controlling leadership can often lead to a loss of creativity and prevents employees from exploring better alternatives.

In addition, Bill Gates' leadership style is also transformative. He holds an unparalleled passion and works ethic for making his vision a reality. He greatly influenced his employees and always provided the best working environment for the best results. Especially employees starting their career can learn a lot from him.

Despite being autocratic, he never delayed or discarded any technological improvements. In fact, he sold his shares two decades ago and now only owns 1 percent of the company’s shares. Though he achieved his vision and his passion for success dimmed, he never denied the company from releasing a new Windows version. Hence we got Windows 11.

What other Traits can I Add to My Bill Gates Leadership Style Essays?

Here are a few other qualities of Bill Gates that influenced his leadership style and helped him become the best in class:

Despite being the world’s wealthiest man, Bill Gates believes that you can never buy time. Time management is a quality that everyone should possess. A great leader respects their and everyone else’s time. Meeting deadlines and achieving goals with a timeline are good traits to possess as a leader.

Bill Gates had a vision of every computer system using windows, and he achieved it successfully. Being a visionary and believing in your vision makes you a transformative leader.

Regardless of being an autocratic leader Bill Gates cared for his employees and did everything to offer the best working environment. Though many believe supporting people is the key to growth, he always believed in giving feedback directly and frequently.

In his junior year, he dropped out of Harvard, yet he never stopped learning. Gates believes in lifelong learning. Establishing Microsoft Corporation as one of the World’s biggest tech companies never stopped him and his subordinates from learning and innovating.

The tech industry is always evolving, and the trends are always changing. Bill Gates always supported and encouraged his employees to develop new and innovative ideas. Mixing innovation with creativity is his style.

Playing safe isn’t Gate’s isn’t what made him the industry leader. He dropped out of one of the world's most sought after prestigious universities Harvard and licensed MS-Dos to IBM when IBM wasn’t that successful. Taking risks is what it takes to fulfil a vision as a leader.

Bill Gates would have switched to becoming an AI researcher if Microsoft had failed - Economic Times.

Being an industry leader for many decades and a revolutionary leader takes more than just beginner’s luck. As the saying goes, reaching the top is difficult but staying at the top is more challenging. If you want to be an influential leader, you must change yourself to be the leader you want to be, and how can you do that?

When you feel the need for added assistance in completing your assignments on time, you can enrol here to get the best assistance from experienced professionals. Our experts can help you edit or proofread your assignments hours before the deadline. Fill out the enrollment form to get quick and easy management assignment help. 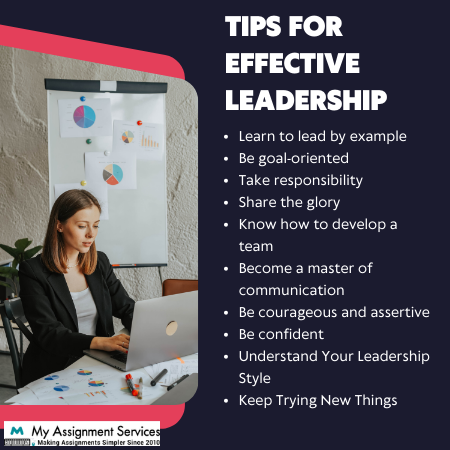 How to Adapt Bill Gates’s Leadership Style to Your Team?

Every team leader must have qualities that make them stand out to their team. Following the masses or the tradition isn’t going to highlight your leadership. Here’s how you can adapt to new leadership techniques and implement them in your team:

Your team needs a leader to comply with the company policies. Yes, they need a leader to monitor them, but a leader's role focuses on empowering the employees. New ideas/innovations become the next big thing only when they get proper nurturing and exposure.

Learn from your mistakes

You will have moments when your leadership results in a good outcome, but a leader's role is more important at times of failure. Each failure is one step closer to success, and as a leader, you should learn from your mistakes and help your team do the same.

Learning is a lifelong process; you learn from books, learn from other people, and learn from your mistakes. As a leader, it’s your responsibility to help your team members thrive by learning from their mistakes and exploring new ideas to achieve success.

According to LinkedIn surveys, 94 percent of employees want to stay at a firm where they get to learn and explore. As a leader, you can help your employees by exploring ideas; setting goals and visions. Be the leader that sets an example for your teammates.

These are the best leadership skills that made Bill Gates the tycoon today. You may use them in your leadership but always remember that every leader has a different approach and attitude. Just because someone made successful decisions doesn’t make them the blueprint for success. Follow a good example to develop your leadership style.

It’s good to enjoy success, but learning from your mistakes is more important. - Bill Gates

His leadership is an interesting study topic. Bill Gates' leadership style essays are very common among university students, and he is highly admired by many. The qualities expected from a leader, Bill Gates, are its antithesis. Still, he’s one of the most successful leaders. Dropping out of university, pursuing his vision and doing exactly what everyone told him not to do, he’s a power to be reckoned with, and many admire him.

Get management assignment help at an affordable price; enrol to get a live guided session with our experts to help you resolve any academic query and deliver the best assignments. You will also access our extensive digital library and get free academic resources. Get started with high-quality assignment help at the best-offered prices to help enhance your learning experience. Fill out the enrollment form today.

What is the Importance of Multimedia Systems in a Student’s Life?