All About Literary Techniques and How to Easily Identify Them

Literature is a beautiful subject that contains the essence of our heritage and interwoven with the happenings of the present and it sometimes predicts the future. In the words of EDWARD COUNSEL, “ All literature is but a word--a thought--a maxim amplified.” Either a writer, a student or a reader, for interpreting, understanding and analyzing any piece of art it is essential to have a strong grip of the literary devices infused in it. Yes we know sometimes these similar-sounding rhetoric devices like Oxymoron and Onomatopoeia, Anthropomorphism and Euphemism, etc., can create confusion in the creative brains. We are here to help out those university scholars who are doing mastery in English Literature and searching out for expert assistance in understanding those complex literary terms and their definitions.

What are Literary Techniques or Rhetorical Devices?

Before digging deep into the definition of literary terms, it is first advised to understand what the term literary devices mean. To have a crystal clear picture of the scenario, you can scroll down and read further. “Literary devices are the techniques that writers infuse in their piece of art to create a special effect of their writing in the mind of readers. These artistries are used to emphasize writings and convey the message in an effective way”

Why literary devices are used in writing?

I am sure, being a student these devices must frustrate you at times. And you think of why these literary techniques create puzzlement in my mind? And why they are used in writings? Our experts say that the moment you are well-versed of these Literary Techniques you won’t feel it puzzling your mind. These terms are used to make you reading interesting. Through the infographic given below, you will have a clear picture of your ‘WHY’?

Why is it important to know these literary or rhetoric devices?

Having a good understanding of these terms will not only help you in scoring HD grades in your assignments but there are multiple other benefits too. Now that you have understood why knowing these literary devices are so important for a literature student, let’s move forward towards knowing the definitions of the most commonly used literary terms. 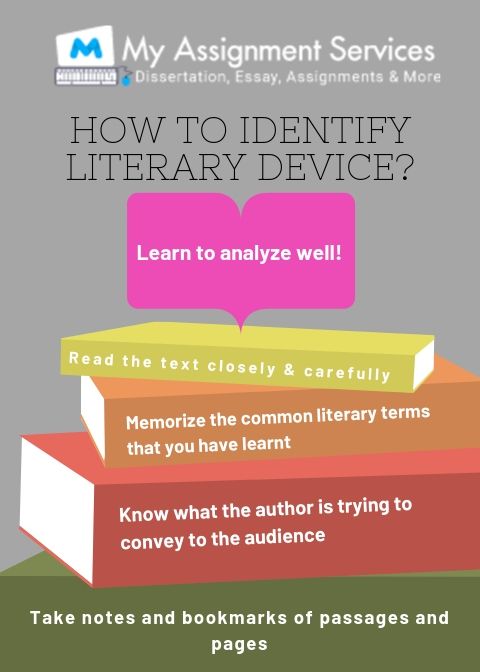 Sometimes is becomes difficult to understand literature because of the complex literary devices used in it. University scholars pursuing English Literature as their academic course must be well-versed with these literary terms complete the assignments. Even after having knowledge of these terms students get stuck in completing their assignments due to lack of time and skills of crafting the piece of art. Hence they need help from expert assignment writers. At My Assignment Services, we render top-notch English Literature Assignment Writing Help services at pocket-friendly prices to the students in Australia.

How To Write A Good Essay? Like An Expert

How To Write A Speech That Leaves A Great Impression?