An Overview of a Power Generation System

Australia's economic growth heavily depends on affordable and reliable energy sources. The supply of adequate, reliable and clean energy is the reason for the country's prosperity. Fortunately, Australia has abundant natural resources - renewable energy sources and fossil fuels. Industries, homes, and machines are the key areas that are empowered by energy resources.

Did you know Australia has 0.3% of the global net oil reserves?

The energy resources in Australia comprise five per cent of the gross domestic product value and twenty per cent of the net export value. It supports huge manufacturing industries and provides employment in every state of the country. With the economy upscaling yearly, energy demand is also rising exponentially. Technological advancements and population growth are a few of the other reasons for increased energy consumption.

Fossil fuel availability has met the major energy needs across the country. The abundant coal sources lower the energy generation costs; they are used for generating three-quarters of electricity. Australia has one of the world's cheapest electricity. The Australian transportation system also greatly depends on the energy generation using oil. Let's learn more about the types of power generation systems and the steps involved in this system. 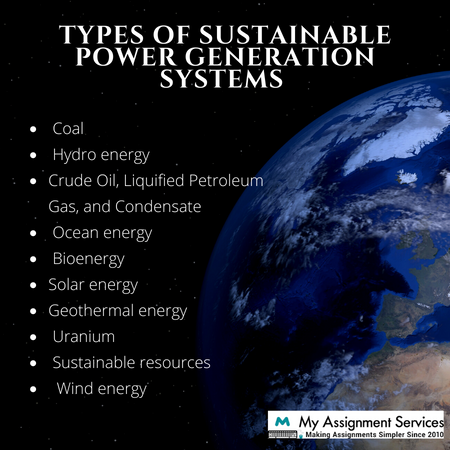 What Are the Stages of Power Generation?

Due to its sheer independence, it provides leeway for its usage, and electrical power has increased tremendously during the last decade. The range of uses has resulted in a steady growth in demand. Nevertheless, one criterion has remained constant as the capacity or demand has grown. Such that, we should create the necessary quantity for the loading at that precise time since such a huge proportion may not be kept in for meeting such high demand.

The section of the electricity system where we turn some sort of power into electricity is called generation. In the power grid, this is the fuel source. It continues to run indefinitely. It produces electricity at varied power system levels according to the kind of unit and the turbines utilised.

Machines generate electricity, which is subsequently transformed into high voltage levels and supplied to transmission lines via a power transformer. The power generation system transports energy over huge distances to localised distribution systems. At the transformer site, it is converted to a lower voltage and supplied safely to customers.

Approximately 46% of the global uranium deposition, 6% of coal mines, and 2% of its hydrocarbon reserves are located in Australia. - Geoscience Department of Australia

These three stages are important in every type of power generation system. Improving the efficiency in the production and transportation of energy relies on resource availability and the distance between the generation site and the users. The availability of resources - natural resources, water, wind, sun, and more - is another important factor in the users' prices.

As an engineering student, you must be familiar with these concepts and the need for such models. Still, implementing them in your engineering projects can be a challenge. Get engineering assignment help from industry experts and finish your projects easily with professional guidance. Enrol today and get free access to our digital repository, where you get sample solutions, guidebooks, notes, and more.

How is Renewable Energy Useful in Australia?

Sustainable energy is created using plentiful and perpetually replenishable natural resources like the sunlight, air, water, and forests. Australia has an abundance of renewable sources of energy, and several well-known companies take the initiative to participate in developing sustainable energy sources.

When compared to grid-supplied electricity, renewable energy can result in significant cost benefits. Businesses may use it to lower emissions, improve their environmental commitment, and lessen their exposure to potential price fluctuations. A sustainable power generation system leads to business sustainability.

On-site generating is the most common type of renewable energy for companies in Australia. Numerous people employ biofuel production, photovoltaic (PV) solar systems, and wind turbines. Many companies decide to buy a fraction of Green Power from an electricity retailer where carbon pricing is the primary goal.

Australia exports more than 3/4 of its power generation, totalling more than Approximately 80 billion AUD, making up around 2.4% of the global net energy production. - Geoscience Department of Australia

Depending on the specific circumstances, the costs and advantages of investing in renewable energy might vary greatly. Consult a qualified independent supplier or system engineer who can maximise economy and energy results for advice. Sustainable energy is more effective, efficient and everlasting than any other energy source. 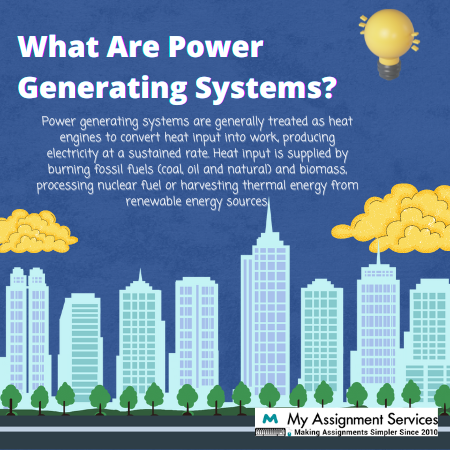 What Are the Different Types of Power Generation Systems in Australia?

The Australian nation is rich in high-quality, plentiful power sources. Despite rising output, it is anticipated that these sources, apart from oil, will persist for many more generations. The nation is home to a sizable amount of the world's uranium, coal, and traditional and non - traditional gas reserves.

In addition, Australia has access to a variety of plentiful, high-quality, and still-in-development sustainable energy sources. Here are some examples of types of power generation systems:

The global society is dramatically changing, and so are our energy needs. The future is way different from what we expected a century ago. Researchers say that by 2035 the global energy demand will double, greatly affecting global economics. The energy demands will be decoupled for the first time ever in history.

Countries under OECD (Organisation for Economic Co-operation and Development) will experience a decline in energy demands. The same can be achieved by investing more in greener energy sources and developing sustainable power generation plans. At the same time, the need for oil will decline by 2030.

Transforming a high school paper into a university-level assignment requires a lot of effort, especially for students who are in their university life. Need assignment help from experienced academic writers? Fill out the enrolment form to get assignment help at pocket-friendly prices.

How to Find Homework Answers Quickly?

How and Where to Buy Essays Online in Canada: My Personal Experience