Business management is the study that equips students with the knowledge and skills to manage and adapt to a diverse range of constantly changing business environments. Business management allows students to develop core business skills and effectively utilise these skills in specialist areas such as, business economics, human resources, advertising, international business, real estate, marketing and sustainability. If you have undertaken a course in Business Management, it is likely that you must have come across business management assignments. These assignments are developed to bring forward your understanding of different theories and practices used in management of a business and how you utilise these theories and knowledge to implement sustainable business practices in different industries. Writing a business management assignment requires a lot of research and analysis. Students would be expected to demonstrate their knowledge of business terms and concepts, analyse data to examine the accuracy of conclusions, and describe the concepts that are used in making business related decisions. Business management assignments are often challenging and require a lot of time for research and analysis. Students are often burdened with multiple projects and stringent timelines for submission. This leads to late submission of the assignments and penalties.

Each student is required to use MS Excel to perform an analysis of the state of VideoChamp’s business. You are then expected to write a report that refers to specific analytical charts which you have created in MS Excel to assess VideoChamp business. Describing the data content of each chart is insufficient, you need to analyse the information that the chart provides. Note that VideoChamp is a fictitious company. Each student is expected to undertake research of the movie rental industry and use the information gathered to analyse the competitive landscape of VideoChamp using Porter’s Five Forces Model. The application of technology in VideoChamp and the movie rental industry also need to be examined. You are expected to apply the concepts (not just define the theory) to VideoChamp. If necessary, you can make assumptions to support your argument. These assumptions must be stated clearly. Clear application of theory will demonstrate your understanding of these concepts. Students need to write simply. The sentences need to flow and be easily understood by the reader. Use of complex jargon and difficult words should be the exception rather than the norm. Your ability to communicate well and concisely will be assessed. The assessment is to be done by each individual student on their own. Discussion on concepts and expectations on the assessment can be done in class with teacher, but the deliverables must be completed individually. Students who submit duplicate assessments will be disqualified, irrespective of who copied from who. Background VideoChamp is a movie rental company in Australia. It has only 1 outlet in Doncaster suburb in Melbourne. Customers have to travel to the store outlet to rent videos. Although many rental companies have closed down their store outlets which includes VideoEzy, VideoChamp business is still profitable, despite an obvious decline in the movie rental industry.You have been given some basic data on the rental revenues of Video Champ over the last 2 years. Your objective is to analyse the data, and provide your assessment.

Contents   Background. 1 Business Performance Review.. 1 Competitive and Technological Analysis. 3 Disruptive technology. 4 Video Champ and block buster comparative analysis. 5 Conclusion. 5 References. 6 Background Video Champ is a movie rental company in Australia.  It has only 1 outlet in Doncaster suburb in Melbourne. In order to rent a video, customers have o travel to the store outlet to rent videos. Although many rental companies have closed down their store outlets which includes VideoEzy, Video Champ business is still profitable, despite an obvious decline in the movie rental industry due to the upcoming form so entertainment and gadget. The company is still serving due to its operations and the technology that it offers in the movie rental business. The purpose of the report is to examine the internal and external competitive environment that the company faces and hence base its strategy to maintain his position in the given industry. The competitive analysis will help the company to gauge its competition and understand the changes that the company may need to do in order to service in the industry. The report uses Porters five forces to illustrate various types of influences that the company faces from different types of competitors and the impact of disruptive technology on the company. Business Performance Review 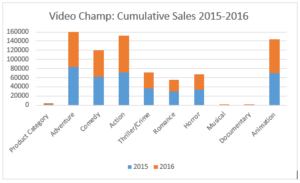 By looking at the above chart, it can be seen that the company made maximum sales in the adventure section mainly due to the popularity of adventure movies and series within the public. Also the least sales were in the documentary sector with $335.25 in 2015 and 270 in 2016 and the sales decline was -19.46% from 2015 to 2016. The tote cumulative sales in 2015 was $3,91,258.25 while in 2016 it was $3,88,237.63 which was decline  of -0.77% from the previous year. By looking at the above categories the decline rate of adventure posed as  awarding for the company as well as the product category since both of them experienced a decline of -5%. The other product category which came in the warning area was Thriller/Crime and horror since both these segments too experienced a growth decline of -5% compared to 2015. The two areas which are risky for the company is romance and cdcumentary since they too experienced a product decline of -15.57% and - -19.46% respectively. The area of danger for the company is musical since the growth decline was at -38.93% for the company. Two areas which experienced a growth was action and animation both which grew by 12.59% and 5.48% respectively. These rentals mainly grew due to the increased in demand by the customer base since action and animation movies have gained popularity in the past year due to which their demand is more 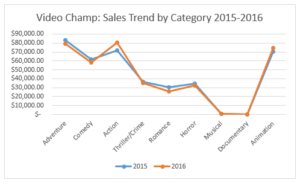 Our Approach Our business management assignment services focus on providing quality assignment solutions by doing an in-depth research on the topic and using relevant data to support their outcome. Our subject matter experts follow all the guidelines to the last word to deliver properly formatted, error-free and plagiarism free assignments. We know how important it is to submit original solutions within the stipulated time-frame. We have a dedicated team of quality analysis who check and re-check your assignment to eliminate even the minutest of error. Our business management assignment help services are customised to suit all students. You can contact our customer support team through calls, email and WhatsApp texts 24x7 for any assignment related query. Our customer support team will reach out to you instantly to discuss about your assignment requirements. You can also have a one-on-one live session to talk to our subject matter experts and understand the approach they take in order to give you a flawless assignment.

Want to Study Abroad but Don’t Know Where to Start? Trust The Chopras

This Author Says You SHOULDN’T Visit India for a Backpacking Trip, Read this post to know why?