It has been said that all characters basically fall into one of seven character types: Protagonist, Antagonist, Static Character, Messenger, Anti-Hero or Secondary Character, Villain, Sidekick. The following blog will examine what those six-story roles are as well as highlight some of the ways they can overlap. One point to remember is that it has been argued by many people over the years that there aren't really seven distinct character types but rather something like twenty or so (Kinsella et al.), many of which could potentially be seen as variations on a theme and not "types" at all (Kinder).

For the purpose of this blog, we'll limit our discussion to just these seven categories, finding it more adequate for use in most stories. Finally, we have come up with a descriptive overview of the different types of characters so we can better understand the role of these characters. 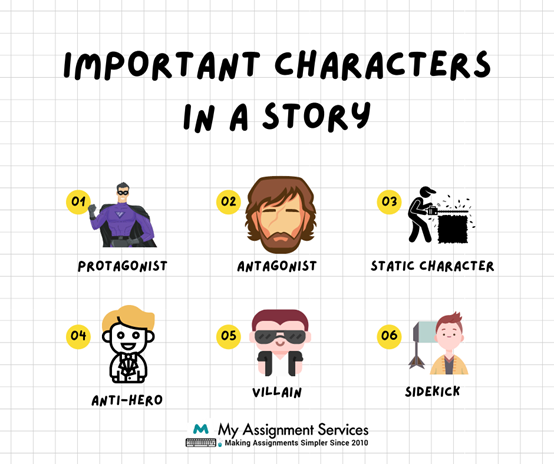 Let’s Get to Know a Few Categories of Characters

The Protagonist is the main character, the one who holds center stage throughout most of the story. When people think of story characters, they think primarily of this role. Exact definitions can vary, but generally speaking, it's that character (or sometimes those characters) around whom the central conflict(s) revolve and without whose personal growth, change or journey there would be no point to the story. Generally speaking, this will also be the person whose fate matters most at the conclusion in most stories. The protagonist does not have to be likable or even nice - in fact, very often, they are far from it! - but they must always be fascinating, and their active engagement with what transpires be vital for us to remain interested. When there is more than one protagonist, the story will play out in alternating narrative between their differing perspectives, or at least with an equal emphasis given to each.

The Antagonist exists as the story's counterweight, providing resistance in direct proportion to how much change and development they elicit from the protagonist. More specifically, they are characters who actively prevent the protagonist's progress towards their goal during much of the middle act (i.e., when things get really interesting). The antagonist may be another person, a force of nature, society at large, or even some aspect within our protagonist themselves - it doesn't matter so long as they stand in opposition to what matters most to our main character. Most importantly, though, they must always have clear and understandable reasoning for what they do and why it's crucial we, as the audience, see them as worthy foes. There is no victory without conflict, and where there is no conflict, victory must be meaningless!

The Static Character exists as a kind of mirror showing our protagonists back at themselves. They are often in opposition to their journey towards change and/or growth (i.e., the antagonist), but even when they aren't, such tension still exists because, generally speaking, these characters remain largely unchanged by the story's end (in terms of core values). From a dynamic character standpoint, they tend to be less interesting than both protagonists and antagonists precisely because we expect people in real life to grow over time; hence more interested when fictional characters do the same. Static characters exist to provide contrast and context for the protagonist's journey towards change or growth, usually reinforcing why it matters so much.

Symbolically they often represent what is holding our protagonist back from growing, changing, or learning anything during the course of their journey - most commonly, they are elements within themselves that prevent them from becoming the person they could be. These character types tend to be far less psychologically deep than either protagonists or antagonists; most static characters are little more than caricatures representing some specific aspect that must either be overcome, worked with, or accepted by whichever main character has brought them into the story. When deciding whether a given character is likely to be static or dynamic, we can look for them saying things like: "I've never done that before," "I'd rather not talk about it," and "No, I can't do that."

The Anti-Hero or Secondary Character is a special case of the Static Character (i.e., they don't change much either), but with one crucial difference: while static characters are simply uninteresting insofar as there's a little thematic challenge to them, anti-heroes provide some degree of narrative tension in terms of their personal moral code and how it might be compromised during their journey through the story. They often represent how the protagonist would like to see themselves; this may come across as altruistic, though equally often, we'll find them quite selfish instead. The importance of these character types rests in the fact that the protagonist's journey towards change or growth is often much easier when they have someone else who can act as they're better without actually having to grow themselves.

Anti-heroes also serve a logical purpose for any story in that they provide a convenient moral barometer that the audience can use to determine whether the protagonist is making progress. Where there are no anti-heroes, we must rely upon other characters (i.e., static characters) instead, which means their role will only be thematically supportive rather than independent from our main character's own development. In short, it's an important character archetype because, without one, protagonists would go around doing whatever they want and with no sense of personal accountability for what happens. 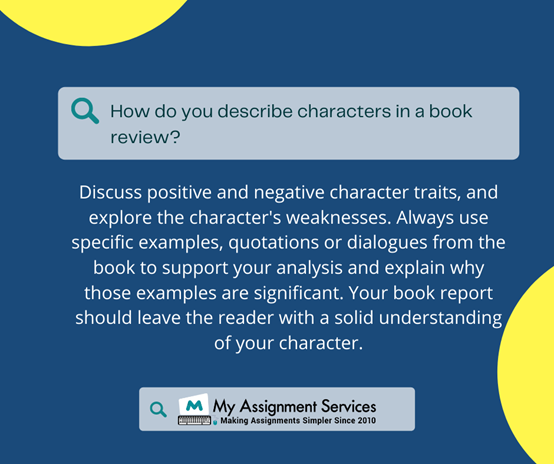 The Villain is, literally speaking, the character you would least like to meet. Though not always evil (i.e., the anti-hero), they are almost always plotting to do real harm either physically or psychologically - regardless of whether it's for good reasons or not. Few have any legitimate authority except perhaps within their own social sphere, and even then, only so long as no heroes are around who might challenge them. The villain may be an archetype in themselves, but more often than not, they represent some kind of opposition that needs to be overcome if our main character changes or grows beyond their present state. It could also be argued that villains are just representations of our own personal inner demons, but because most derive from outside ourselves rather than inside, there's an added dimension of interest which means we don't need to explore the concept as deeply.

Critical to any story is that there be a conflict, and this conflict must appear external rather than internal. If the protagonist isn't fighting something, then they're not really changing or growing beyond their present state, which is to say that without a clear antagonist, our story will lose all thematic distinction and become unmemorable - if not completely pointless. Even though most villains are static characters, it's important that they change at least once during our main character's journey towards self-actualization; otherwise, whatever happens, it doesn't matter because nothing about them has been affected by events either way.

The Sidekick is an interesting variant of the Static Character in that they are generally on the protagonist's side even if they might not always agree with what the protagonist is doing. They are often there to offer advice, support, or encouragement but rarely interfere directly in events unless absolutely necessary. Sidekicks do sometimes become anti-heroes themselves, but this tends to happen only at the end of their character arc, meaning that by default, they are simply supporting characters who can't replace our main character as the central point of interest.

An important thing to realize about sidekicks is that because they are also static characters, their role remains thematically supportive rather than independent from our main character's own development - i.e., we don't really care what happens with a sidekick because, by association, it will inevitably affect our protagonist whether they like it or not.

The Messenger is an archetype that has become increasingly popular in recent years, though their role is simple enough - to bring us the news at critical moments in our story. Messengers are usually other characters that don't get involved with events but instead receive information from someone who does before passing it on to the protagonist - either because they are ignorant of what's actually happening or because the protagonist should know about it too. The important thing to remember about messengers is that by default, they are merely relaying information rather than acting upon it themselves, which means their role remains thematically supportive rather than independent from our main character's own development.

Need Further Help for Your Fiction Assignments? Connect With Our Mentors Now!

Providing a story focused on a single protagonist with a clear goal/desire, it's still important to bring in these support characters; otherwise, the audience will have no one else to invest in emotionally. By creating a diverse cast of different types of characters, we can give our protagonists someone to relate to while also adding more depth and interest for the audience because each type brings its own unique benefits to the table. Static characters may be the most common, but they're by no means the best, which is why it's important to combine them with other types of characters so that every member of our cast can play a more efficient role within the story. The Messengers, Sidekicks, and other support characters should never overshadow the protagonist. They can provide advice or support, but ultimately, they must leave the decision-making to the Author's chosen hero. If you need any help or assistance with your film and television assignments or projects, feel free to connect with the mentors at My Assignment Services!

Consider These Topics For Your Next Debate!