Corruption: The Silent Tormentor That Brings Poverty and Ruin

Did you know that corruption kills more children than Diarrhea, malaria and pneumonia all combined?

In the simplest of terms, corruption can be defined as an immoral act committed by a person to acquire illicit wealth by misusing a public position entrusted to him. Corruption can have far-reaching consequences on economies, societal conscience and the social lives of the people. In places where corruption is rampant, there is equally widespread mistrust and lack of confidence in the establishment. Corruption also has an inevitable bearing upon the economic growth of any country as well as the morale of its subjects. 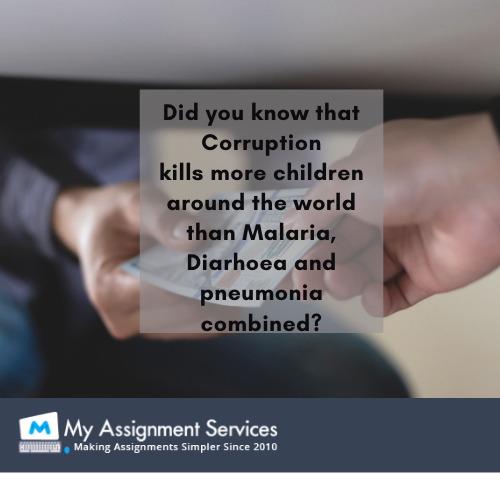 The most spiteful outcome of corruption however is on children. It is estimated that corruption causes around 3.6 million deaths every year of which it wouldn’t be wrong to say that more than 140,000 annual children deaths can indirectly be attributed to some of the other forms of corruption.

Corruption causes multifaceted economic problems that have stalled many second world economies and have brought others to the brink of ruin. Here are the problems caused by corruption:

Bogs down investor sentiment: Corruption deters private investors from investing their capital. In countries that are plagued by corruption, the investor sentiment is low and the general public develops a tendency to hold on to its money rather than invest it to get greater returns. Corruption affects the psyche of investors and bogs down the entrepreneurial spirit.

Forestalls economic growth: Corruption also impedes the growth of the economy. Due to a lack of confidence in the government and the prevailing establishment, people often evade their taxes altogether or partly. This leaves the government with insufficient money to invest in infrastructure, banking reforms and other key sectors that act as catalysts in the economic growth of any country.

People evading their taxes leaves the government to battle a double-edged sword. Whereas on one hand, they struggle to acquire the revenue which must be used to further the tasks of economic development, on the other hand, the government stands incapacitated to create the infrastructure required to catalyze economic growth. This in turn causes further turmoil and unrest among the public. Corruption, therefore, causes a vicious cycle of economic and social distress.

Economic growth is a product of adequate policies, public trust, robust economic policies and adequate business standards and protocols. The economic laws and policies are the pillars on which the economy of a nation is founded. However, when there are faults in the effective implementation of the fiscal or economic policies, it can bog down capitalists and investors from pumping their money into the economy thereby impeding its growth.

Political Instability: When the public is distraught with its government, it causes mistrust between the people and the very institutions that are put together to serve them. In countries where corruption is widespread, unrest and political instability ate commonplace. It can culminate into a serious situation because the government often does not have the required public support in taking major decisions regarding the economy, agriculture or society.

Brings Suffering to the masses: There is no doubt that corruption brings widespread suffering to people. When the fruits of economic growth are concentrated within the hands of a few, it inevitably causes distress to the masses. The government does not possess the necessary funds required to pump capital into the economy, boost the educational infrastructure and provide adequate health care facilities to the public, causing a lot of suffering people. Corruption is therefore also directly responsible for bringing families to ruin.

Kills and Impoverishes Millions: Corruption also kills and impoverishes millions around the globe. According to a report published by BBC News, around 3.6 million deaths globally can be attributed directly to corruption.

Due to the menace of corruption, governments lose out on billions of dollars in revenue. This is the money that could otherwise be spent on infrastructure, health care, education and social welfare. In a corrupt economy, the government is only able to collect a fraction of the actual due revenue.

When the cost of business is already high owing to corrupt practices, middlemen and agents, businessmen are rendered incapacitated to pay their taxes and revenues causing corruption to thrive further.

Several measures are being taken around the world to tackle the menace of corruption. However, a problem which is entwined into human nature as intrinsically as itself, corruption cannot be removed completely in the actual world. a world completely free of corruption is a utopian concept. The G20 anti-corruption meet held in October 2020 between world leaders saw ideas on measures that can combat corruption and corrupt practices. It has been largely agreed that if there are effective ways found to combat the secrecy that allows corruption to thrive, the backbone of corruption can be broken.

It is a part of the curriculum of law students to study about corrupt practices and ways to tackle them My Assignment services are among the most trusted names in providing law assignment help to students to help them go about their assignments on corruption.

What Happens if I Fail an Assignment?