What are the Differences Between Temporal vs Spatial Summation?

A summation can be defined as the after-effects of several electrical impulses transmitted through a junction composed of nerve and muscle cells (also known as neuromuscular junction). A single stimulus is not strong enough to activate a body function, but many stimuli together can evoke a response. In order to achieve action potential, the required voltage of electrical stimulation must be achieved. The threshold is attained by temporal and spatial summation put together.

The temporal summation facilitates successive PSP integration. It can be elaborated by shooting action potentials in a presynaptic neuron and analysing the resulting EPSps.

When the strength of muscle contraction changes by changing the size and quantity of motor units, these motor units help maintain a continuous when some are counter, and others are relaxing, which helps defy the fatigue that the body experiences. 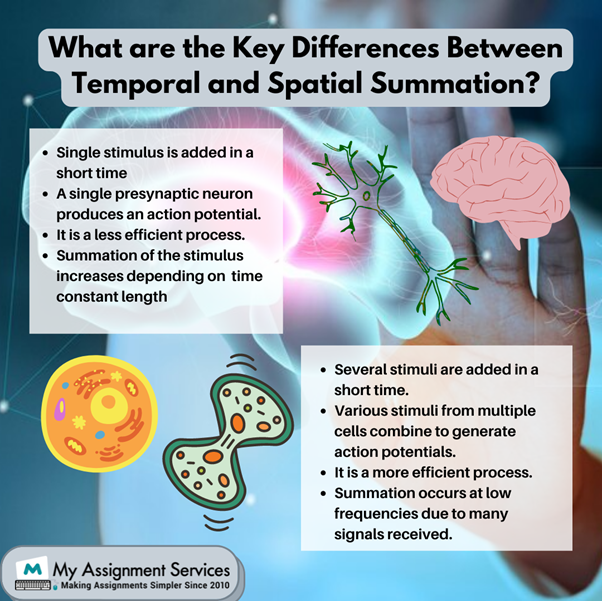 Temporal vs Spatial Summation: List of A Few Similarities and Differences

Temporal and Spatial summation depends on the number of stimuli and the time to receive each successive signal. One presynaptic neuron is involved in temporal summation, and spatial summations are involved. Still, the final goal of both of these works is to generate enough action potentials to stimulate the motor nerves. Both summation forms minutely differ, so you must also pay attention to the similarities.

Explain the Mechanism Of Postsynaptic Summation And Action Potentials?

The basic mechanism of the postsynaptic potential can be divided into three sub-portions depending on the input, integration and generation processes. 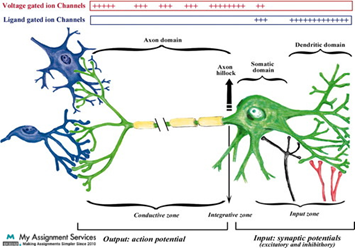 The summation of various postsynaptic potentials allows the neuron to generate an electrical signal, and the inhibitory and the excitatory synapses react. The final sum of synaptic inputs produces action potentials that further depend on the balance between inhibition and excitation. The results achieved by adding all excitatory and inhibitory postsynaptic potentials must be sufficient to achieve the threshold required for generating action potentials. Generally, the balance between the inhibitory and excitatory potentials continually changes depending on the number of synapses active at a certain time.

The summation is vital for body movements in humans and as the proper body movements depend on the correct timing and generation of action potential to regulate various movements. Athletes and professional sports players spend countless hours training their bodies to bear the stress of extreme and rapid movements and train their brains to stimulate the neurological system to generate desired force and body movement.

New innovative research has developed brain-computer inference technology, enabling patients to use their brain electrical signals to control a computer. Such groundbreaking innovations are a good example of signal summation, the next big step in medical science.

Simultaneous summation happens when an athlete moves multiple parts of the body together. Also known as spatial summation, it generates multiple stimuli simultaneously that produce action potential quickly to facilitate the athlete’s body movements. An example of temporal summation can be the activities that require less body movement, like reading. People usually sit in a quiet, deserted space for reading. Such spaces only activate the visual stimuli, and hence more time is taken to produce action potentials.

Read more of our live blogs and become a part of the trending discussion among students worldwide. Get expert insights on manifold courses and affordable academic writing assistance only at the My Assignment Services website. Enrol today to access our extensive library that holds free sample case studies, books, sample solutions, and more.

What Are Some Controversial Discussion Topics in The Recent Trends?

What Is Report Format For Assignment?