What Are the Different Human Body Movements in Physical Education?

'Physical education is often the most hated or most loved course in academia; it can almost compete with mathematics for the number of divided opinions it entails. Whether you participated actively or dreaded this particular class, you can't deny that sports or any physical activity are often one of the most exhilarating moments of the day.

Did you know that according to WHO statistics, one in every four adults does not engage in the global advised amount of physical movement? Due to quarantine, this rate of low physical activity has decreased even more.

As WHO says, all body movements, even those during leisure time, daily travel from one place to another, or the physical movement in daily working - moderate and intense physical activity can improve your health condition. Several muscle movements take place in the out body during any physical activity.

But, what are the different body movements? Some human movement examples and the fundamental movements required in physical education are a few concepts that we'll go over in this blog so read forth to get more insight. 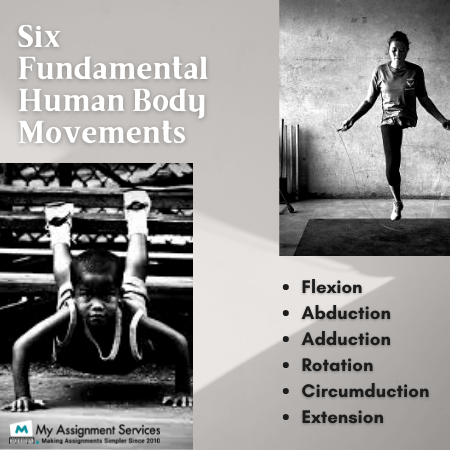 What are the Fundamental Human Movements that We Execute Every Day?

Movement - in layman's language - can be defined as the movement of a physical entity from one point to another. The same occurs without bones and muscles during body movement. There are six fundamental types of movement that the human body is capable of, and we execute all of them in our daily life regardless of strength and agility.

Also known as abduction, we move forward or backwards from our central alignment while pulling a weight towards or away from our body. The pull human movement can be a vertical or horizontal pull depending on the direction of the force. During these movements, the muscles at work are usually the upper-mid back, forearms, forearms, rear shoulders, and biceps.

During this movement, we are moving closer to the centre of gravity of our body, also called Adduction. Instead of pulling, we push a weight away from your or the inverse - moving away from your body. Similar to pull, this motion is executed in both horizontal and vertical directions. The target muscles of movement are the chest, front shoulders, and triceps.

Also known as Depression, and considered the most complex human body movement. The body moves slower than the reference axis, and it requires the movement of various muscles. The glutes, hamstring, quadriceps, and core muscles function as we squat.

A lunge is often called elevation. For this human body movement, for example, you will move over and above your central axis. Thus, such movements are often considered disadvantageous as they require greater stamina, agility, and flexibility. The lunge targets the glutes, core, hamstrings, and quadriceps; it stimulates the \muscles to an intense degree due to the stance.

There are two forms of movement in the hinge movement; it is clear by the name that it works like the hinge- forward and backward motion. Also called Protrusion or Retrusion, you move your upper body by bending backwards and forward. The muscle movement in a hinge movement is the hamstrings, lower back and the glutes.

Rotation is moving in a circular motion; based on the direction; it is often called, Lateral (away from middle alignment) or Lateral (towards the central alignment). Rotational movement is possible for various muscles and joints of the body; various muscles are in motion depending on the movement site. Shoulder muscles, biceps, triceps and upper back muscles for arm rotation. Thigh, lower back, core, and glutes are a few muscles that move in waist rotation exercises.

It's literally walking, and several muscles are at work while walking. Walking must not be underestimated, as WHO suggests walking is an effective exercise for maintaining a healthy heart. Walking can be done at various places, jogging, running, and sprinting; each has a different set of muscles at work.

People who show insufficient activity levels have a 20 to 30 per cent more risk of death when compared to people with sufficiently physically active daily lives. - WHO (World Health Organisation)

Knowing different body movements will help you curate the best-suited exercises based on your flexibility and the set of muscles you want to work. The human body is capable of various body movements, and it is a useful tool for physical education students. The more you work on your movements, the more muscle memory you will develop, and such movements will get easier by the day.

Nursing students must submit various research papers, case studies, lab reflections, essays and other assignments. So many writing and reading assignments can get overwhelming; if you seek nursing assignment help, you may fill out the enrollment form. Get live guided sessions and free academic resources for your assignments.

What are a Few Examples of Human Movement?

The various fundamental body movements discussed in the section above are the basic movements almost that every human can do. But, being a professional sports player or if you want to indulge in sports require repeating a set of movements repeatedly hundreds of times almost every day.

Sports don't seem as fun anymore? Don't fret as a professional athlete doesn't develop another set of muscles or a whole different body, but they work on getting their bodies used to the movements required for the sports of their choice, hence the intense training. There are a few motions that various sports require. Some examples of putting these human movements in practice are

Flexing a bone joint and the adjoint muscles to straighten it is called extension. The joint angle attains a complete 180 degrees or slightly more in this movement. The elbow of a player throwing a shot put or the knee of a high jumper depicts such physical movement.

It is the movement away from the central alignment of the body. The same movement occurs at the hip and shoulder joints while executing a jumping jack or when a golfer goes in for an Airmail shot.

Also called a rotation, as discussed above, for such movements, the limb or waist moves in 360 degrees, i.e. a complete circle. Human movement examples of this movement are the shoulder joint of a tennis player executing an overarm serve or a player bowling a cricket ball.

In this movement, the ankle joint is flexed to bring the toes closer to the shin, and they are curled upwards, reducing the angle of the dorsum of the foot. A Dorsiflexion isn't necessarily used for specific sports but rather for stretching the calf muscles and the ankle joints. Reverse dorsiflexes called Plantar flexion are used by ballet dancers to keep the standard ankle posture in their forte.

According to the WHO advisory, people ages 18-64 years should engage in at least 150 to 300 minutes of moderate to intense cardio exercises.

So, these are a few of the unfathomable examples of the physical movements that occur in an athlete's body during executing the required actions for a specific sport. Also, an average individual with no prior knowledge or experience of professional sports will have the same muscle movements when executing similar actions; the impact and agility will be different due to the obvious. 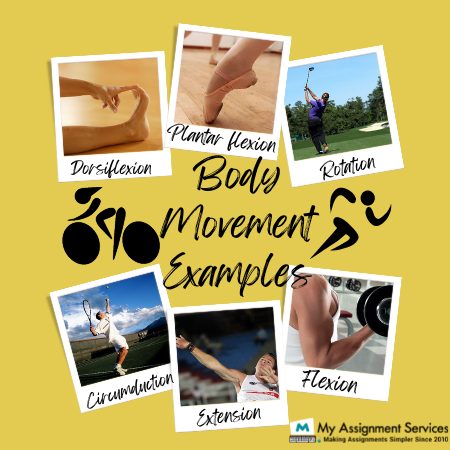 How are the Different Movements of the Human Body Beneficial?

Various exercises are beneficial or damaging for each of us depending on the muscle movement and wear-tear. From the stay at home exercises that came in handy during the home quarantine in the Covid crises to the five days, week work routine that many follow, these entail a few common benefits.

If you are regularly physically active, you may:

Contrary to popular beliefs, Pregnant women should limit the amount of time spent sitting; rather, replace it with low to medium intensity exercises. WHO

The changes in physical activity levels start with changes in your daily routine. Walk half a mile more than you did yesterday, choose the stairs instead of the elevator or add activities that involve physical human movement, for example, swimming or yoga, to your routine. Starting slow and steady will help you develop the required strength for intense exercises; overexerting right from the start may result in temporary to permanent injuries. Stay focused and stay active, and know your limits.

Nursing students struggle with completing their assignments. There can be many reasons, like a lack of time or reference materials, inadequate knowledge of the subject, and formatting difficulties. If you're going through the same, you can get free resources and affordable assignment assistance from professionals in the healthcare sector. Fill out the enrollment form to get nursing assignment help today.

How to Write a Division and Classification Essay?