Different types of Purposive Sampling You Should Know

Purposive sampling is a research strategy that allows a sampling frame to be developed by the researcher. The term purposive comes from the idea that an aim or purpose is being imposed on the sample, and it reflects a desire to have the sample closely fit the characteristics of some population. In most cases, researchers use purposive sampling in combination with non-probability methods of data collection, such as interviewing or focus groups. In these situations, samples are chosen based on specific criteria rather than selected randomly from within a given group.

Purposive sampling may also be used along with probability procedures such as surveys and polls whenever randomization is not desired or possible. Purposive samples can sometimes provide a quick answer to a general question, but they are not used to draw conclusions that can be applied to larger groups. Purposive sampling is often referred to as judgemental sampling because humans (rather than random chance) determine the types and numbers of people included in the sample. Let’s see the purposive sampling method types and techniques explained. 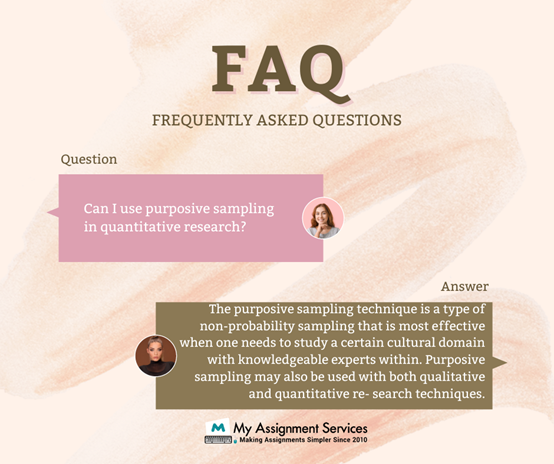 Purposive sampling is most commonly employed when researchers conducting descriptive research require qualitative and interpretive insights and feel this cannot be achieved through statistical or quantitative means. This does not mean purposive sampling works best for such aims; rather, it merely acknowledges that such applications are quite common given those aims. There is much debate about whether it is appropriate to use purposive samples for such studies, as reliance on this type of sampling may introduce bias and reduce the external validity of a study.

There are many different types of purposive sampling, including: "convenience", "snowball", and "opportunity". The following is an explanation of each type, along with its relative strengths and weaknesses:

"Convenience" samples are those that use people or things that happen to be conveniently available at the time. This method can lead to a sample full of homogeneous characteristics as those who come to hand tend to share similar characteristics, such as age, race, religion, etc. When conducting your research, you should ask yourself questions such as: Are there likely to be enough members of my target population willing and/or able to participate in the study? Is the sample too homogeneous?

"Snowball" samples are created by asking participants for referrals of other potential respondents. This method can be very useful if your target population is difficult to define or access and/or has many hidden members who will not be revealed through standard research methods. For example, if you were researching youth culture, it would be much easier to gain access to hard-to-reach groups (such as 'skaters') via known contacts within this group (i.e., friends) rather than trying to find them yourself. It is important that snowball samples are approached with caution. However, they should never replace other forms of sampling due to their lack of generalizability, and they increase the chances of introducing sampling bias.

"Opportunity" samples are those in which participants are selected because they are readily accessible, easy to work with, or cheap to recruit. For example, if you wish to conduct market research on social media users, it would make sense to use Facebook as your initial purposive sample as this is where most social media users reside - access would be cheap/easy due to the fact that Facebook could provide you with a list of potential participants based on their demographic information. Similarly, if you were researching university graduates who had just begun their careers, it may be much easier to find them through LinkedIn rather than trying to find them personally. 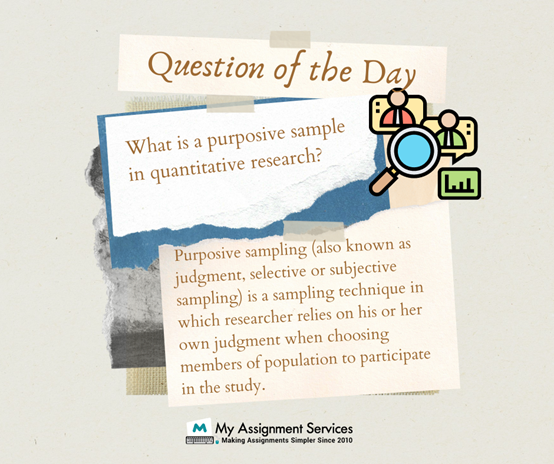 Problems Associated With This Approach

There are various problems associated with purposive sampling, including:

Self-selection bias occurs when respondents have an influence over the characteristics of the sample. This may lead to any observed relationships being biassed due to systematic differences between those who chose to participate in the study and those who did not. For example, suppose you were conducting research into university undergraduates' alcohol consumption behaviours. In that case, it is likely that only "drinkers" would wish to participate in your study - this means that any observed relationship could be due to the fact that drinkers are more likely than non-drinkers to participate in such studies, not due to a causal relationship between the two variables.

Response error occurs when the sampled population fails to be accurately represented by those who choose to participate in a study. For example, imagine you were researching social media users but only managed to recruit people from Facebook (a convenience sample). The participants recruited may well consist of heavy users of Facebook; this group would likely differ greatly from those who chose not to use Facebook at all - meaning that your resultant sample is unlikely to represent the views and behaviours of both groups equally, and any observed differences between these groups could be explained by their different levels of participation on social media rather than a causal relationship.

Most top-rated humanities assignments help mentors say that homogeneity can occur if information about potential participants, which may be useful for determining the appropriateness of that individual for inclusion in a certain study, is not gathered. For example, if you are looking to conduct research into university students' dietary preferences/behaviours, it would be useful to know whether these students are vegans or meat-eaters. Asking participants only about their dietary preferences may result in a very homogeneous sample due to participants all having the same interests - this means that any observed relationship between your variables of interest may be due to this lack of heterogeneity rather than causality.

A major problem with purposive sampling is its limited generalizability; as your sample was constructed specifically for your research project, it cannot be assumed that the results will reflect the opinions and behaviours of the wider population (unless this is known and communicated as part of your study).

It is also important to understand that, given a specific sample size N, there are more possible samples from an infinite population than from a finite one. This means that if you have a limited amount of resources/time/money available to conduct your research, purposive sampling may not be the most efficient method for attaining a representative sample due to its low levels of generalizability. An alternative approach that can provide better representation would be by using random sampling methods such as simple random sampling or systematic sampling - these methods involve randomly selecting participants from a list containing all members of a population.

As can be seen, there are various problems associated with purposive sampling. These include self-selection bias, response error, sample homogeneity and limited generalizability. It is important to consider these factors when deciding upon a method of data collection for your own research project! If you are struggling with your humanities assignment, our team of experts can help. We offer professional help sessions that will take care of any query related to your essay or research paper. We’ve helped a number of students with our humanities assignment help sessions, and we look forward to helping you too. Remember, it’s always better to get help early on in the assignment so that you have plenty of time to make revisions.

If you have a question about your assignment, we'll be happy to answer it. Our team of experts is ready and waiting to guide you through creating the perfect humanities assignment as per your professors’ needs. We're available 24/7 so that no matter when or where you need assistance, we are just a click away!

How Are Transverse Waves Similar To Longitudinal Waves?