With the advent of the year 2020, began the crippling confrontation of the world with the new kind of disease called Covid-19, a.k.a. The Coronavirus. And ever since then, we have only been trying to keep things together. It all started when Wuhan and Hubei, two of the most important cities of the People's Republic of China, were put under lockdown. Heavy measures were imposed to suspend both inter-state and intra-state movement, in hope of containing the virus in due time. However, unfortunately, nobody at that time knew that the coronavirus is here to stay. Only after a few months, we began to see the repercussive disturbances to the Chinese economy, as well as the nefarious venture of the virus into other world economies. This foremostly led to the international movement restrictions, and thereby the supply chains began sustaining the adversity. In the Australian economy, the jolts were initially felt by domestic tourism which naturally relied on the flying-in of overseas students to Australia, especially from China.

With JIT discretionary expenses among Australian exporters of sea raw materials, being also the consequence of the disruptions in China, the inventories started adopting a lowered occupancy, followed by hurting the global manufacturing supply chain. Disturbances were also communicated to the commodity prices, resulting in them to sore. The Australian Dollar also depreciated against the US Dollar to an unprecedented degree, worse than the depreciation sustained by the AUD during the 2008-2009 global financial crisis.

The Australian Economy - A Covid-19 Overview

Fast-forwarding to this day, substantial effects have been endured by the world economies, with job losses, obliterated supply chains, demands hitting rock-bottom, swelling debts, disbanded industries—like tourism and hospitality, global education, etc. And, amid the horrifying conditions, Australia was doing comparatively 'great' until it went into recession, that too after almost three decades of sustained growth. In early September only, Australia's economy recorded a plunge of 7% in the GDP. The plunge was indeed beyond the predictions, but that's not all. The historic fall in the Australian economy was also catalyzed by the private undertakings, a huge chunk of which were closed down or locked as a part of measures taken to restrain the spread of COVID-19 pandemic. The private demand deprived the economy of 7.9% of GDP alone, while the surplus from trade, as well as the heightened Australian government's spending, contributed a total of 1.6% of GDP back.

Coming to the specific industries enduring their part of losses, transportation, recreation, and tourism/hospitality were the worst hit, and this is exactly where no compromises were made in Australia either. In other words, the Australian economy had an analogous situation in these sectors, and could not cope with it. While, again like the rest of the economies, and at times better, —the finance, ownership, and education sectors were able to moderately save the day by still being on the rise. The below chart can give out an idea of how the situation has been like for individual sectors in Australia. 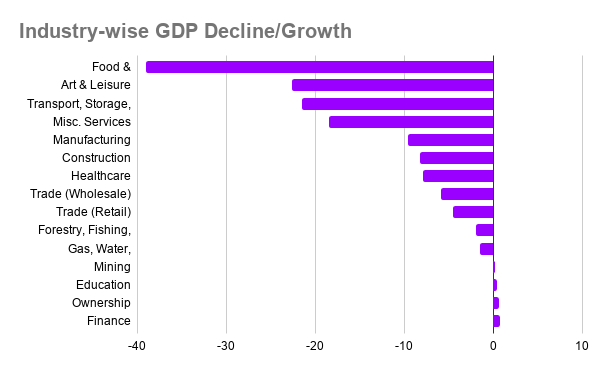 Setting the Australian Economy in Context

The U.S. economy sustained its one of the most awful periods in the history of its reign. The economy was already down by 32.9% in July, way before the Australian economy took a minor dip. Such a difference in the dropping rates between the two economies is seen as a massive one by the economists. But this was not all. Let's have a quick peek into it.

4.    The UK, Canada, Mexico all have a whopping 70%-and-more drop in shopping activities

6.    The recovery and the vaccine is still far

These were just the starters. In the United States, more than 24% job losses were recorded. Big names like Disney (which recently furloughed 40k workers), Best Buy (which by the way did the same with 50,000) were hugely responsible. In a gross number, 39 million people in America have lost their source of livelihood. Australia, on the other hand, had none of the extremities to face. Therefore, to sum it up, the mightiest economies are on their knees, and yet Australia has been able to stand through the storms. All the economies are now in their recovery phases though. And, if you are thinking of it, the World Health Organization has also, finally, declared that the vaccine would be officially gone into mass production by December, this year only. It is the first time the WHO has been a little optimistic about the whole situation.

Australia has indeed been handling the coronavirus pandemic the most graciously. Soon, at a much lower economic expense unlike what the rest of the modern economies of the world have borne, Australia would be back on its stable routine. Of course, it would be accompanied by greater unemployment rates, and heightened debts, such a kind of loss all other economies are willing to pay in return for pre-covid-times-like stability. Moreover, since the pandemic of covid-19 is in its declining phase in the everywhere else too, it stands testified that the international demand and supply would also recover, despite being a slow and non uniform one. However, given the worsened state of affairs between the US and China, Australia's friendship with China may also have to bear the brunt for some time. Amid all the aforementioned 'shifting backdrops', Australia's economy is going to have less than 'usual' number of choices, but the recovery would still be a speedy one.

Role And Effect Of Homework On Student Achievement

International Students in Australia can Extend Their Post-Study Visa