Average Life Satisfaction and GDP Per Capita - What are these Terms?

As discussed, linear regression has to be applied in such assignments and the two variables that will be used are average life satisfaction and GDP per capita. Before establishing the relationship between them, let us get to know what these two are.

The Gross domestic product (GDP) per capita is the measure of the total economic output for a country that depends on the number of people residing in that country. Formulating it, it will be the total population of the country divided by the GDP. Per capita real GDP=Real GDP/ Population Hence, it is an effective way to get to understand how a flourishing standard of living is prevalent in specific regions. It gives an idea of prosperity in different countries. As per our economics assignment help experts, GDP per capita is one of the most vital concepts that is used in an economics assignment. Now, we are good to go. Finally, let us try and establish a connection between these two concepts.

The relationship between both these imperative concepts in economics is debatable. Though it is a well evident fact that life satisfaction depends on several factors like personal-level, socio-demographic as well as Socio-economic character traits like income, age, education, etc. However, whether or not average life satisfaction depends on GDP per capita or not, that is still questionable. Based on Easterlin’s happiness income paradox, it is established that there is no influence of economic development over life satisfaction in the long run. On the contrary, there also exists an alternative viewpoint that economic development is significantly associated with life satisfaction. Using instances from both these viewpoints, let us now talk about a quantitative analysis economics assignment that has been recently solved by one of our economics assignment help experts for the reference purpose of students.

This is an assignment task that students are required to write. In this report, you have to examine if there exists, any statistical association between average life satisfaction and GDP per capita. For this, you will be given a linear regression assignment data in the form of a spreadsheet. You have to use it and write a 1200-words report. The weightage for this report is 40%.

There are 6 sections in this report. Let’s discuss each of these in detail. You can take help from our experts for writing solutions to any of them:

The first section of the report acts as a clear explanation of the purpose that it holds. As mentioned in the question file, the relationship between average life satisfaction and GDP per capita is to be established and this is the purpose.

As you are playing the role of an economist working in the OECD, in the background section of the report, you need to make use of a literature review that has helped you establish the purpose. Also, you have to state the reasons why you got interested in studying that particular issue.

As per our economics assignment help experts, this section is considered to be the trickiest one as it talks about the data source and the empirical approach that you have used to establish the relationship between the two concepts.

Considered to be the heart and soul of this report, the result section summarises the findings of your statistical analysis. 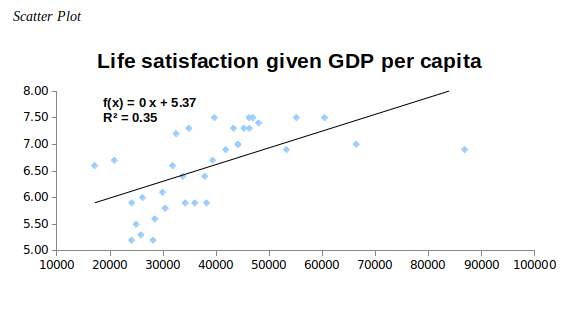 Here, a brief overview of the result is included from which we can easily get the strengths and limitations of the quantitative analysis. Based on this consistency of findings is calculated.

In this last section of the report, our economics assignment help experts suggest three to five well-researched recommendations.

Hope we could make this complex topic a bit easier for you in this blog. My Assignment Services is a one-stop destination where you can get your hands on a number of value-added services with a high-quality reference assignment solution for the same question file or any similar file. For more than a decade now, our economics assignment help experts have always assisted students in combating all their assignment perils in a jiffy. So, what are you waiting for? Do talk to us and grab a full sample of the solution for this question today!