Essay Topics On the War in Afghanistan

“There was a clatter of noises on the roof. To me, it was the sound of raindrops pitter-pattering with all its strength, but in reality, it was the shower of bullets followed by the mass destruction that followed with the Afghan war”. I was left blank after this. I didn’t know where to get authentic information for my essay, said Martha, a student at Deakin.

Writing an Afghanistan war essay has never been easy for students, irrespective of the type of essay they are given to write. Just like Martha, are you also interested in getting Afghanistan essay samples, or a quick list of some of the most heart-throbbing essay topics on the war in Afghanistan, then your search is over now. 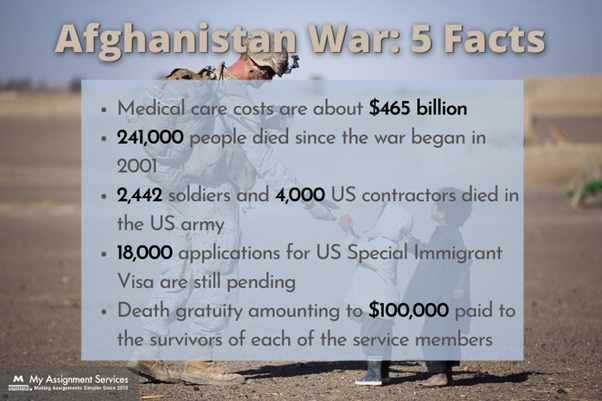 In this blog, we will discuss an overview of the war in Afghanistan and see what all has unfolded for the civilians. Also, we will provide you with a comprehensive list of Afghanistan essay topics associated with the war to make things easier for you. So, let us begin.

War In Afghanistan Essay Topics: A Land Under Constant Turmoil!

International conflicts have always been among the trending essay topics for students. Under this, there are several broader categories like the American Afghan War, War in Afghanistan, 1979 Soviet Invasion of Afghanistan that have always taken a toll among students.

Can you imagine residing in a place where Tribulations and terrorism have become a normal, day-to-day activity? However, this is why Afghanistan has become a land that is under constant turmoil.

The Afghanistan War: A Never-Ending Series Ranging Between 2001-2021!

The dilapidated condition of Afghanistan clearly signals the massive destruction that took place within the long twenty years. The War in Afghanistan is one of the most heart-wrenching conflicts that occurred between 2001-2021 in Afghanistan. It began in the year 2001 when the US and allies decided to invade the region and overthrow the Islamic Emirate that was under the rule of the Taliban. After struggling for over nineteen years against NATO, and the Afghan Armed Forces, the Taliban finally regained their power in the year 2021. Interestingly, it can also be referred to as the “longest war in US history”!

History of the War in Afghanistan: A Sneak Peek

It was imperative for our online essay help experts to gain a comprehensive hold over the history of this war to be able to help students garner authentic information for writing their Afghanistan war essay.

A lot of times, students also get to write essays about Afghanistan culture. We will only know about the different sections of the society that were being affected by this war in Afghanistan by knowing how this event preceded and took its form. So, let us see the trajectory of this historic event and get to know something more about the Afghanistan war.

When you have already come across the history of the Afghanistan war in the above section, it will become a lot easier for you now to understand why our essay writers consider the following topics to be the best ones in this field.

Over the years, we have tried our hands over a variety of essay topics, but when it comes to writing an essay on the Afghanistan war, then these are some of the most relevant ones as per our online essay writing help experts.

These are some of the most remarkable essay topics on war in Afghanistan that we have dealt with in the recent few months. Other than these, you can even come up to us with your own topics. Rest assured that our team of academic experts will take not more than a few moments to work upon the topics and provide you with instant essay writing service whenever you need it. Now, let us proceed with one of the Afghanistan essay samples that we have recently curated for one of our clients in Australia.

Here Is An Afghanistan Essay Sample For Your Reference

As you can see in the image below, this is how our online essay help experts begin with such essays. Talking about the background of the war in Afghanistan, we have started off with an interesting fact that is enough to grab the attention of the readers till the very end of the essay. 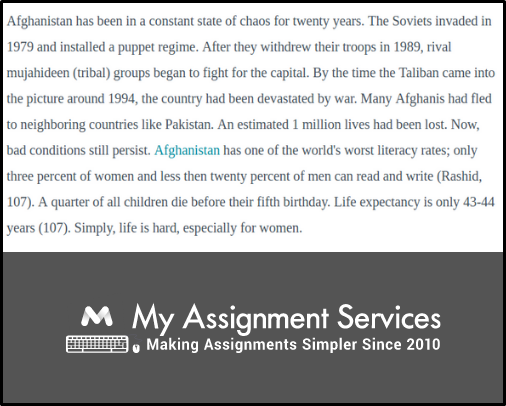 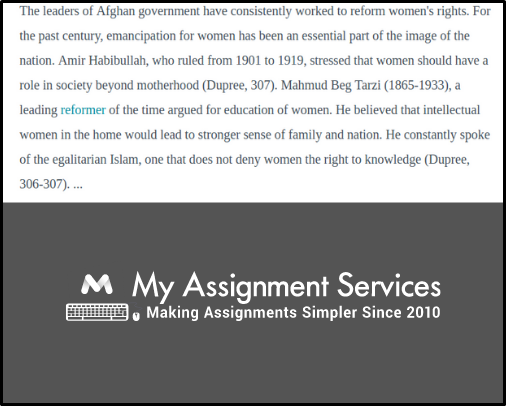 For instance, you can notice how we have discussed the emancipation of women in the Afghan war here in this section. This is just one of the aspects that we have discussed here. There are plenty of such aspects that need to be discussed in these essays. To get complete essay solutions from us, all you have to do is hand us over with an essay topic and the rest of the work will be done by our online essay writing help experts.

Choose MAS Certified Writer To Do Your Afghanistan War Essay

You should hire us because each of the experts who work in our team is hand-picked according to the requirements of students. My Assignment Services is the leading academic organisation in Australia that is bespoke with stellar results for students. When you get in touch with us, there are so many lucrative perks that you can unlock from us. Some of them include:

There’s more to grab from us. Fill up the order now and we will get back to you with all the answers you need from us. Our MAS certified writers will be happy to provide you with an Afghanistan essay sample at the earliest possible time.

What is a Merge Sort Algorithm?

A Quick Guide to Impromptu Speech