Google Open Letter to Australians sparks a furore. The keyword is “To PAY or NOT to PAY”

Did you find something unusual with your Google home page on Monday? Get the real story behind the latest tiff between the ACCC and Google about the NEWS MEDIA BARGAINING CODE.

The Alphabet subsidiaries Google Search and YouTube along with tech giants: Facebook and Amazon are fighting similar battles in Australia and in other countries too, including the United Kingdom and the USA.

While it may affect your data privacy on the internet but the real fuss is about a few billion dollars to start with…Learn More. 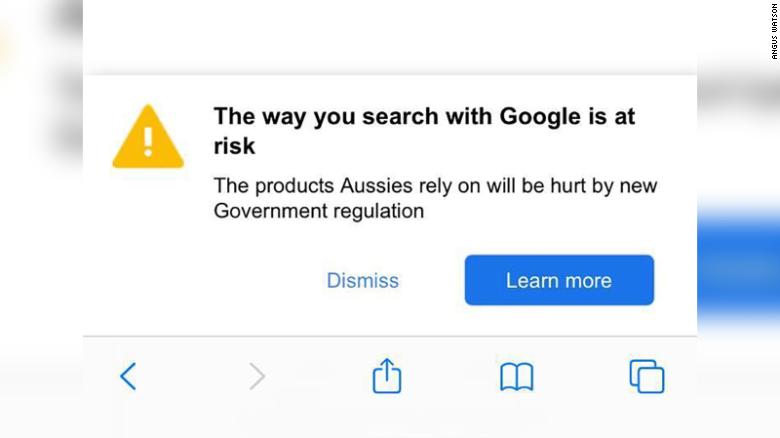 Google’s Open Letter to Australians. What are they trying to say?

Google’s MD for Australia, Mel Silva has penned a scathing write up to bring the fight into public arena whilst warning Australian Citizens that with the proposed law, ‘News Media Bargaining Code’, Australian Trade Watchdog ACCC (Australian Competition and Consumer Commission) is forcing Google to share its Australian user’s private data with big news corporations. She further claimed that the code will affect the open-sourced character of Google’s Search algorithm, giving an unfair advantage to large media corporations in Australia.

These are some serious accusations by a Corporate Senior Profile holder at the Federal Government. Here are the excerpts of the blog: 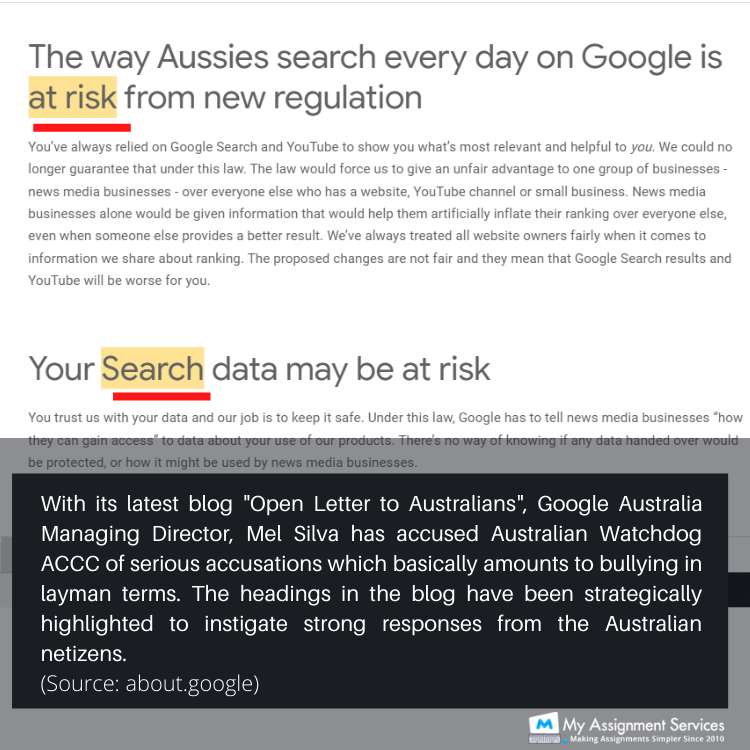 Why is Google so worried about the New Regulations by ACCC?

Well! It should be.

Google Search business along with its video-sharing platform YouTube posted revenue upwards of 1.24 Billion Dollars from Australia in 2019 alone, majority of it; 719 Million Dollars coming from advertisement business. The new federal law; if enforced will make Google share the ad revenue with the large Australian News Agencies for the news pieces and articles that it uses; under the purview of copyright content law.

The enforcement of such a law will not only hit the revenues of the most popular search engine in the world; what worries Google the most, beyond the monetary losses is that if such legislation is passed in Australia, it will set a precedent and other countries will naturally follow the suit.

Google, Amazon and Facebook are already facing similar anti-trust allegation by the US Congress and in other countries including France, Germany, and Spain. A Law such as this, if successfully regulated will make every government in the world, take up the fight with the Tech Giants with higher aggression. 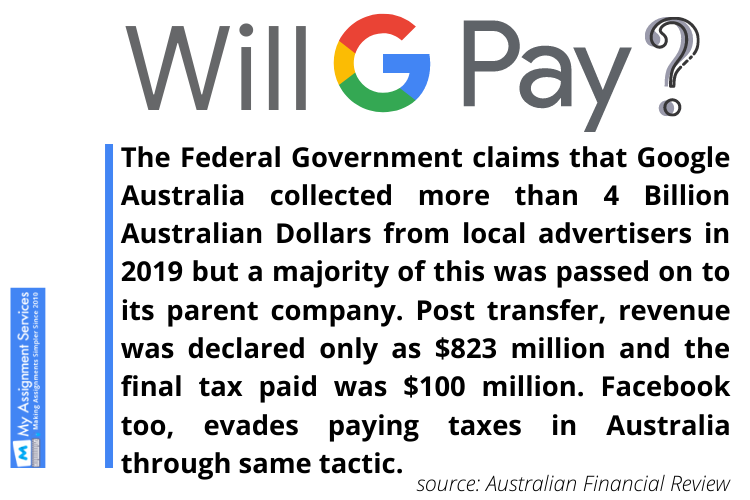 What does the new Bargaining Code mean for You-Tube community in Australia?

YouTube APAC Head, Gautam Anand too, posted a blog supporting Mel Silva’s views. Let's see what is his take on the code and what he thinks will be the impact of this new regulation on the YouTube creators and its Australian community in general.

Like Silva, he has profusely implied that the regulation will hurt the very liberal nature of YouTube where currently everyone is equally qualified to generate views and make money as long as their content is appreciated by viewers. With the implementation of the ‘News Media Bargaining Code’, this will change and Large Media Houses will have power over the organic YouTube creator community in Australia.

What is the ACCC ‘s side of the story?

Australian Competition and Consumer Commission was quick to retort to Google’s Open Letter through multiple online blogs published but naturally by almost all major news websites. ACCC claims that Google and YouTube Management is spreading misinformation about Data Privacy and the free products being at risk. This how they responded:

ACCC claims that Google and other tech giants are unfairly disrupting the News Industry and driving most agencies to the verge of shutdown. Their logic is simple that the journalists being the original content creator are entitled to get a share of the revenue that the search engine generates as Google does not employ any journalist of their own. This is all the more relevant in the times of a pandemic where most media houses have seen their money coffers being dried up.

The billion-dollar bone of contention

What’s the fight between Australian regulator ACCC and Google really about?

The ACCC argument behind the new regulation is to ensure that Google Australia fairly shares the ad revenue generated by the company with the news generating entities as they are the real creators of the content in this case.

While Google’s argument is also robust; something they call as ‘Two-Way Value Exchange’. The search engine claims that with more than 3 billion clicks being forwarded to Australian new websites in 2019, News Companies are benefitting much more from the cross-content than their self-generated content.

On the revenue side too, Google argues that only 1% of the search queries they receive from Australian users are News related and for that, they are already paying a fair sum of money to the agencies along with the large amount of free traffic which enable media companies to earn ad revenues from their respective online platforms.

The draft for The ’News Media Bargaining Code’ is still open to discussions and the matter is in the court. Let us all hope that whatever the outcome, both: the company and authorities must keep the best user experience and the concerns of data privacy at the forefront.