How To Identify Gothic Literature?

“It was a dark and stormy night… “, “The door was left ajar, while the shadow of a sharp object was seen”. As you read these lines, a mystical, dark, horror image gets formed in your mind. This is what Gothic literature is known for. There are several elements of Gothic literature that help students in distinguishing them from the remaining genres in literature. Do you know them all?

Why worry, when our academic writing help experts are all at your disposal? A team of inquisitive minds and expert hands, we are an experienced panel of over 2,500 bonafide writers who have been engaged in delivering flawless academic guidance to students in Australia and worldwide since 2010.

My Assignment Services is the name to trust when you are stuck with any of your academic queries. In this blog, we will be discussing some of the salient elements of Gothic literature so that we can satiate your thirst for knowledge. You can rely upon us, and we assure you that we won’t let any of your doubts go unanswered.

A Brief History of Gothic Literature

Medieval times are characterised by ornate and intricate infrastructures and architectures. Initially, the term “Gothic” was used to describe the buildings and monuments in France during the 12th century. However, it was not until the 18th century Romanticism era that the word started being used in literature. 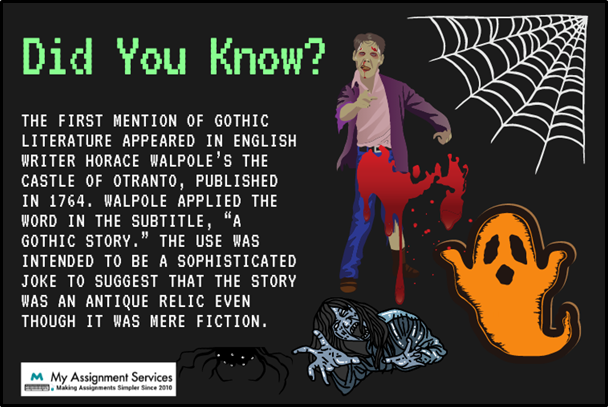 Horace was the one who used this term to imply ‘barbarous’. Soon, “Gothic” started to be associated with death and supernatural elements. This became the foundation of many of the novels of the Bronte sisters, Allan Poe, and many other famous writers and authors.

So in a crux, “Gothic literature” can be defined as one of the most eeriest types of dark romanticism during the late 17th century.

These are some of the characteristics of dark romanticism.

Now, it will be easier for you to understand Elements of gothic literature better. Our academic writers do not believe in leaving a single stone unturned for students all over the world. Let us see what are the aspects that help us in underlining Gothic themes with ease.

10 Elements Of Gothic Literature That Are A Must To Know For You!

Obviously, you are interested in this genre in literature which is why you have come this far. Therefore, it becomes even more imperative for you to know the Gothic literature elements so that you can easily identify them in different literary works. In these years, our academic writing help experts have come across a wide range of such elements and thus, created this list for you.

Take any Gothic novel, and it is not possible that you won’t find any woman suffering due to a villian in them. Different emotions including sadness, loneliness, and oppression are portrayed through this character. Also, pathos is generated in the mind of the readers when we see the condition of the women. She is either rendered powerless, bonded in a castle or attacked by a nobleman.

A Gothic novel that is captivating will definitely have elements of mystery and fear in them. Unlike the instances that can be justified by Science, Gothic literature contains scenes like evil potions, flickering candles, and burials that do not come in the domain of science.

One of the most important Elements of gothic literature is the flawed protagonist. Not just males, even there are female characters who have been depicted as being driven by their passion. For instance, the example of Cathy and Healthcliff from a famous novel by Emily Bronte- ‘Wuthering Heights’.

One of the most popular literary devices that is used in Gothic literature is ‘Foreshadowing’. It is used to announce curses, visions, and omens in the entire novel. It has been seen that every tragedy is preceded by bad luck.

In many of the Gothic novels, characters are portrayed having nightmares to signal that something bad is going to happen in the future. A character known as Mike Noonan from ‘Bag of Bones’ saw a nightmare of his wife’s death.

One of the most common Elements of gothic literature is the fearful and scary atmosphere. This is the reason you will find most of the settings of such plays and novels to be dark forests, threatening storms, ominous weather, etc.

For example- In ‘Frankenstein’, Mary Shelley employed the character of a grotesque monster to enhance the eerie atmosphere in the novel.

A high dose of “melodramatic scenes' ' are imbibed in every Gothic novel. You can easily find instances wherein the authors have used exaggerated and impassioned tone to put forth the terror in the minds of the characters. A great example of this would be “The Yellow Wallpaper” that effectively conveys the after effects of postpartum depression faced by a woman.

Villains play a pivotal role in developing the plot of the Gothic novels. In a majority of the Gothic plays and novels, the villains are in the form of autocratic kings, or priests who assert their superiority over others. There won’t be any such Gothic plot that does not have villainous characters in them.

In many of the Gothic novels, we see how romance turns into tragedy. So, in a way, we can say that the Elements of gothic literature stems from romance.

When you come across these elements, then you can easily identify them as Gothic Literature. Hopefully, you have got an idea of what elements drive these novels. If you still have any doubts in these assignments, then you can simply have a chat with our academic writing help experts via our interactive live sessions 24*7.

Hand Us Over All Your Queries, While We Provide You With The Best Academic Writing Help In Australia

When you get in touch with our academic writing help experts for your work, these are some of the perks that we provide you with.

Fill the order form now and we will get back to you within a few moments with all the answers that you have been looking for.

How to Write a Reaction Paper?