How to Outline - Promissory Estoppel Intention to Contract

A promissory Estoppel is a judicial instrument used in the commonwealth legal system where the courts may possess the powers to prevent or deter a person from going back on his or her word. The basic objective of the doctrine of promissory estoppel is that it protects the interests and rights of a party that is relying on the promise of another party. In contracts and business dealings, promises have great value. Promissory estoppel is a judicial device used to secure the performance of a promise. The doctrine makes sure that the promising party is not allowed to go back on its promise. There are penal provisions available for the non-performance of duties and obligations arising out of a promise. Therefore, Promissory estoppel is an important aspect of the commonwealth contract law. 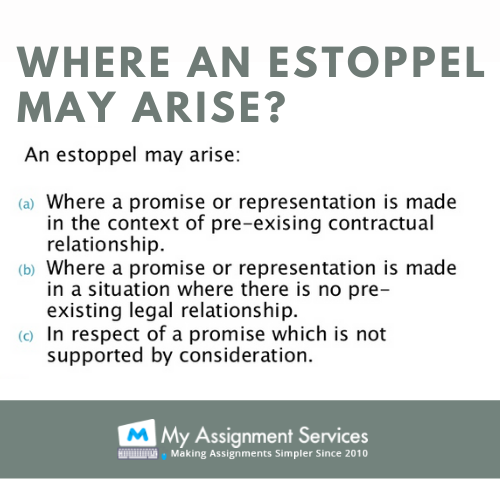 In the case of a tenant-landlord relationship, promissory estoppel is often invoked. Imagine a situation in which a landlord had promised the tenant that he would not terminate the lease of the property rented out to the tenant. Due to this promise, the tenant performed expensive improvements on the property. Thus as per the doctrine of Promissory Estoppel, the landlord will not be allowed to go back on his promise. This is valid even if the promise made by the landlord is not legally provided for in the form of a written contract. 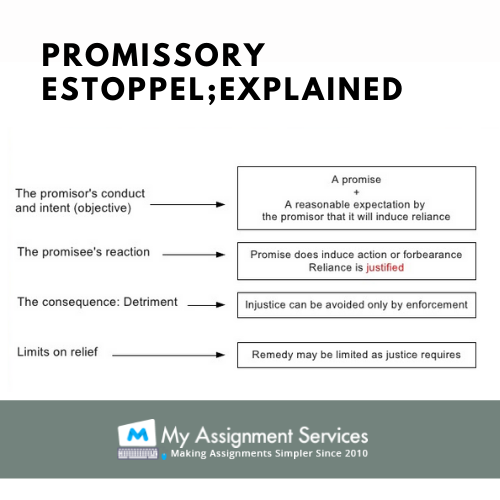 The Difference Between Promissory Estoppel and Doctrine of Waiver

Here are the essential elements for a case to qualify for the implementation of the doctrine of Promissory Estoppel:

To summarize the points mentioned above in simple language, the victim needs to establish the following:

For the reasons mentioned above, the doctrine of promissory estoppel is also often called the rule of evidence. It is called so because in the doctrine of promissory estoppel a party or individual is barred from leading the evidence of a fact which had already been concluded. Certain estoppels relate to deterring a party from leading the evidence related to a pre-established fact.

Type of Estoppels under Intent to Contract

Under the gambit of intent to contract, there are several different kinds of Estoppels:

Estoppel by the record: This type of estoppel bars the parties from relitigating the same issues that have arisen in a previous cause of action.

Estoppel by deed: Situations where rules of evidence prevent a litigant from denying the truth of what was said or done.

Complete confidentiality: You can rest assured that My Assignment Services will never reveal your identity or personal details to any other party.

Easy refunds: When you entrust your assignment to the experts at My Assignment Services, you are assured that you can avail of easy refunds in case you fail to secure a qualifying grade.

Free Turnitin reports: My Assignment Services provides you with complete law assignment help from start to finish. You also get a free Turnitin plag-check report to corroborate the promise of zero plagiarism.

Benefits and Risks of Using Social Media in Contemporary Healthcare