As Albert Einstein once stated, In the middle of difficulty lies opportunity; no truer words were ever spoken. These words are taking shape in the form of a new vaccine for curing a disease that we had no idea about in the last decade. The world witnessed how a measly virus can pose a threat to the entire human population.

It spreads exponentially, and for the exact reason that the World Health Organisation declared it a pandemic in March of 2020. Communicable diseases are nothing new; we've witnessed them time and time again throughout history. Call it survival instinct or an evolutionary edge, we humans have always overcome such limitations.

Sickness with a contagious disease placed roughly 400k people in hospitals in 2015-16. - Department of Health, Australia

However, there also exist anti-vaxxers that pose a threat of the same intensity as the coronavirus. If you aren’t familiar with the term, it is just a term used to describe people who do not abide by the safety regulations and control measures. In short, they are against getting a vaccine.

In this blog, we’ll discuss the same, not the anti-vaxxers but the risk factors of transmission of diseases and discuss some communicable diseases examples. 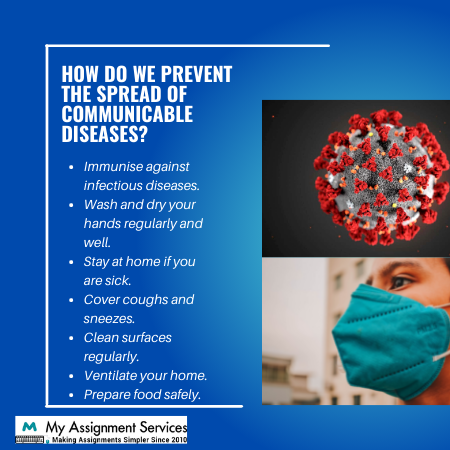 What are the Risk Factors for Communicable Diseases?

Communicable diseases spread directly by coming in contact with a sick person or through indirect mediums - water droplets in the air or an unintentional change of body fluids. People often get infected without even realising the transmission medium; we witnessed many such cases during the Covid-19 breakout. Behavioural risks are the major cause of transmission of disease-causing microbes. Here are a few examples:

Places with more crowded residency or public locations that attract a large number of people every day are at most risk of such transmission. Such locations are more prone to disease spread as there’s less scope for distancing and crowd control.

Many communities or a large population are forced to leave their homes due to various factors like natural disasters, fire, or war. Such communities are more [prone to a disease breakout. Bad shelter and poor nutrition increase the chances of diseases spreading, and often the lack of healthcare worsens the conditions.

Areas with bad sanitation and hygiene practices are yet another reason for elevating the chances of disease spread among communities. We witnessed this, especially during the covid crisis. Even keeping your hands clean saves you and many other lives.

Next, the communities or areas lacking healthcare facilities are most vulnerable to disease prevalence and communicable disease breakout. Being disconnected from the urban cities, especially the aboriginal communities, takes the heat of such shortcomings from the authorities.

When the covid emergency was announced across the world, the rule of the thumb was to wear masks and clean our hands. It was indeed effective in controlling the spread of, still intervention from the authorities entailed. The behavioural risks of disease transmission are why the government imposes fines on defiance.

HIV/AIDS, Acute respiratory infections, diarrhoea, tuberculosis, and malaria are the five most common transmissible diseases globally, accounting for approximately eighty per cent of the total communicable diseases burden with a death toll of 12 million people each year, mostly in developing nations. - WHO (World Health Organisation)

Human mobility and movement are often the major reasons for disease transmission, but control measures can help stop the spread. Be it SARS (Severe acute respiratory syndrome) or a more intense plague, following the safety measures is the only effective way to heal oneself and society. This is how we've overcome the past pandemics.

Keep learning and gain experience as it will help you become more profound in your professional field and help you abundantly as you transition into the roles. The ones currently working toward their dream can get Nursing Assignment Help at the My Assignment Services website. It's easy and quick; just fill out a form to enrol today to avail expert help.

What are Some Examples of Communicable Diseases?

The millennials might think that the world going through a pandemic is the first the world has witnessed. Although their intensity spread was much greater than experienced before, there have been several such incidents in the past. Some examples of communicable diseases are:

First and foremost, on the list is the Covid-19 breakout in 2020. This was the worse disease transmission that the world had ever witnessed. With a death toll of 6.2 million, it proved to be the worse pandemic to date. But it all took some vaccines and prevention measures to slow down the spread.

HIV spread greatly affected the world, infecting over twenty-one million people globally. The first-ever case was found in the Democratic Republic of Congo, and currently, over thirty-five million people live with the illness. Communicable disease awareness and prevention measures helped control the spread as there is still no cure for AIDS.

The cause of this global emergency was category 2 influenza. It was caused by an H3N2 influenza virus and resulted in a million deaths globally. Just seventeen days after the first reported case in Hong Kong, it spread across the world, and the only relief was influenza vaccines and prevention measures.

Flu viruses are difficult to eradicate due to their huge quiet cache in aquatic birds. The human population will tend to be infected with zoonotic influenza. - WHO (World Health Organisation)

These are the top three pandemics that have ever prevailed in the global population. But following the prevention measure is the key to stopping the spread and keeping the transmission at bay. Human intelligence and zeal have always upped such adversities. But, doing so isn't always easy as such transmissible diseases have huge consequences. 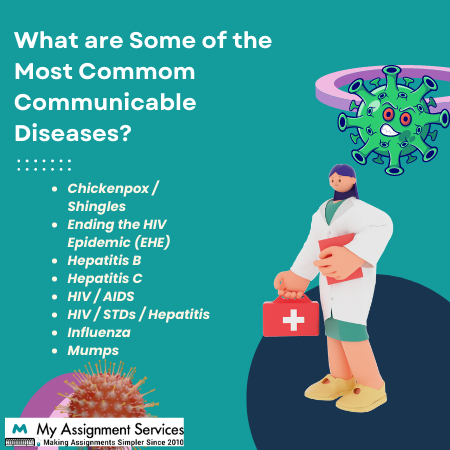 What are some Examples of Communicable Diseases' Effects on the Community?

The recent corona crises have been the most difficult and consequential. We all witnessed the rising death toll and exponential spread; it did not only affect us as individuals but the whole society. Over ten million people are on the verge of extreme poverty due to their livelihoods being disrupted.

More than half of the world's workforce faces the risk of losing their jobs, and the confinements result in severe existential crises. Millions of daily-waged employees and farm workers faced poor health and a lack of labour safety. All this washed them to extreme poverty, and the consequences are still prevailing.

Food insecurity and increasing mental distress are other huge issues that were highlighted due to such diseases. Communicable diseases wreak havoc in society, and the after-effects can be witnessed for years to come. Hence, we can only abide by prevention measures as "prevention is better than cure".

Put on a mask, wash your hands, keep a distance, and also get vaccinated; read the public health advisory released by WHO for preventing the spread of coronavirus.

As a nursing student, you will be responsible for submitting case reports, reflection essays, clinical lab reports, and other such assignments. Researching can be challenging as you may fail to find good academic resources. Fill out the enrollment form to get free academic resources and affordable nursing assignment help.

Issues in the Digital and Telecommunication Industry