What Is the Impact of Wearable Technology in The Healthcare Industry?

As people have started keeping their cellphones in their pockets, wristwatches have become old-fashioned, but with the incorporation of new-age technology into smart wearables. Wristwatches once again become popular but for wearing smartwatches. When talking about the capabilities of such gadgets, reading time is only the tip of the iceberg, as it offers several health benefits.

Patients carrying gadgets with access to their health information and therapy is not a novel notion. Diabetes monitors are worn by patients suffering from the condition. Instead of a gadget that is difficult to move and has to be linked, wearable technology in healthcare like defibrillators and pacemakers provides a personal attachment with users.

In the previous four years, the popularity of wearable tech has quadrupled. Over 80 percent of customers are eager to wear health trackers. Business Insider

With the introduction of wrist-worn advanced technologies, healthcare practitioners can engage with patients to collect data for their diagnosis while also assisting them in forming good living habits. But have you wondered why these devices are so powerful? And all the benefits it offers? Read forth to know more. 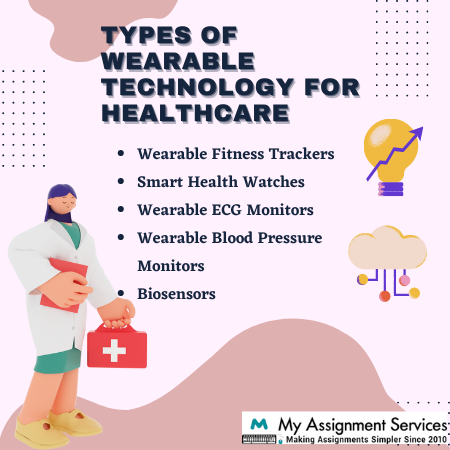 What Are the Examples of Wearable Technology in Healthcare?

Smart wearable usage has grown far faster than anticipated, leading to a huge market. Insurance companies and businesses are now searching for ways to use health monitoring technologies to help their staff and consumers. Such devices come in various shapes and utility scopes; a few of such devices are:

Wearable fitness trackers are the most basic and classic kind of wearable tech. Such bracelets have sensors that enable users to monitor their regular exercise and heart rate. Smart trackers link with various smartphone applications to give users fitness and health recommendations.

Did you know that over one billion people use smart wearables worldwide and on a daily basis?

People often use smartwatches to perform the same tasks as their smartphones regularly. We may display activities like reading stuff, sending texts, and making calls are some of the daily tasks. Along with the basics, a fitness tracker and an exercise monitor are available in such watches.

The ability to track the electrocardiograms, or ECGs, separates these gadgets from smartphones. Such portable ECGs can take the ECG readings and communicate the information to the user's physician. It also can identify atrial fibrillation. It can also automatically track speed, altitude, jogging, sprinting, swimming, and biking.

Though this gadget resembles a traditional smartwatch, still, it functions differently due to an inbuilt oscillometric blood pressure monitor. Such wearable technology in healthcare can record over hundred blood pressure reports throughout the day. Users may send this data to their phones which is further linked to an app that the doctors can access to monitor the patient's blood pressure.

A biosensor has more clinical use than the previous devices on the list. Biosensors are especially useful for individuals suffering from a health condition. It is a gadget that enables people to roam around while gathering information on their heart rate, respiration rate, and temperature. Medical professionals can directly track the patient’s vitals through such devices.

There are several benefits of such devices, and the demand is increasing by the day. Despite the huge competition and widespread availability of such smart gadgets, their popularity isn’t going anywhere anytime soon. The prices of these smart wearable devices have become affordable as it has made healthcare accessible to everyone.

Nursing students are also required to prepare case studies of the various cases they observe and read about. Case studies cost a higher grade as they are to be submitted in a proper format with all the procedures, medications, cure and final observation. Get nursing assignment help at affordable prices; just fill out the form.

What Are the Benefits of Wearable Technology In Healthcare?

Smart wearable technology has become very common, from telling the time to measuring a person's vitals. As much as it has become a popular fashion item, it also has several benefits for the wearer. Some of the benefits of these devices are:

As reported by Salesforce, over 79 percent of businesses have invested or adapted to wearable technology as it is in high demand in the market and entails future success.

Such devices offer versatility. They are built to carry out tasks typically completed using a smartphone—checking, text, controlling music, etc. An added feature of health-tracking in such devices has made them very useful for healthcare. It provides users with a one-stop solution for many of their daily functions.

With the increasing demand for remote healthcare and personalized diagnoses, plans have overshadowed traditional in-patient care facilities. In-patient care is still reading useful and necessary, yet such devices have reduced the cost of healthcare by tracking the patient's health which would have cost a check-up session.

Such Wearable technology in health care can monitor and track the user's data in real-time with a sheer depth and offer insight into a patient's vitals, further providing doctors with the chance to track a disease early. In most cases, the diagnostics using such devices are accurate and have helped save patients' lives.

When doctors can track accurate diagnoses at an early stage, patients can receive the best and most personalized treatment, resulting in better patient outcomes. Such can be achieved via remote healthcare, and it also reduces the burden on healthcare professionals. 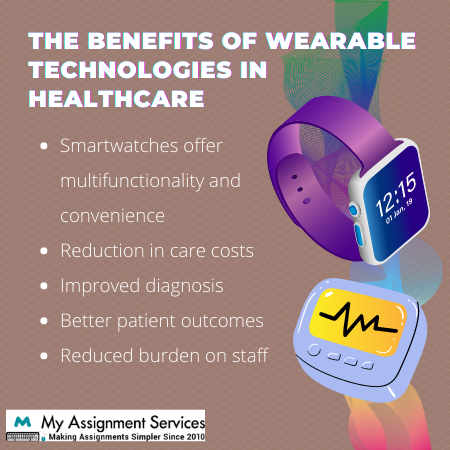 Why are Wearables So Powerful?

The popularity of industrial smart wearables for places like storage, factories and distribution facilities is increasing rapidly, and it's predicted to become an industry of 2.78 billion USD in 2024 - SalesForce

Portable technology can significantly alter our society today by allowing us to be watched through a specialized system. Wearable devices have gone from being non-existent to achieving a booming demand worldwide. The future of such devices aims to seamlessly integrate into people's everyday lives and be a useful part of everyday life due to this unexpected rise in popularity.

Nursing students must submit various research papers, case studies, lab reflections, essays and other assignments. So many writing and reading assignments can get overwhelming; if you seek Nursing assignment help, you may fill out the enrolment form. Get live guided sessions and free academic resources for your assignments.

What Are the Key Concepts of the Unit: ECON802 Economics and Global Trade?

What is the Difference Between Plant and Animal Cells?