What Is the Importance of Pharmacology Skills in Surgical Nursing?

Pharmacology is a field of medicine concerned with the study of various drugs and their effects on the human body. It includes developing new drugs and studying the effects of already developed medicinal compounds. This field involves various toxicology elements, biology, physiology, and chemistry. It is a widely studied and practised field and applies to many scientific fields and careers.

If you think it is related to the pharmacy? Pharmacy is geared toward equipping individuals with a licence to dispense prescribed drugs/medication to patients. On the other hand, Pharmacology focuses on teaching students the research-based approach to developing medicinal drugs. Students learn to analyse the chemical effect of various compounds and various methods for creating medicines for physical and mental illnesses that are effective for humans and animals. 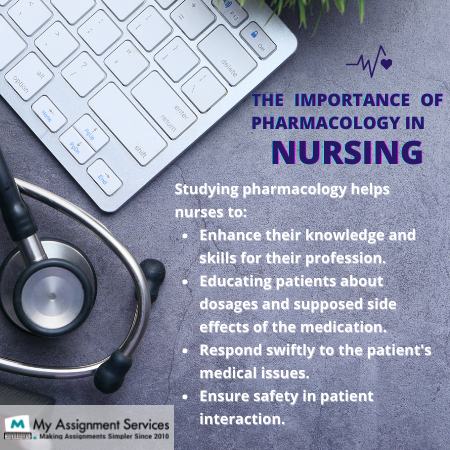 What Are the Important Concepts Of Pharmacology In Nursing Studies?

The word Pharmacology is derived from the Greek word pharmakon + logos which means 'the study of drugs to do good.' Clearly, it is a field that is concerned with healing; all medical professionals are focused on the patient's well being, but a pharmacologist is like ancient healers that developed medicines from naturally occurring substances

Well, drugs aren't very natural anymore and studying countless books and possessing extensive chemistry knowledge comes in handy when developing medicines. Regardless of the type of medication, a few general principles are important for pharmacologists to follow. The four basic theories that the field generally abides by are:

The drug receptors in your body may be specialised proteins, enzymes, or nucleic acids. A drug-receptor functions as the target molecule that binds the drug to initiate its pharmacological effects. The drug-receptor complex triggers the biological response of the body to heal the illness. The intensity of the response to the drug is directly proportional to the amount of drug-receptor complexes formed.

Drugs consumed orally are absorbed in the gastrointestinal tract. Later, the blood infused with pharmacological drugs moves from the GI tract into the liver. The drugs get metabolised only after moving to the liver from the GI tract to the body. This effect of liver metabolism is called the first-pass effect. Drugs cross membranes by passive diffusion or active transport.

Did you know Narcotics drugs must not be used for treating patients with head trauma?

The efficiency or the effectiveness of a drug is called pharmacokinetics. The breakdown of the drug in the body and its effect over some time, the absorption, and the distribution in the body, its prevalence in the tissues, and excretion.

The aim of drug metabolism is to form compounds that are charged and can be eliminated through the kidney. Soluble agents are broken down in the liver by biochemical reactions known as phase I and phase II. The removal of drugs from the body is called Renal elimination.

Nursing students have to submit various research papers, case studies, lab reflections, essays and other assignments. So many writing and reading assignments can get overwhelming; if you seek nursing assignment help, you may fill out the enrollment form. Get live guided sessions and free academic resources for your assignments.

What Are the Different Types of Pharmacology?

Now we are aware of the basic functioning and how drugs take effect in the human body. We will move forth to the different types of pharmacology. Yes, there are various sub-division in this field as well; it is not just mixing components but studying the effects each compound may have on the patient. The different components, development phases, effects on the body, and if the drug is poisonous entail different study stages. The five important forms of pharmacology are used for the development of drugs are -

Antidote is a greek word that means "give against", which means an antidote for a certain condition is given 'against' the problem causing agent.

This branch of pharmacology is important for nurses and other healthcare professionals to study the movement of drugs in the body.

The effects of drugs and the action mechanism are studied under this specialisation.

Studying all therapeutic drugs and their uses is beneficial for calculating the adverse effects of newly formulated drugs.

The detection, nature, and effects of poisonous drugs are studied in this field.

These are the five major sub-branches in pharmacology, and they are useful for the development, production, and safe usage of drugs. Be it a pain relieving pill or the Covid vaccine taking effect in your blood (only if you got vaccinated in the first place) is developed by a team of pharmacologists. 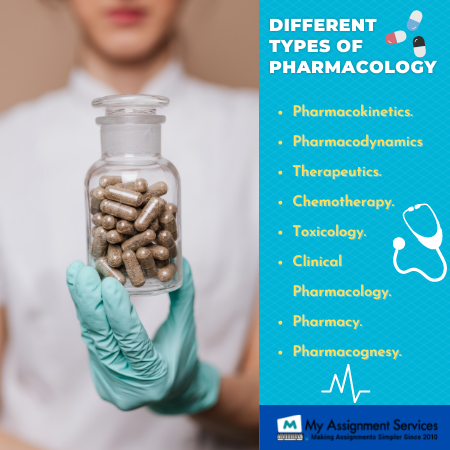 What Is the Importance Of Pharmacology In Nursing?

Nurses are tasked to monitor the intake and dosage of each patient in a ward or any other clinical setting. It is necessary for them to possess knowledge of the effects - good and bad - on the body. Their knowledge can help the patient get better and avoid any adverse reaction to some drug. Here reasons why pharmacology is important for nurses, are:

Studying pharmacology can help enhance a nurses’ ability to monitor the patient’s medication level and help deliver better care for the patients.

A nurse's knowledge of pharmacology is essential for educating the patients about dosages and supposed side effects of the medication.

The importance of pharmacology courses in nursing education may result in confident nurses, educated patients and more safety in patient interactions.

Tip: Antacids must not be taken with food as it delays the stomach's acid reflux, which may entail indigestion.

Newly developed drugs entail different effects on the thousands and millions of people in a population. The expected pharmacokinetics of the covid vaccination is, of course, good for people, but the adverse effects can be dangerous - short prevalent to life-threatening effects. Nursing or healthcare professional with knowledge of pharmacology is important for nurses in such circumstances.

Nursing is a field that requires theoretical and practical knowledge, and you may learn all the practical skills through practising as a nurse. Still, the theoretical skill demands various assignments be finished and delivered. You may face issues when working on your assignments due to a lack of adequate resources material; fill out the enrollment form to get nursing assignment help and contact our experts today.

The Importance of Cultural Education in Clinical Settings

How Does Reflective Journal Writing Help the Students Learn?