Health and land rights are universal, indivisible and inalienable. This applies to everyone -- including the Aboriginal people. Almost 20 years after a discussion over the rights of indigenous peoples took place, the UN adopted the International Declaration on 13th September 2007.

The UNDRIP outlines the special rights of over 370 million Indigenous people in the world. It includes their rights to preserve the lands given by their ancestors and speak and teach native languages.

But you would be surprised to know that Australia was one of the four nations who voted against the adoption of the Declaration. The other three countries, Canada, the United States, and New Zealand eventually endorsed it a few months later. The Australian Government signed it in 2009. Despite this, the first peoples continue to face dispossession, racism, and other human rights violations. In this blog, we discuss their health and land rights status and the challenges associated to them.

Health Status as Compared to the Non-Indigenous

The Indigenous population across Australia faces a significantly more enormous burden of diseases, which also results in a lower life expectancy. Combined with many more factors, the community is entrenched in a health crisis that exists for countless decades.

Statistical data reveals that the life expectancy gap is 10 and 9.4 years for males and females, respectively. Moreover, the burden of diseases is quite disproportionate at 2.3 times over non-Indigenous peoples. The community remains five times more vulnerable to diabetes and cardiovascular diseases.

As they age, their chances of becoming sick and dying early increase primarly due to mental illness, smoke-related cancers and heart diseases. Health disadvantage is spread across the social indicators such as income, employment, and housing. Most Aboriginal communities have the lowest average incomes, overcrowded households, and highest rate of unemployment. The ones who remain jobless for an extended period of time suffer from abuse and violence. Suicide risk is high in such cases.

The Aboriginals have continued to face high levels of discrimination that is linked to their colonisation and the indicators discussed above. More commonly, they are subjected to dispossession of their land rights, territories and resources. Until the Australian Constitution signed declaration rights for them in early 2000s, they were forced into laws, compromised and even neglected of their culture.

To realise Aboriginal’s rights to their territories and resources, nations have made various amendments. Here’s a look at a few of them: 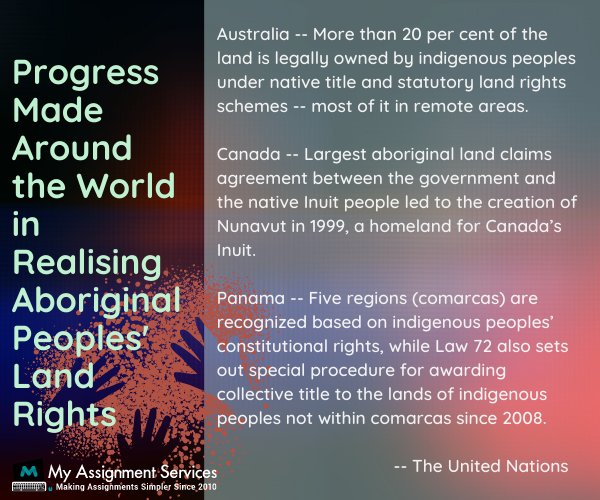 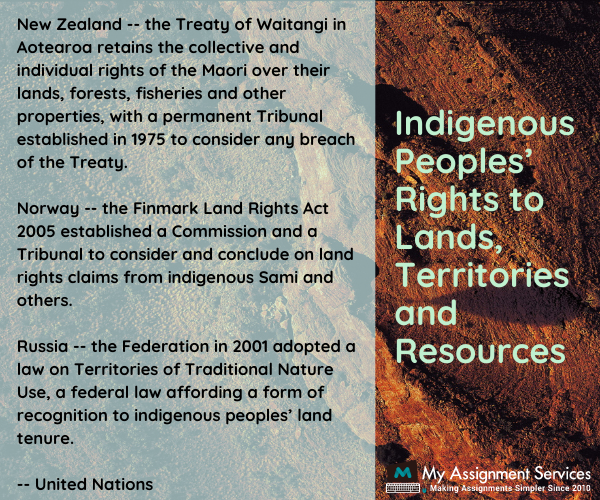 1950s and 1960s witnessed several Indigenous social movements in which the Aboriginal people fought fiercly for their rights and sovereignty. As from the begining, they have deep spiritual connections with their territories and resources -- both of which represent their identity and existence.

It is evident that empowering them with the human rights contributes to their social, mental and physical well-being. In addition to this, it helps tackles the loss of biodiversity since the Indigenous lands contain 80 percent of world diversity. It is clear that they are the best people to look after the environment.

Many countries yet today still do not recognise the necessary procedures and importance of Aboriginal land and resource rights. The United Nations reveal that despite of obtaining the rights to their land and resources, they face a lack of enforcement laws. In fact, the contradictory nature of the existing laws results in a de facto denial of their basic land rights. At times when state and businesses undertake civil projects, such as plantations, mining, dams, and highways, there is no proper consultation or consent taken from the Aboriginals -- afterall, it is their lands we are using.