Mole day is one of those rare annual events where humour and Chemistry strike a happy pose together. Don’t believe it? Try searching the internet for the ‘Mole Number Humour’. The mystery that why Mole Day is celebrated from 6:02 AM – 6:02PM on 23rd day of 10 month every year, lies in the Mole Number itself?

Mole Day is celebrated from

This is Chemistry at its cleverest. 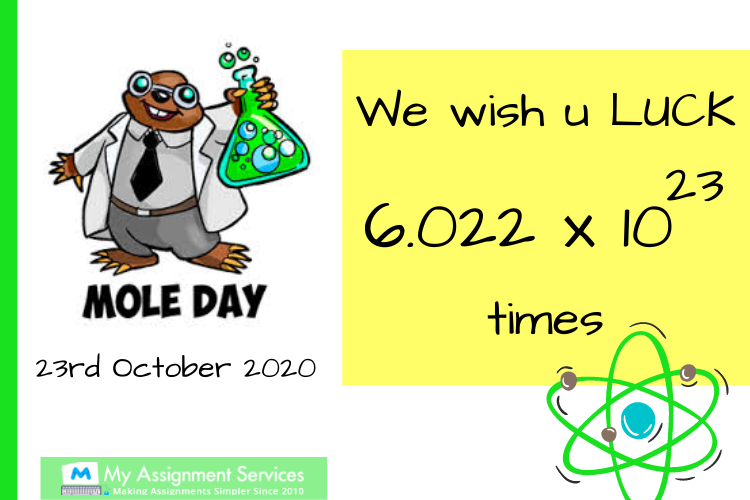 The reason why internet humour on Mole or Avogadro number is abundant is because of the sheer genius of the Amadeo Avogadro; a pioneer and one of the celebrated founding fathers of the discipline. Avogodro is better known in scientific circles for the ‘Avagodro’s Law’ but to masses in general and chemistry scholars in particular, his most famous work is the Mole Number which is a unit to represent extremely large quantities of super micro particles such as ions, atoms and molecules.

When was the 1st Mole Day Celebrated?

The idea originated from a positive obsession of one single high school chemistry teacher, Maurice Oehler. Inspired from a Science magazine article, Maurice started observing this day and regularly arranged fun chemistry themed events with her students. Finally on 23rd October 1991 a statutory body called National Mole Day Foundation was created with widespread media alerts and PR coverage and the tradition of observing Mole Day in honour of one of the greatest scientific talent i.e Amadeo Avogodro.

Within a year NMDF was converted into a non-profit body headquartered in Wisconsin and governed by a board of directors.

Mole Days are associated with quirky themes that scholars look forward to each year. It is the humor and the pun associated with the Mole Number which keeps the concept trendy in the online domain.

The very first theme in 1991 was “Mole the Merrier” and another popular theme was the “MOLEvengers” in 2017 to signify the Avengers Franchise.

The theme for 2020 Mole Day is uniquely punny: ‘DispicaMole Me’ 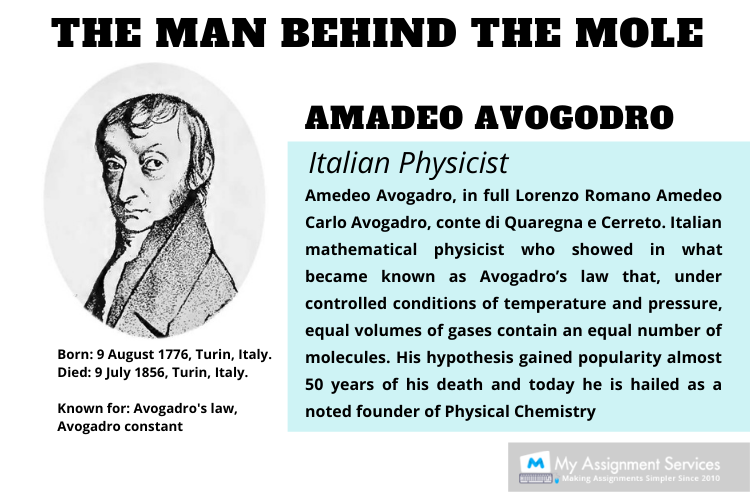 What is a Mole Number?

1 mole or Mol of any matter equals to 6.02214076 x 1023 units of that material measured in units of atoms and molecules, even electrons depending on the physical nature and natural existence of that matter.

A mole or Avogodro number represents the molar mass of the molecule. In simple terms it is way of measuring the weight of the molecules in any given form of matter and Amadeo was the first one to apply this perspective at molecular level.

1 Mole is an astronomically huge number and attaches a curious case. Here’s why?

This is less than 1 mole of sand.

On the contrary a drop of water is about .8 moles meaning that you drink more than 1 more of water every day.

The significance of the Avogodro Constant or the mole number

Study of the Nano-particles has moved leaped and bounds since the introduction of Avogodro’s number or rather its acceptance. It is physically impossible to measure molecules or determine the Molarity of any substance but The Molar Number is a near accurate hypothesis to achieve that.

Avogardo number is derived through various scientific methods such as electo-chemistry and xray-diffraction and to date remains the most viable method to study nanoparticles in chemical substances also a very popular topic for chemistry in science assignments given by professors.

It is ironic though that Avogordo’s Law and his hypothesis took more than 5 decades after his death to be widely accepted by the scientific community.

When Avagordo highlighted the difference between atoms and molecules; he was the first one to publish a comprehensive paper on the topic but the then famous chemist, Dalton discarded his theory claiming that similar atoms cannot co-exist.

However by 1860, almost 50 years after of Avogordo’s hypothesis being developed, enough scientific evidence was collated on atomic weights and the discrepancies that were arising by practicing the accepted norms and theories. From some of the experiments that validated the original hypothesis, most notable were Kinetic Molecular Theory by Loschmidt and Perrin’s work on the Brownian motion in 1909. Although these were just researches that proved successful due to Avogordo’s number, the concept was widely accepted by 1850.

The Mole day is also termed as Fun Educational Holiday.

Chemistry teachers from around the world have strived to create awareness about molecular-science on the Mole Day.

How? By making it fun.

Giving cookery assignments where ingredient quantities need to be converted into moles and creating snap video games where you are required to shoot elements with higher molar number first; Avogordo has single handedly revolutionized the study of Physical Chemistry; if not less than at least equal to 6.022 x 10 23 times.

Here’s a fun activity for you on this Molar Day. Try searching Google for what you will be able to buy with a Mole of Pennies.