World Rose Day (Welfare of the Cancer Patients) is commemorated each year on 22nd September to keep the undying zest and legacy of Melinda Rose alive. Diagnosed with a rare and primitive form of cancer; Askin’s Tumor, Melinda from Canada was expected to survive only a couple of weeks as declared by her capable doctors but she went on to live up to 6 months shattering all odds. She used her short time to spread cheer and happiness among cancer patients. By sending touching emails, flowers and notes; she connected with cancer patients wherever she could and her biggest message was hope with a sincere intent to change the way the world sees Cancer Patients.

If you believe that that one person can change the world, then there is nothing more inspiring than the story of 12-year-old Melinda Rose from Canada. World Cancer Rose Day is celebrated in her memory and for her unwavering positivity. 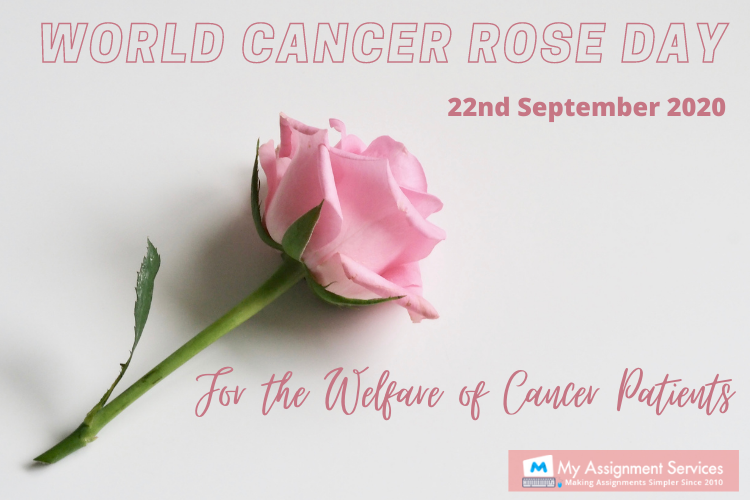 In medical terms, some medical professionals often use the term “cured” if they are confident that cancer won’t return for five years. The unfortunate fact is that even after prolonged sessions of chemotherapy and clinical medications, cancer tumours are bound to return after 5 years. Thus a permanent cure for cancer is still a medical fallacy.

Types of cancers such as lymphoma or Leukemia may be treated with success through Chemotherapy no matter at what stage they are detected; however, most successful treatments are recorded when the cancer is detected in early stages. In absence of a proven cure; if doctors can discard cancer cells for five years; they term the treatments as a success.

Cancer types such as thyroid, Hodgkin Lymphoma, Cervical, Melanoma or Skin Cancer and Breast Cancer can be treated with a very high success rate if detected timely. Although due to the acute multiplication capacity of cancer cells, the infection spreads to other parts of the body if not controlled at early stages. Almost every form of cancer is fatal in humans.

Cancer cases are spiking amongst the indigenous population of Australia.

Cancer causes more deaths in aborigines than circulatory diseases such as heart and blood pressure-related maladies. The updated findings of Australian Bureau of Statistical Data collected from the Victoria region reflect that between 2014 and 2018; Cancer has taken lead from all other circulatory illnesses in terms of fatality among the indigenous population.

The death toll caused by cancer during 2014 -18; at 218 per year was higher than caused by circulatory disease; for which the figure was placed at 185 deaths during the same time. (Data derived from the NSW Cancer Institute Report 2020)

One of the most alarming findings of the NSW Cancer Institute report was that since 2010, the prevalence of cancer has risen 68% among the aborigines. Some experts, however, attribute this rise to better reporting of cases and due to the increased effectiveness of Aboriginal Medical Services. They argue that earlier the cases were not recorded formally.

Why the World needs a Rose Day to combat Cancer?

The Welfare of the Cancer Patient’s Day is celebrated to fight the stigma around the disease.

Most cancers if diagnosed early are curable. Cancer is not communicable, you will not catch it if you hug a cancer patient. Visiting a cancer patient or being the support system for his nears and dears is safe for you.

These facts and many more like this need to be spread around. As friends and well-wishers of people suffering from cancer, it becomes our moral obligation to introduce happiness in their lives and give them eternal hope. Hope and happiness alone go a long way in sustaining the treatments for cancer and in ensuring successful results. The case of Melinda Rose is a testimony to that.

International Agency for Research on Cancer (IARC) Report 2019 stated that 20% of men and a little less than 20% of women will develop some form of cancer in their lifetimes. These figures are particularly higher in advanced urban settings due to lifestyle-related eating disorders and excessive consumtion of alcohol and tobacco.

In the absence of the cure, prevention is all we have. Through active participation in the welfare of the cancer patients, we alsogather awareness needed to curb the spread of cancer to some extent. The media focus on the mighty disease has done wonders in changing the public perception and in the destigmatization of the chronic condition. International Cancer Day is an important event to spread the message of positivity and for the public, in general, to come ahead and infuse hope with tenderness amongst the cancer patients.

How can you celebrate the International Rose day?

World cancer Rose Day is a reminder to each one of us to contribute towards the welfare of cancer patients around us with jolly and uplift their moods by sending them flowers, notes with words of endearments and being supportive of their family members. They too are battling in this case.

Amid the Corona Pandemic, ample digital events are taking place to remotely connect with cancer patients and brighten them up with constructive social interactions.

You can also pitch in by donating towards the cause. Many cancer welfare societies are doing their bit with utmost sincerity and your donations whether in cash or kind will also legitimize their efforts.

The essence of Cancer Rose Day is to replicate the carefree love for life that Melinda Rose taught us. It is a positive energy that she gathered by connecting with fellow patients for spreading happiness and hope. Take this day as an opportunity to cheer up at least one cancer patient by sending them a rose or a happy note. Try surprising a cancer patient that you know with serendipity in from of a friendly visit or kind note. The smiles you will cause will be undoubtedly worth a million dollars.

The rising need for uniformity in global intellectual property law