Narrative Conventions and Its Importance

What are narrative conventions? What is their importance? Along with you, there are thousands of students looking for answers to these questions.

Narrative conventions are a set of assumptions and guidelines that people use to understand what they view as narrative. Narrative can be defined as an account or description of related events or a story. It is important to remember the difference between narrative and fiction because narrative conventions assume that the content presented to an audience is truthful even though it may not necessarily be true in reality.

We all understand narratives when we hear them because the conventions of narrative make it possible to do so. These conventions allow us to construct a story based on our interpretation and provide us with an internal consistency that makes the story believable and realistic or fantastic for works such as science fiction or fantasy. The order in which a story is presented, the characters present, and the plotline of a story all adhere to narrative conventions.

Narrative conventions include establishing a setting, providing an introduction to characters, telling what happens next by using exposition or dialogues between characters, and having antagonistic forces challenge the protagonist. These conventions help us interpret what we are viewing. For example, when watching a film or television show, narrative conventions allow us to identify who the protagonist is and what they want to connect with them to follow along with their journey. 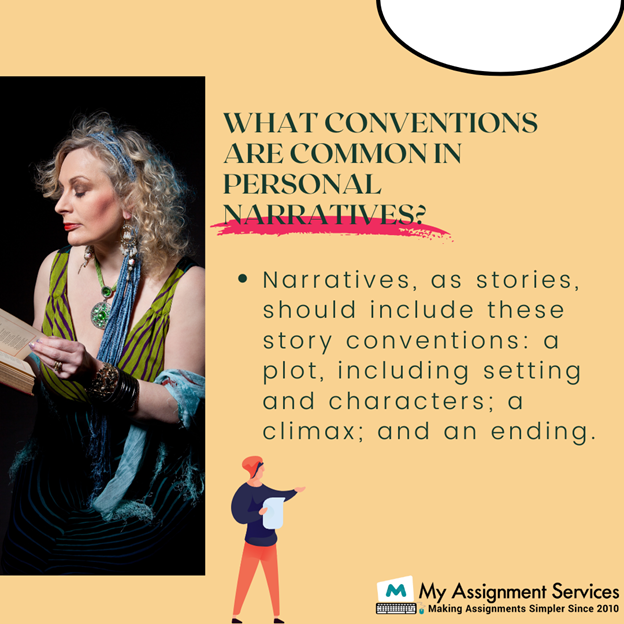 What Are Different Types of Narrative Conventions?

There are a number of different types of narrative conventions that you can use in your writing. Some examples would be the omniscient perspective, where the narrator knows everything about all characters and events in a story; limited third-person perspective, which is when narration is from one character's point of view only, such as when reading a novel told with a first-person narrator; and third-person omniscient, in which multiple narrators are telling the story from different angles. Narrative conventions can also be broken into realistic or fantastic categories to separate them between works with real-world rules versus fantasy ones.

There are three types of narratives: episodic, linear, and cyclical.

Episodic narratives are frequently used in short stories because each event is independent of the last. There is no connection between all events within the story in an episodic narrative that make it whole. The protagonist does not undergo a character arc or change in values or beliefs.

A linear narrative is one that tells a story in sequential order. The events are related to the protagonist's journey, who changes internally over time as they have experiences that have consequences. Because of this, their values or beliefs will change at some point. For example, in Star Wars Episode IV: A New Hope, Luke Skywalker is an idealistic farm boy that sees the evil that Darth Vader is capable of, who starts to realize that he will have to fight him in order to win.

Cyclical narratives are similar to linear ones because there are events ordered in a sequential manner. They are also internally consistent, meaning each event supports another one or makes reference to it. The difference is that cyclical narratives also show the events as part of a larger pattern, meaning references to past events and how they relate to present ones. In this kind of narrative, there is no central character or journey; instead, multiple characters may undergo different storylines that all lead back to the same event at its end. For example, numerous characters are affected by the One Ring throughout their journeys in The Lord of the Rings.

It's important to note that these are only guidelines for narrative conventions. Authors can create narratives based on all three or mix and match elements from each one if they choose to do so. It all depends on your purpose as a writer.

Narrative conventions are what make a story readable to its intended audience. They allow the writer to convey their message and connect with readers, regardless of what genre they're writing in or how many characters they have. Without using certain narrative conventions, it might be difficult for people to follow along with a story. For example, when something is being told from an unfamiliar perspective, readers might find it hard to understand the plot because they're used to always seeing events through one character's eyes. Narrative conventions can even be broken if the author wants them to be; it all depends on your audience's feelings.

Narrative conventions can be used in the same way to create a story for written assignments. In fact, narratives can be found in many academic texts from those who write about history or literature. The only difference is that academic writers must adhere to specific guidelines required by their faculty to submit work as needed. For example, an English professor might ask students to write a story about their experience in an English-speaking country and be graded based on how well they adhere to narrative conventions. If they do not, the work will likely be rejected and not count towards the final grade.

The rules of narrative conventions may get broken. If you do not want your story to follow the guidelines, then don't use them. The most important thing for you as a writer is delivering your message effectively to your audience. However, if you're writing about something that happened in history or literature, make sure that you follow whatever rules exist for academic writing. This means reading about the author or event you're describing and using their work as a reference to form your ideas. 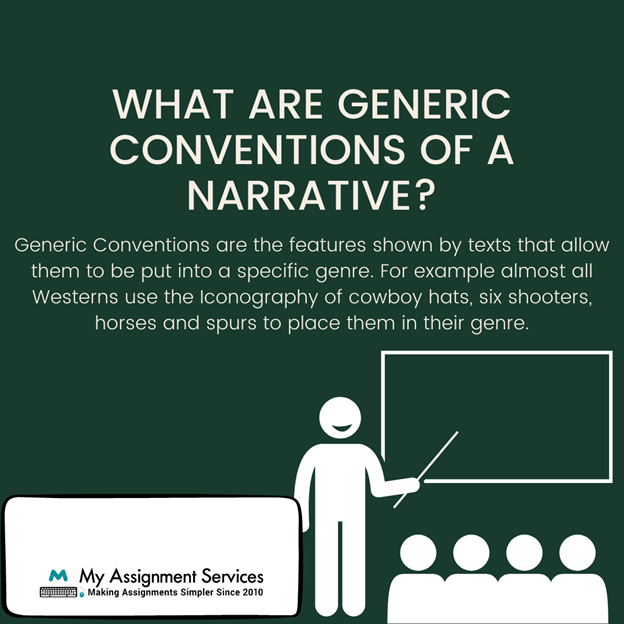 What are Some Common Narrative Mistakes?

There are many ways for writers to make errors when it comes to following certain conventions of narratives, but they usually involve three things:

Different Perspectives: When writers jump between different perspectives throughout their work, it can be difficult for readers to follow along. For example, in A Clockwork Orange, the narrator switches from Alex's point of view to that of another character who suddenly tells the reader that Alex has been caught and is now in prison. This change doesn't make any sense to readers unless they remember when Alex was captured, which can be tricky because it takes place in the middle of a fight with another group of teenagers.

Internal Consistency: When writers want to add backstory or more depth to their characters, they might introduce new elements that don't make sense with what readers already know about the story. For example, in The Great Gatsby, Nick suddenly recalls when Gatsby and Daisy were on vacation together before they ever met. However, this was never mentioned before, and it doesn't seem to add anything to the story other than a random memory that doesn't contribute to the plot.

Repetition: Again, when writers want to add more depth to their characters, they might repeat elements in the story over and over again. For example, if you read or watched Les Miserables, you'll notice how Fantine sings about her daughter Cosette every chance she gets. This repetition would be fine if it weren't because the song itself wasn't very well written, and people already knew about Cosette's existence before hearing her mother sing about her.

However, these are just some obvious examples of how narrative conventions can be used. The truth is that they can cause problems in almost any type of story.

Storytelling is an excellent way for students to learn, but when it comes time to write about their experience in the classroom, they're faced with a difficult task: how can you tell a story without making it boring? The answer lies in narrative conventions.

Though asking for academic writing help Canada through guided sessions is only available with My Assignment Services. You can get 1:1 sessions with all the complexities you are facing with narrative conventions. After availing of the session, you will be doubt-free. Hurry up! Book your session now by filling the form!

How to Write an Ethnography?