Canada Day 2022: Here's How People Around the World Are Celebrating It

Did you know that the National Day of America falls on the fourth of July? Of course, many of you are familiar with this fact. In addition, the Canadian national day is Canada Day. It is an equally anticipated patriotic day. The coast-to-coast Canadians eagerly anticipate this day to celebrate and regard their heritage with respect and delight. Old friends and new friends from a foreign land and the neighbours all come together for this day.

Moreover, if you ask the natives about this day, they would just tell you, "it’s Canada’s Birthday, so we must celebrate!” Yet, this doesn’t take away from the country’s right heritage and history. Celebrated since 1983, this day is the biggest celebration in the country. Plan to celebrate July in Canada? You are always welcomed warmly. Just get your red and white attire ready.

Here’s what you must know as a traveller or someone new to the country. Read forth to know the history and celebration ideas. 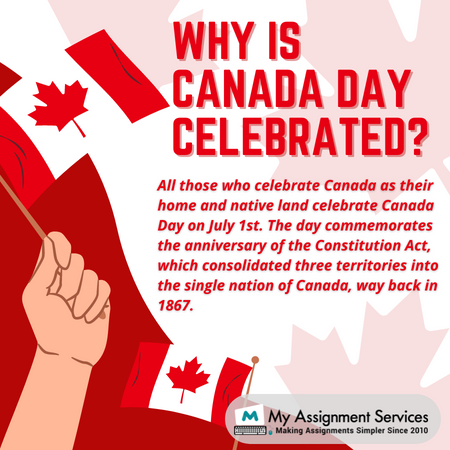 What is the History of the National Day of Canada?

Canada Day - Fête du Canada in French - the federal holiday of the Canadian Confederation falls on the first of July every year. Initially known as “Dominion Day”, this day marks the observance of three American confederations: Nova Scotia, New Brunswick, and the Canadian province (consisting of Quebec and Ontario).

The "British North American Act" passed on the first of July 1876 unified the three colonies. The Canadian Dominion has been a semi-independent unified nation since the unification. Additionally, Canada became a sovereign state of Great Britain; it is the independent nation that we know today.

Moreover, the terms of the “Canada Act of 1982” and the “British North American Act” restored the democracy from the British to the Canadian Parliament, making Canada an entirely sovereign nation. Thus, Canada Day came to be. The democratic nation we witness today is the result of unification.

The most successful World’s Fair of the century is held in Montreal - World’s Fair (Expo 67). It is a symbol of the centennial anniversary of the unification of the Canadian Confederation.

The unification occurred in 1982 and came into effect in 1983. Since 1876 the Canadian nation has added six provinces and three territories to the map. The most recent addition was Nunavut territory in 1999. Currently, the country comprises thirteen provinces and territories. This day is gloriously celebrated. Yet some origins stories aren’t as glorious. Let’s find out why?

Why Is There a Divided Opinion Over Canada Day Celebrations?

Furthermore, on July 1st 2022, Canada will celebrate the hundred and fifty-five years of its independence. With the Covid restriction lifted and people waiting for this day with new vigour, it is a cross-country fest. Canadians celebrate this day with no less excitement than Christmas. Moreover, it is a national holiday, so all citizens are expected to participate.

But, a recent revelation has soured the festive mood for some. It started with a recent report revealing the forced conversion of over 150,000 indigenous children to Christianity. They were notoriously taken away from their families to attend missionary schools. These kids weren’t allowed to speak their native tongue and were treated inhumanely.

In addition, the National day of Canada marks the memorial day for Canada’s eastern province. The loss of the Newfoundland Regiment in the World War I battle is a sombre occasion. Over seven hundred Newfoundlanders lost their lives in the Battle of Somme. Hence, there are divided opinions on the celebrations.

Also, “This coming Canada Day, I think we all need to pledge ourselves to do what we can to continue that effort to make Canada better, all the while respecting and listening to those for whom it’s not yet a day of celebration,” are the words of the prime minister Justin Trudeau the recent revelation.

Did you know the Canadian national anthem “O Canada” is originally in French? Quebec on June 24, 1880, marks the first-ever performance of the national anthem.

This situation has become a tipping point to welcome new meaning and remembrance to Canada Day. Every citizen vows to remember the deceased and bridge the differences with efforts and elation through the celebrations. On this day, you will witness several different forms of celebration in the country.

How to Celebrate Canada Day in Different Parts of the Country?

Firstly, if you are new to the country or a traveller, you must read forth to know all the bright places to be on this day. Additionally, you must also learn the traditions and celebration norms in the different parts of Canada. Here’s your guide:

Head to the water and enjoy your Canada Day celebrations on a lavish boat. Hop in a kayak or mini-cruise and witness the fireworks from the water. The warm lakes in British Columbia’s Okanagan and the Georgian Bay in Ontario are the hotspots for this experience. Summertime is boat time in the country, so don’t miss out.

Ottawa, the country's capital, is the best spot to be if you visit the country near the celebrations for the national day of Canada. You can join the special events and festivities in the city. Plus, you shall never miss the free fireworks show and concerts. You can experience it all at Parliament Hill.

Moreover, festivals are going on in different parts of the country. Head to Newfoundland at Signal Hill to celebrate the sunrise. Also, in Toronto, for the Redpath Waterfront Festival, you will experience the Lumberjack show and explore the Canadian Navy ship.

Canada has a ton of beaches. Plan a beach day to the coast beaches on Vancouver Island and explore the hidden waterfalls. Manitoba, Quebec, and Ontario are also hotspots for travellers planning a beach hopping trip.

Canada completed its sesquicentennial, or a hundred and fifty-five anniversary, on the first of June 2017.

Celebrate your Canada day with all such attractions as the country offers at low or no cost. Your plan entails the vibe for the celebration. So, make sure you know how you and your friends/family can have a great time on this day.

If You Plan on Celebrating Canada Day In Ottawa, Remember This

Ottawa is the capital city of Canada, yet it isn’t the only city that celebrates with much vigour. The different cities and provinces celebrate Canada day with different festivities. Visit Charlottetown (the capital of Prince Edward Island) for a week packed with celebrations. The city is the birthplace of the confederation as it hosted all the key figures during the unification.

Additionally, the Canadian mountains offer a majestic experience when you go exploring. You can also go on a hiking trip. Celebrate the national day of Canada in a serene environment. Go for an overnight trip or a day-hike. The Caribou Mountain Trail in Yukon, the Labrador Pioneer and the Footpath in Newfoundland are among the popular trails in the country.

Hence, many wonders remain unexplored unless you put yourself out there. Taking this national holiday can be your excuse to discover Canada’s heritage and the culture amongst the locals.

A Comprehensive Guide to Nursing Informatics