Can you even distantly imagine that the orthodox new year has its roots in Russia? Just like any other surprising fact this also come across as astonishing as possible. It might also be amazing to know that while we all will be ending with the holiday season; Russians won't be finished enjoying winters till mid-January. Well, that is how it goes in Russia. I am intrigued to guess. How many people will be opting for Russia for next Christmas holidays? Russians have this added privilege due to their historic heritage. Tradition also gives Russians an added benefit to enjoy the view of their Christmas tree till the holiday season ends. They call it the mark of Old New Year, in those parts of the human dwellings.

Following the old Julian calendar, the new year is marked with celebrating Christmas till late in the second week of January. This calendar has however been replaced by the Gregorian calendar, which is used worldwide nowadays. 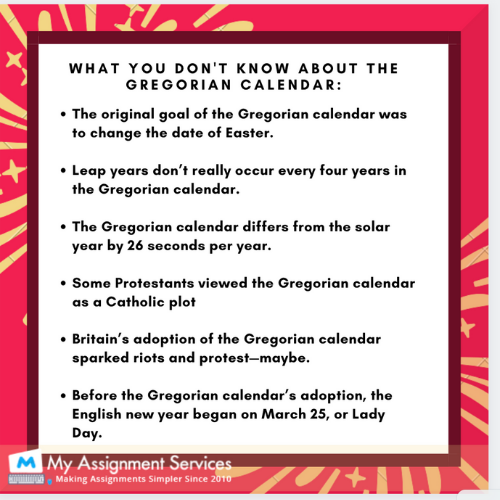 Ever Wonder How it all Started?

The Existing Date for Easter

The Occurrence of Leap Year

The Difference in the Solar Year

Gregorian Calendar Was Once Considered a Catholic Contrivance

Acknowledgement of Gregorian Calendar Even Caused Riots in Britain

How Do You Get HD Grades In An Assignment?

What Are The Ingredients For Writing The Best Argumentative Essay?