R vs Stata: What Do You Need to Choose for Data Science?

R is an open-source programming language mostly used for statistics, data mining & visualization. Stata is also a leading technology in statistical analysis. R and Stata are two of the most commonly used software among data scientists to do their job more efficiently by analyzing the data sets visually. There are some major differences between these languages that help us to understand which is good for what kind of work. This blog clarifies the position of both languages after comparing them on various grounds like features, packages, etc. R vs Stata: which one is better for data science? 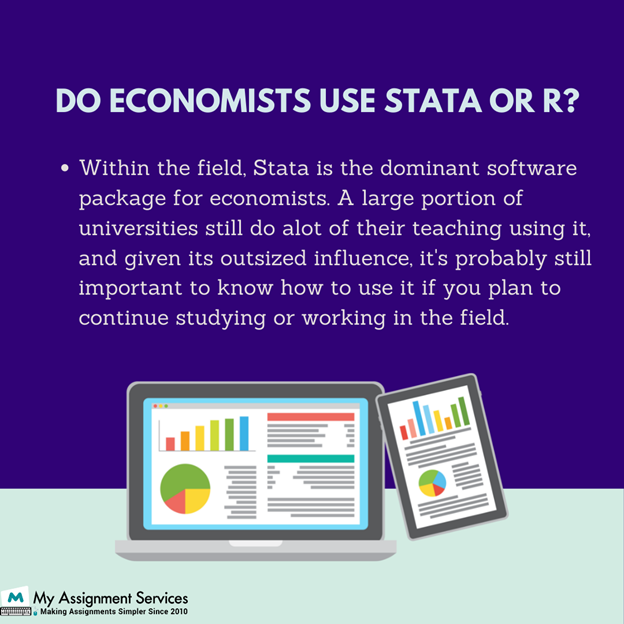 Stata is a software package that provides everything you need for data analysis, data management, and graphics. Stata can manage all aspects of statistical analysis, from importing external sources to creating tables and figures for reports. The language syntax follows the traditional format where users type commands at a prompt and then wait until they receive a response. This system has been helpful in disseminating computing skills among the masses as well as making it easy for novice users to learn quickly. As far as data exploration and visualization is concerned, Stata works well but lacks other languages like Python & R because it doesn't come with pre-loaded packages/libraries, which sometimes makes programming cumbersome.

R is a software package that provides everything you need for data analysis, statistical modelling and graphics. It has become very popular among statisticians because of the ability to quickly try out new ideas with the help of its advanced libraries, which are freely available on the community website. R's popularity can be attributed to the success of the ggplot2 library, which makes it possible to visualize complex datasets in a simple manner. The vast community support helps beginners with their work by providing them with working codes online. Codes written for a class or personal projects can easily be shared by posting them on websites like GitHub & Bitbucket. However, this language is not meant for novice users as programming commands follow traditional syntax format, requiring users to learn to code before using it efficiently.

The features of R are listed below:

Stata vs R: Top 6 Differences Between Them

Stata is a powerful statistical software that comes with various applications related to data analysis. StataCorp developed Stata for better visualization and interaction. R is also used as an open-source language to perform the same tasks of data mining & analytics. There are some differences between these two programming languages, which help us to understand the position of both the languages in the field of Data Science after comparing them on various grounds like features, packages, etc. 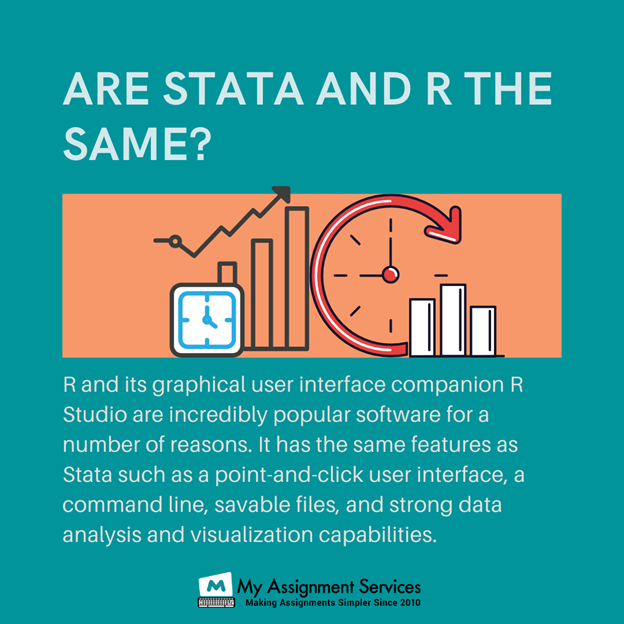 Here are the differences that will give you a clearer picture about which one can do what and where they need to be used:

Visualizing data effectively is essential for any kind of data science project. R & Stata both can do data visualization, but they have their own way of doing that.

Stata has a built-in Data Editor, which is used for data analysis and visualization of simple graphs or charts with the help of its graphics editor. On the other hand, R has many visualization packages to visualize data in various ways like 'ggplot2', 'Trellis' etc., These packages may be useful depending on the requirements of the project. The advantage of using these packages will decrease total development time while performing analysis with the R programming language. It also helps users to get more flexibility than Stata at times when it's required. However, this approach does take longer than just working in the Data Editor window in Stata.

There are several ways to handle data in Stata & R., But the following will be the most common ways of handling data sets for both programming languages.

To import any kind of data set, Stata has a 'use' command used to upload the data set from external files or memories into Stata itself to be analyzed inside Stata's environment. It also allows users to specify an output path where users need to save their work after importing a new dataset. On the other hand, R deals with the same task by reading function, which allows users to read data files directly into the R environment and work with them according to project requirements, just like Stata does.

Both R and Stata can handle the statistical analysis and provide users with a set of commands to perform statistical functions on their data sets. So, which one will be better for statistics? Let's find out:

Generally, both R & Stata do not have any major difference in helping users with statistical analysis. But there are some differences between these two programs when it comes to Mathematical Operations (Arithmetic). While working in R language, users need to add 'set precision' or 'digits' at the beginning of code before running it on their computer system while performing memory intensive calculations like matrix arithmetic etc., As we know that either 32-bit or 64-bit version of R runs on our system, but the precision limit will be different for 32-bit & 64-bit. So, using 'digits' or 'setprecision' can help us run them correctly.

On the other hand, Stata is designed to use double precision arithmetic because it's compatible with both 32-bit & 64-bit systems. But because of this compatibility, Stata might lose accuracy while performing calculations at times which means you just need to work around that by changing your data types and save these changes before performing anything further. There are some major tips related to this problem, like reading more about memory intensive functions in Stata help documentation.

R has more packages to perform data analysis while working in the R language compared to Stata. These packages are being written by researchers of different fields or data scientists regularly on GitHub which is an open source community where users can find different packages coded for certain needs. Although there are some ways to install new packages on Stata, it might be difficult for some novice users if they are beginners in programming languages.

Stata is commercial software, while R is free. Still, both have clients and servers available for deployment of the projects on local systems or cloud-based computers like Microsoft Azure etc., So, organizations can benefit from using these programs by implementing them on their servers since both of these programs do not require a permanent license to run on a server.

Stata and R are both open-source multipurpose statistical software packages, which can be used for data analysis, statistical modelling and data visualization, as well as publishing results of these activities in various document formats or generating dynamic reports from the same. Both programs have been recognized as the most powerful programming languages for statistics by experts all around the world. But generally speaking, researchers with less experience in using these tools might find working with Stata more user-friendly compared to R because of its interactive GUI where users just need to hit enter buttons without knowing anything about coding language behind that operation, whereas R needs some knowledge about coding language but is more flexible when comes to tabulation, data analysis and statistical procedures.

R has more packages for statistical analysis, while Stata might be slightly better when it comes to deployment on local systems or cloud-based computers. There's no significant difference between these two tools when they come to their user base because millions of people are already using both programs all around the world, which means you're most likely going to work with one of them in the future if you haven't started yet with any of them. So, R vs Stata is a battle where both software are equally strong & there's nothing like "which is better?"

If you are looking for stata assignment help from industry experts, our guided sessions are the best fit! You can learn everything about it from our team of 1450+ subject matter mentors. We have the best mentors for stata programming assignment. Apart from this, our mentors' extensive skills make them capable enough to provide stata homework help online sessions at any time convenient for you. So, what are you waiting for? Get in touch with us right now!

Dramatic Irony (Literary Device): What It Is and How Beneficial Is It?

What is the UCLA Acceptance Rate and How Do I Improve My Score?