The Jews are the most ancient people on earth who resided in Europe for more than two thousand years. Their religion is monotheistic where they believe in a single and all-powerful God and regulate their life through ten commandments explained in the Old Testament.

Moreover, the Jewish identity relies on various practices and all the rituals signifies the crucial phases of Jewish life. They celebrate year-long festivals for remembering the crucial events materialized in Jewish history. The Jewish faith is integral to the worship of God and the Synagogue features great importance in every Jew’s life.

if you are somewhere in Israel and go through a bursting celebration, food, sound, prayer, and heed Shanah Tovah all around then you are lucky enough to experience Rosh Hashanah, the Jewish New year. According to Jewish belief, it is the head of the year or the first of the year. The two-day long festival instigates on the first day of Tishrei known as the seven months of the Hebrew Calendar and falls mostly in the month of September or October.

The festival remembers the creation of the world and kicks off the beginning of the Days of Awe which is a ten days long period of self-examination and penitence that curtains in the Yom Kippur or the Day of Atonement. Apart from Rosh Hashanah Yom Kippur is another High Holy Days in the Jewish culture.

In this festival of joy, the Jewish people pray to God and seek forgiveness for the wrong doings during the past year and remind themselves to stay away from repeating the odds in the approaching year. So ultimately the festival is all about improving the character, mindset, and being better over the years. Hence Rosh Hashanah is a must to experience festivals which urge the people to get better and better and make every effort for self-cleaning.

Rosh Hashanah: What is behind The Card

Usually, the Hebrew calendar starts with the month of Nisan and the seventh month is Tishrei when the Jewish people celebrate Rosh Hashanah. It is more about the creation of the world rather than the New Year. The founding religious text of Judaism, Torah doesn’t show any evidence of Rosh Hashanah but it came up in the Mishna, a Jewish code of law compiled in 200 A.D in a rabbinic text

According to Jewish belief, God appraises all the creatures in the world during the 10 days of Awe and decide their future in the coming year. Moreover, the Jewish Law states that God writes the names of blameless people in the book of life and convicts’ death to the impious ones to death on Rosh Hashanah. For this reason, the Jewish people perform teshuvah (atonement) starting from Rosh Hashanah to Yom Kippur and make prayers, good works and reflect on their past doings.

If you are in a quest to know how to celebrate it, then for your information, Rosh Hashanah is not like modern days celebration. There will be no raucous parties, music, and sounds to the fullest but a quiet and meditative festival.

The Jewish celebrate this festival for two days and these two days the work is completely prohibited and they spend most of the time in the synagogue. Moreover, they offer prayers to God through liturgical texts, songs, rabbis whereas the congregations follow a special prayer book machzor.

During Rosh Hashanah, the Jewish offer three sets of prayers known as Malkhuyot for addressing the Sovereignty of God, Zikhronot, remembering the past doings, and Shafarot where they display their nervous hope of the future.

After the celebration the Jewish return home for a festive meal infused with tradition along with festive lightings such as two candles for spreading the positivity in the coming years as well. Some of them even wear new clothes to display the significance of Rosh Hashanah.

On Rosh Hashanah the Jewish also practice Tashlich where they throw bread pieces into a water body and recite prayers. The belief the pieces of bread are the representation of their past sins and by flowing those in the water they become cleansed and refreshed.

The Shofar is analogous to Rosh Hashanah, it is also one of the Rosh Hashanah Symbols which is primarily a trumpet made of Ram’s horn is the symbolic representation of both Rosh Hashanah and Yom Kippur. It is an ancient instrument and its mournful call represents the attornment. According to Jewish tradition, the Shofar play four notes on Rosh Hashanah such as

For these nostalgic sounds in Rosh Hashanah the festival is also known as Yom Teruah, the day of sounding of the Shofar. Besides this, the Jewish offer Tzedakah which is all about making a charity to the needy people and make every effort to bring in new promises in the year to come. 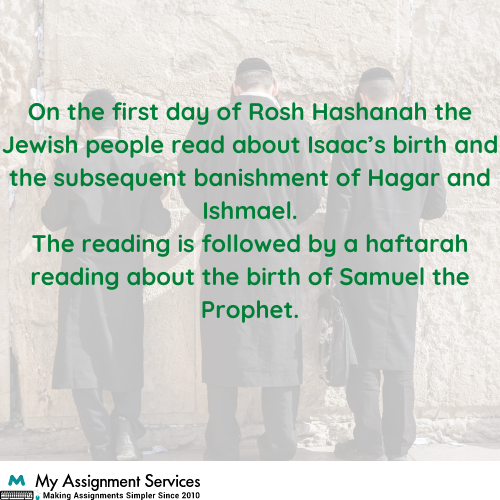 Rosh Hashanah is all about Sweet Foods

If you think about Rosh Hashanah foods then it is the most crucial part of the festival. the Jewish include many traditional meals, they eat sweet foods with the hope to experience a sweet new year. There will be lots of new fruits, especially pomegranate. Most people also eat the head of a fish and leave the tails as they wish to the leaders but not the followers.

Another belief on eating only the head of fish is because Rosh Hashanah symbolizes the head of the year. Challah, an emblem of Rosh Hashanah a baked rounded bread with raisins is another food that takes a crucial place in every Jewish household during this time. 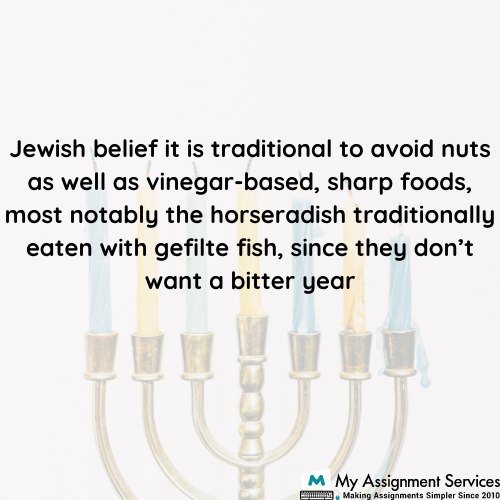 However, the most significant food during Rosh Hashanah is the apples dipped in honey for representing the sweetness. Besides this, the Jewish believe apples have all the healing properties, and adding honey adds sweetness to their future hopes. All the foods provide a deeper meaning for the celebration of Rosh Hashanah.

How to Write a Reflective Essay for University?