Three Disadvantages of Transactional Leadership That Might Be Affecting Your Team

A leader is a person who knows the way to achieve the goal, and they are tasked with guiding their teams in the same direction. Still, guiding always doesn't mean keeping a firm grip on the team. Many think that being a leader means being assertive, but it is also important to be a patient listener.

Teams with great leaders can create history. An epitome of this is Mike Krzyzewski, better known as coach K. He is the only coach in the History of American basketball that leads the team to three gold medals. His impeccable record of five national titles during his time at Duke University adds to the fact.

The Transactional leadership type is part of the three leadership styles in FRLM (Full Range Leadership Model). It is useful for ensuring precision in tasks and maintaining order in the team. - Wikipedia

There's a fine line between being a transactional leader and autocratic leadership. A successful leader is one that is focused on the team along with the goal. Achieving a certain target requires joined efforts, and the leader must understand that all team members must be on the same page before proceeding.

In this blog, we'll discuss what exactly is transformational leadership, some transactional leadership examples, and how it might be disadvantageous if not practised carefully. 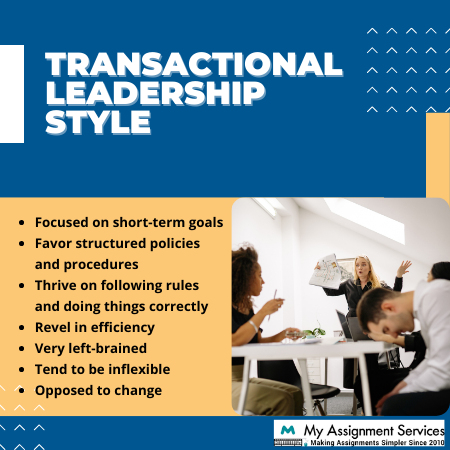 What is the definition of Transactional Leadership?

First and foremost, we need to understand the definition of transactional leadership. It is a system based on reward and rebuke. The leader holds absolute power in the team. The team member may get praised or punished based on their performance. So, we may say it possesses the ideology of a strict teacher.

In such a leadership style, the team has to follow a predefined agenda and task flow to the dot. It is useful for delivering short-term goals. Also, tasks that require precision and timely delivery can be well established under such leadership. Transactional leadership is also beneficial as it depicts clear goals and outcomes while maintaining a balance in the team.

If your teacher is tough on you, wait until you meet your boss, as they don't work under a tenure. - Bill Gates

Employees can clearly see their progress as the leader provides feedback often. Transactional leadership, when executed effectively, can be transformational. A transactional leader focuses on individual performance - how an employee functions in the organisation. It is a complete exercise of power based on knowledge; it has its pros and cons that we'll discuss further.

As a management student, you will have to deliver several research papers and conduct studies on multiple business and leadership subjects. Although you may be apt in writing, finding the right resources is where the challenge arises. You may fill out the enrolment form to get the best-quality free academic resources and management assignment help from experts in the field.

What are the Characteristics of Transactional Leaders?

Conditioned rewards are the primary characteristics of such a leadership style. It is the way of the manager to motivate the employees. The leader constantly monitors the performance of each employee and rewards them once they meet their goals. This contradicts the traditional procedure of reviewing the performance at month's end or after some time as the team member is offered recognition instantly as per their achievements.

In a passive transactional leadership style, the leader focuses on the employee's areas of excellence. The leader supports the team members to work on improving their skills unless required to do so, and they don't intervene until they have no alternatives. Passive leadership is good for leading the team but often takes a long time to meet the goal due to the leader's laid back approach.

Did you know that globally, the gross investment in leadership training was $358 billion?

These three are the main characteristics of the transaction management format. Out of the three leadership styles defined by Kurt Lewin, this one is the most intricate as it comprises characteristics from the other two - transformational and Laissez-Faire- leadership styles. If not implemented correctly, it may lean towards one amongst the two, which is further disadvantageous for the team.

How Do These Transactional Leadership Examples Prove that it’s Disadvantageous?

There are several advantages and disadvantages to various approaches to a task. Yet it doesn't make it any easier for beginners to learn the difference between a disadvantage and a drawback. A drawback is short-lived and can be conquered easily, but a disadvantageous approach can adversely affect the team in the long term. Great leaders make great examples of something, so here are three such stories and some noteworthy points that you can avoid.

When it comes to directing a team, Bill Gates has two key goals. He has an autocratic or transactional leadership style. Authoritative leadership is a style of management in which the industry's leader or CEO wields the most control. He even signed the checks for Steve Ballmer, who took over as CEO after Bill Gates retired. Such a management style does not allow for the development of close relationships.

He was the Green Bay Packers coach - a professional American football team - that never lost any season under coach Lombardi's leadership. He would make the team practice the same plays and moves over and over again to the point that the opponent knew it as well. He proved his leadership through his impeccable record. Still, it is an example of a lack of appreciation for creativity under transactional leadership.

He's best known for leading the US forces that crushed the Iraq and Persian Gulf wars. He's one of the most acclaimed army personnel in the country's history. His leadership style is well expressed in his quote, "if I have to choose between character and strategy, I will go without a strategy." He was more focused on his instinct than on strategising, which is a disadvantage in the long term.

A Harvard 360 review conducted in 2019 showed that women scored better than men in 17/19 categories that distinguish good leadership from the average and poor ones.

These three leaders practised transactional leadership and were more than successful in their work areas. They lead their team to new heights of success and excellence based on their knowledge. But, for beginners, such an approach can be difficult to get a hold of, and you may feel the gaps in the team. So, the bottom line is transactional leadership is efficient if practised effectively.

The Complete Guide to Sensory Memory

How to Get the Most Out of an Online Programming Assignment Sample?