To What Extent Was Religion the Main Reason for Rebellions

There is no doubt that religion has been an important factor in shaping the social fabric of the contemporary world as we know it today. Religious communities and factions are responsible for creating a new world order in which there is mutual interaction between various communities. Since different religious communities have different interests, it is only natural that conflicts arise out of the varying communal or factional objectives.

However, the contemporary world order is characterized by peace, harmony, international brotherhood and a sense of extended community. In this article, we shall discuss the many factors responsible for creating some of the most major historical conflicts, civil wars, popular uprisings and rebellions. We shall also look at the intricate factors that have caused these developments around the world. To understand to what extent was religion the main reason for rebellions, it is important to take a look at the factors that make religion a divisive force rather than a uniting one. 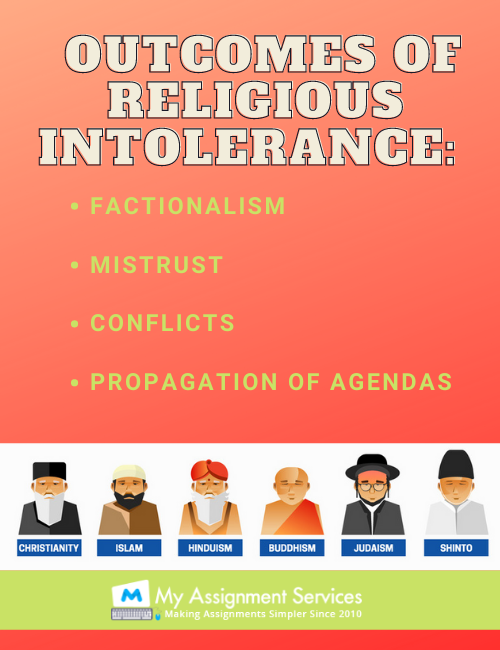 Creating Segments Within the Society

Religion has been one of the most important factors that have caused a socio-cultural bifurcation of society since time immemorial. In simple words, conflicts arise mostly out of diverse beliefs and sectional interests. Persons associated with a certain religion are naturally conditioned to believe that their own religion is superior to the other religions of the world. This thought is ingrained into their conscience from a young age. People are taught to look at their own religious beliefs as more pragmatic, balanced and fair. This gives them the viewpoint that their own religion

The difference in customary practises: the variegated customary practises established by the different religious communities are often viewed as hostile displays of their own thoughts and beliefs. Most religious scholars preach simplicity, austerity and modesty when it comes to religious demonstrations. However, considering the natural characteristics of human nature, it is often deemed threatening when one is exposed to a vulgar display of power or wealth from another person or group of persons. Also, while the diversity of practices and beliefs should be tolerated and even celebrated, they are viewed as hostile displays of power.

Oppressor-oppressed narrative: A significant cause of religious conflicts is the propagation of the oppressor-oppressed narrative propagated by a people with ulterior motives. It is important that societies and people at large are encouraged to take a more objective and practical view of religious co-existence. However, owing to ulterior motives, politicians and even religious scholars propagate the oppressor-oppressed theories. These theories are often based on historical prejudices, past injustices and stray incidents. These small factors are misused by persons with vested interests to create hatred and resentment among communities.

Lack of sensitivity towards the diverse religious practises and beliefs: lack of sensitivity and tolerance towards the religious practises of other communities also supplements the mutual misunderstanding and lack of tolerance between members of the various communities. It is important for religious scholars, teachers and other stakeholders of the society to take a responsible part in the collective teachings about the religious fabric of the society.

It is important that teachers and parents play an active role in educating young minds to understand and appreciate the rationale behind different religious practices. Getting an objective understanding of different religious practises helps individuals in understanding the larger context of the customs. Most religious practices are based upon a foundation of a strong rationale. Understanding the underlying rationale can help people in developing a more tolerant and appreciative view of these customs. In the study on to what extent was religion the main reason for rebellions, many scholars believe that lack of sensitivity to others beliefs has played the most important role.

Antagonistic viewpoints: most religions preach peace and harmony. However, the religious provisions may also be misconstrued to promote certain vested interests. Forced conversions, missionary campaigns to propagate religions and the promotion of misleading falsities has also been a cause of social unrest since time immemorial.

The catholic protestant conflict of the 15th century: the protestant-catholic conflict attained tremendous proportions in the 16th century. What started off as a minor conflict between certain people at the event of Sunday prayers culminated into one of the biggest religious rebellions of modern times. After this incident, it was widely propagated by religious preachers and publications of the time that the two factions were at loggerheads with each other. It was a major conflict of the time that caused upheaval across Europe.

Historians have widely been quoted regarding this conflict as one of the turning points of European history. Whereas the uprising was characterized by singular incidents around Europe, it was responsible for shaping the colonial history of the world. European countries at that time started siding with one of the other factions. The government started lending financial support to religious organizations and religious lodges. Many historians believe that it was the first instance of the dangerous amalgamation between religion and politics. You can find academic guidance on topics related to antagonistic religious viewpoints from History assignment help experts by My Assignment Services.

Propagation of Ulterior Motives and Agendas

Another factor that has caused religious rebellions in the course of history is the propagation of ulterior motives for political gains. It has been seen from time immemorial, that propagating religious beliefs was easier than propagating social welfare agendas. People accepted religious similarities more readily than any other form of association. People are inherently conditioned to develop a sense of belonging and affiliation with their religious communities. Being around people with the same set of values gives them a feeling of assurance and commonality. This trend however is not in the interest of creating a peaceful new world order. It is important that the masses are turned away from such thoughts and mentality. The kit is the prerogative of governments and leaders to refrain from using religious agendas to gain followers. Peace, tolerance and universal harmony should be promoted for the larger good of the world community.

Lack of emphasis on propagation of tolerance: it is a fact that hate has more followers than tolerance. Therefore, it is important that sentiments of tolerance and harmony are propagated with greater emphasis than hatred and resentment. It should be a part of curriculums in primary and secondary schools across the world to teach children to be more accepting and accommodating towards socio-cultural differences. The lack of understanding about other religions is also one of the main reasons behind mutual resentment and animosity between cultures and communities.

Fragmentation within a larger social framework: one of the main reasons behind historical rebellions caused by religion was “fragmentation. Another word for fragmentation within a larger social unit is factionalism. Factionalism can be defined as the difference in a set of opinions or views. Factionalism arises when people start following contemporary leaders instead of the religious texts or edicts as their guiding principles. This causes the emergence of factions within the same socio-religious backdrop. Religious leaders often also misinterpret the religious texts and edicts to suit their motives. People are bestowed with a modified view of the religious texts.

Conquering the threat with awareness and tolerance: Where diversity is feared rather than accepted and appreciated, it is natural to view another person’s religion as a threat or act on non-allegiance rather than as an outcome of diversity. This threat theory is widely exploited by political leaders for their vested interests. Religion has for long been a bone of contention between people of different religious communities. Conflicting religious sentiments and propagation of falsities to aid vested interests have caused uprisings and popular movements throughout the timeline of history.

If you are a history student, you will have to study the historical conflicts and uprisings that have arisen around the world owing to the divisive forces within the society. History assignment help from My Assignment services can provide you with a better understanding of the factors responsible for the contemporary scenario. We can help you get the grades you desire by providing you with a detailed and elucidate account of the factors responsible for historical conflicts. To know more about our services, simply fill the form with your query.

Probability Distribution of the Random Variable