Political Dichotomy between Capitalism and Socialism is a century-old tiff that even the once in a hundred years pandemic has failed to subdue. A fresh case of political agenda being pushed amid pandemic is the Melbourne Student Union run C &SC mandating that AGMs be conducted by every student society this year. Some claim it as an intrusion of democratic rights while those who are privy to the history of purge years; perceive this as an attempt to silent the Trotskyite voice on the campus whilst a severe pandemic rages through people, jobs, economy, university life and through society as a whole in Melbourne. 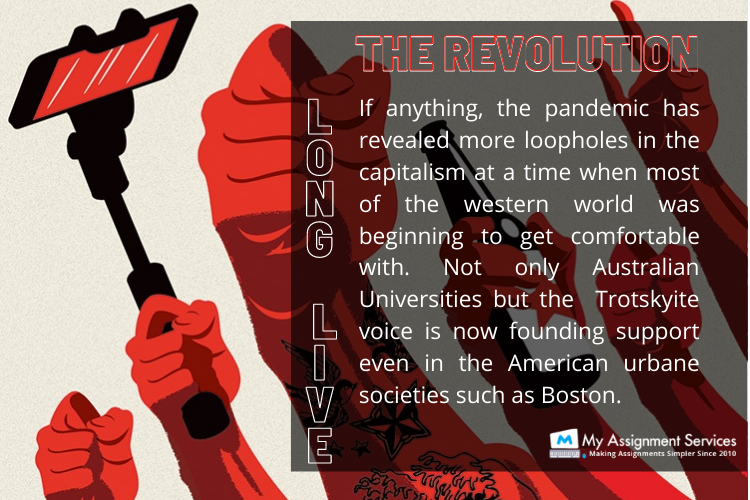 The Student Union at the University of Melbourne dictates that all student societies and clubs must complete due diligence to stay affiliated even during the COVID-19 Pandemic.

On July 28th student societies at the University of Melbourne received an almost threatening email from the Club and Societies Committee (C&SC) mandating them to hold AGMs in 2020 else their affiliations will be under the scanner. Inexact words of C&S official Fiona Sanders, “those who do not complete re-affiliation may be disaffiliated.”

Why conducting AGMs is difficult during COVID-19 Pandemic.

Annual General Meetings (AGMs) even if held online requires an intricate agenda under bureaucratic purview. It also demands attendance of other societies and above all the new notification demands the AGMs to be conducted as per the guidelines as stated by Jordan Di Natale; a post holder at C&SC and member of the student group Stand Up further presented detailed guidelines of the AGM.

The C&SC letter states that AGMs can be held online, however, a minimum of 15 bona fide members of the University of Melbourne Student Societies or Clubs must attend the annual meeting.

Many are terming this as a brutal attack on student rights in Australia’s most legacy-rich university campus and are flabbergasted that such a measure is announced in while Victoria is witnessing a new wave of corona infections and the local parties have escalated restriction on retails, personal travel and even the educational institutions have been asked to stay shut.

The Protest led by IYSSE

International Youth and Students Society for Equality (IYSSE) deems the AGMs mandate as an assault on student rights particularly at a time when the student life at the campus is disrupted beyond comprehension. They along with a few other societies have even written retaliated with their protest letters to the C &SC.

The president of IYSSE, Evrim Yazgin (who is a vocal protestor of this move by the student union) says that because of social distancing norms, most universities being shut; many student bodies have not been able to conduct physical reach outs on and off the campus and thus have not been able to inflate their membership base. He further terms C & SC’ move as completely unfair and concludes that such a mandate will lead to disqualification of many student societies that have contributed profusely in the past and will only result in further derogation of equality and cultural values at the campus, already ravaged by the pandemic. 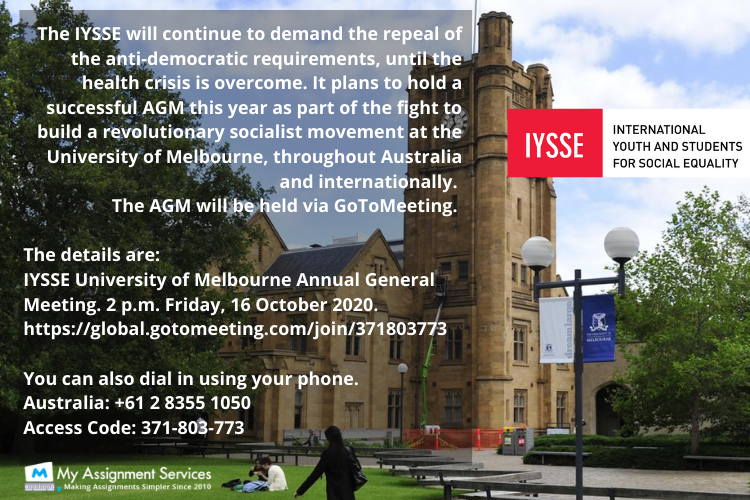 It is uncanny that the IYSSE letter received no response from the Student Union after which they were forced to take it to students and other clubs at the campus. One fellow president even responded with affirmation adding that they support IYSSE’s stand and they too will write a protest letter to the C& SC.

IYSSE along with some other clubs inclined towards the organic economies deem this as an utterly undemocratic act of discouraging school of thoughts that are against capitalism. They claim that a catastrophe such as a corona plague is now being used to silent clubs and societies that do not align well with the student union’s political afflictions. IYSSE has been openly propagating the failure of Capitalism in Australia.

The revolutionary socialist’s view is that while Australia’s economy is under stringent weight and in the worst shape since the great depression, the impact of Corona Pandemic on food supply chains and income disparity has decidedly revealed that the capitalism has failed. IYSSE favours a socialistic economy model to a capitalistic one and favours the socialistic idealism of Ivan Trotsky.

IYSSE maintains that C& SC is known for undemocratic initiatives and has, even in the past tried to cull opposing voices on campus. The IYSSE had to struggle for their affiliation for over two years since 2014 when they first applied. C&SC was quick to reject their first application stating that their ideologies mirror the Alternate Socialists; a pseudo leftist club.

It was only after when IYSSE came up with an open letter differentiating them for the Alternate Socialist Club and accusing C&SC that as an authority with the power to accredit student clubs, it was denying fundamental rights to societies that did not overlap with their ideology.

After gathering popular public support, IYSSE did get their affiliation in 2016 but yet again it is under threat.

The student union admits that they have received some opposing views to postpone the AGMs to 2021 but the members firmly say that no such concessions will be allowed.

The antiwar revolutionary socialist club will be holding their AGM in 2020 and are appealing all students to join them in raising voices against any form of authoritarian agendas on campuses in Australia and Internationally.