Did You Visit the Great “Vivid Sydney Festival 2018” Yet?

Each year, the entire city of Sydney is transformed into a visual sensation of light and music installations, but the Vivid Sydney Festival is not just all pretty colours and sounds though – it’s about exploring new ideas too. If you feel like your brain cells need a workout after lazing on the beach and, let’s admit it, drinking too much goon, Vivid Sydney is the one for you. If you are a student in Australia, you need to make sure that Vivid Sydney is in your list of travel from your city.

This year will be extra sparkly as it’s celebrating its 10th anniversary. So, if you’re travelling to Australia anywhere between 25th of May to 16th of June 2018, make sure you stop by to see the city in all its multi-coloured glory. Don’t know where to gaze your eyes upon first? We’re here to shine a light on the best bits!

What’s So Vivid About the Festival? 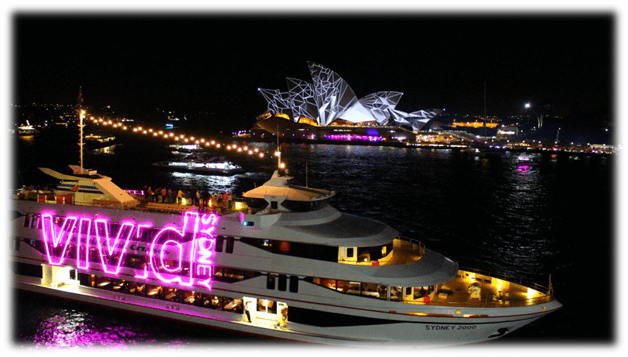 Vivid by the name, this Sydney festival attracts more than a million people to the illuminating collection of large-scale lights installations and projections (vivid lights) filled with music performances and collaborations; that also includes vivid live at Sydney Opera House, creative ideas, debates and discussions; wherein vivid ideas are thrown light at.

Good news for students is that the Vivid Sydney Festival is an event where art, technology, and commerce intersect. They can widen their spectrum of learning and capture some very crazy ideas about how art amalgamates with science. In its tenth year, Vivid is the largest festival of its kind in the world combining light, music and ideas.

What All Can You See in Vivid Festival Sydney?

If you are wondering what is so enthralling about Vivid festival Sydney, here are the things that you will find in Vivid Sydney 2018 setup: 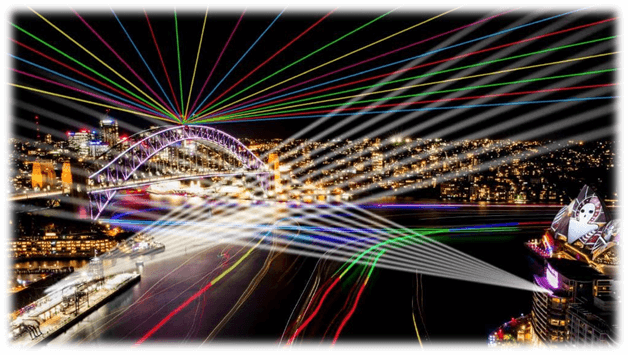 If you are at the harbour, you can grab a spot and catch an interactive light show from the bridge all the way to the Circular Quay skyscrapers. Vivid Sydney is stepping up their laser game this year, as they’ll be using lasers which are twice as powerful as any used before in Australia. This can be the most eye-catching element in the festival. 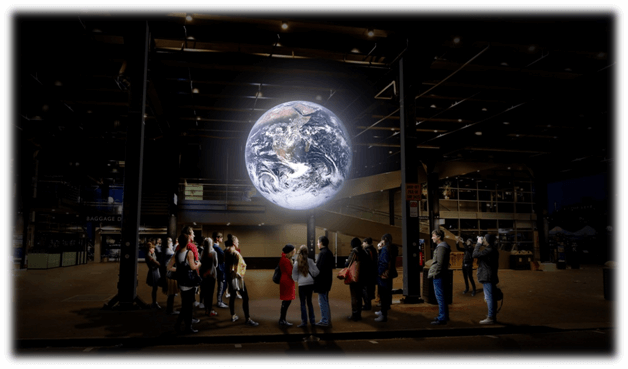 Was your childhood dream to become an astronaut? VisitOverseas passenger terminal, The Rocks, and feel like you are on another planet that too with an astronaut’s view of Earth. It has been created by the artist Luke Jerram, the NASA imagery of the globe goes hand in hand with a cosmic out of this world sounds by BAFTA-award winning Composer Dan Jones. 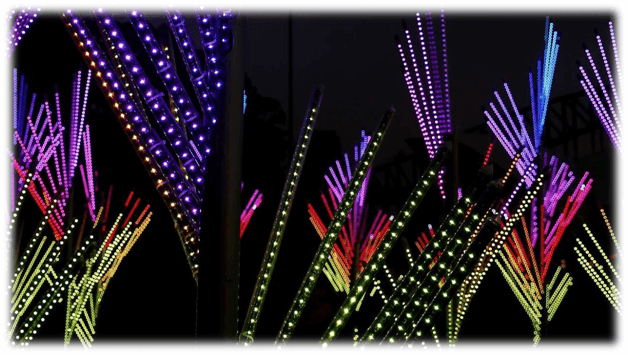 Walk through 'The Nautilus Forest' in The Royal Botanic Garden and see the branches of the forest ripple and pulse with colour. Here you can stroll through an illuminated forest full of spiralling trees as you explore the hypnotic and captivating work by Adrienn Lord, an Australian artist. With over 40,000 individually RGB pixels, the branches turn and spin with colour thus creating a completely different hue of lights across.

For all who are looking for a star-crossed lover, don your finest outfits, peek seductively from behind your mask and celebrate the ultimate ‘90s masquerade ball rock show, “Young Hearts Run Free” on 7th June 2018. Live tracks from the likes of Radiohead, The Cardigans and Garbage will make it a night to remember for you. 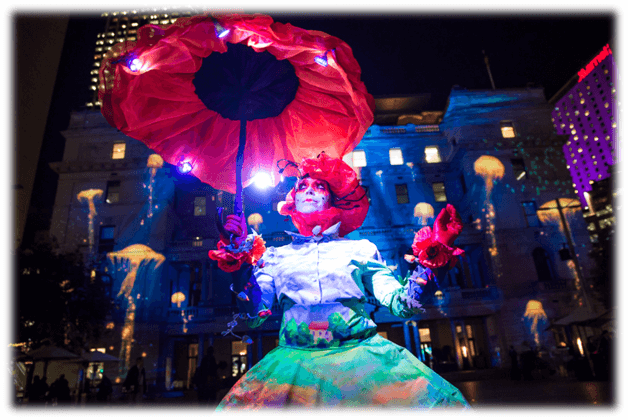 If you are one of those fashion enthusiasts who can wander 10 miles extra to find the right set of clothes to match your evening, The Rocks are setting the right show for you on 16th of June. Now you can take part in the conversation about eco-friendly materials and meet organisations that are helping to change the fashion industry into a sustainable one. 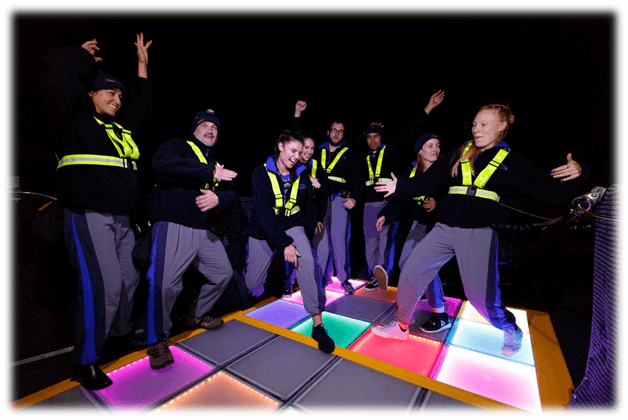 The dancefloor is back! Make the most of this annual festival with an experience that is well and truly lit. Take in sweeping views of a glowing Sydney with as you climb the iconic Sydney Harbour Bridge. There’s even a 70’s style disco floor at the top. Boogie face on!

There are many more parts of Vivid that you can explore!

Be A Part of Harmony Valley Now! 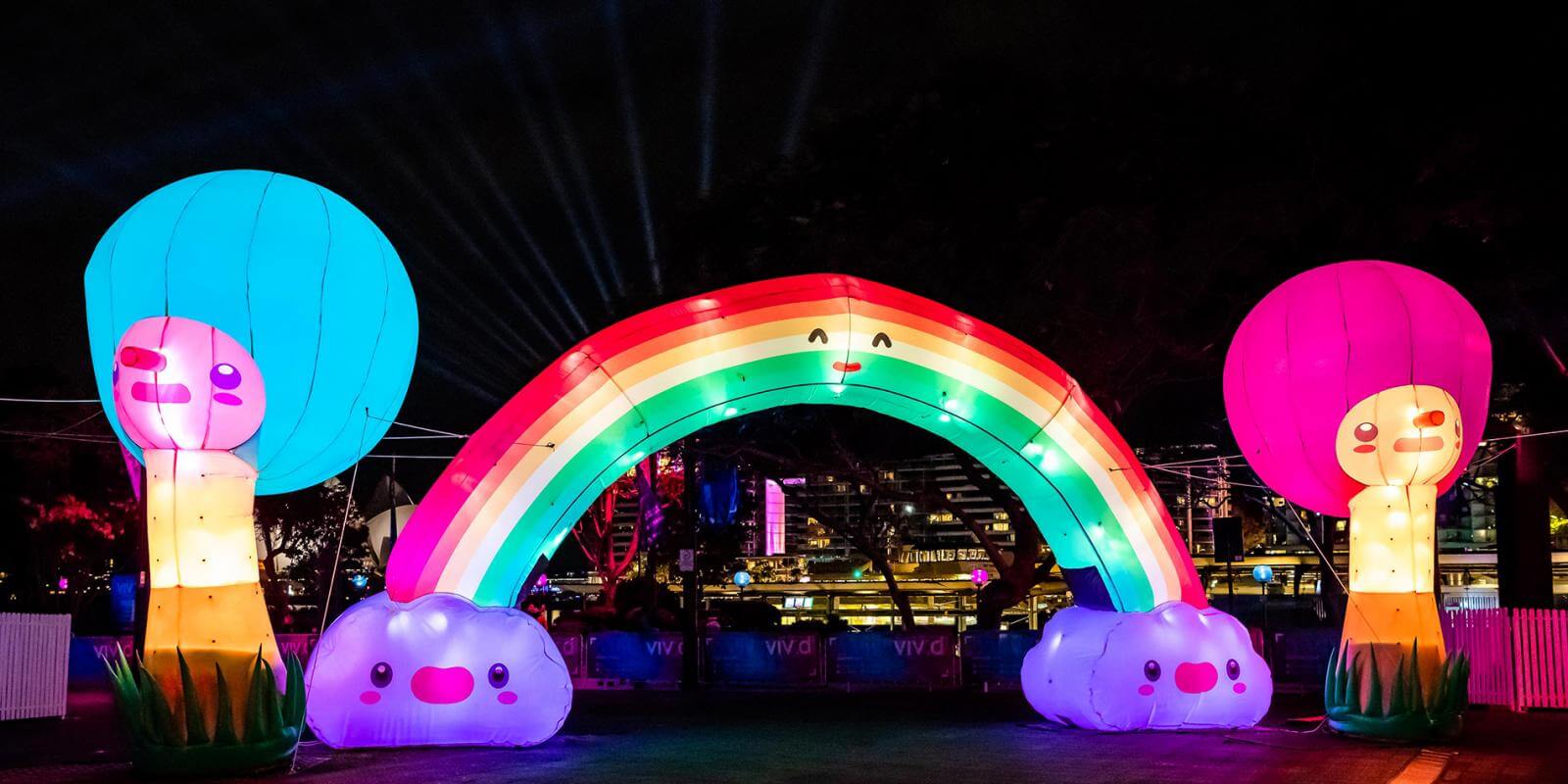 The installation is comprised of a set of large inflatable sculptures that reference Japanese ‘kawaii’ culture where the use of exaggerated cute aesthetics elicits and heightens emotions of nurture, playfulness and vulnerability.

Visitors are invited to interact with the sculpture by forming a human chain that connects with each end of the rainbow. That simple act of connection rewards participants by activating the sculpture, which springs into life with new sounds, animations and brilliant pulsing light.

Edison says, “The work aims to immerse audiences in a moment of belonging and common humanity, where participants enjoy a psychological experience of positivity, cooperation and understanding between friends and strangers alike.”

Isn’t this so amazing!? We hope you are keeping your assignments beside and leaving for the festival! Assignments can be written by a substitute writer but the festival cannot be attended on your behalf!

As per the request of one of our clients, here is an example and a sample of creative writing on the topic – Vivid Sydney Festival. If you have been asked to prepare an assignment for this grand event, contact us!

How Do Students Score a High Distinction (Marking Rubric)