What Are Exclamation Point Statistics And How To Use Them Properly?

In statistics, an exclamation mark or point denotes a factorial. The question now arises, what is a factorial? A factorial is represented by the small letter n followed by a ‘!’ or simply 'n!'; it is read or pronounced as n factorial. The formal definition of n! results from multiplying or producing all the natural numbers preceding or equal to n in the number system.

Fabian Stedman, a British author (In 1677), interpreted the factorial as a ringing change. The artists would ring various tuned bells as part of the musical performance known as change ringing. A mathematician from France named Christian Kramp (in1808) managed to develop the factorial sign that we now know as n!. The subject of factorials is at the foundation of several mathematical disciplines, such as number theory, statistics, graphs, discrete probability, geometry, algebra, etc. 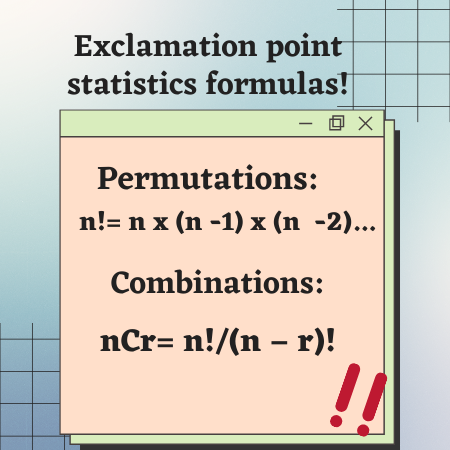 Exclamation point statistics: How To Use It Properly?

A Factorial is denoted by the exclamation mark (!). It means multiplying the respective positive number or integer with its (non-zero)predecessors in decreasing order. For example, 7! = 7 x 6 x 5 x 4 x 3 x 2 x 1 = 5040. Even though all the numbers multiplied for calculating the factorial for any number had to be non-zero, the factorial for zero or 0! It is equal to 1. The basic rule of counting defines factorial. To make this concept easier for you to understand, here are a few examples stated by our experts who provide assignment help USA.

Similarly, for the number of events, it will be m!

Here are some Applications of permutations and combinations in daily life

Permutations: An arrangement of items in the relevancy of order is called a permutation. Since the order in which things are arranged is important, the same number of objects placed in a different order will be considered various permutations.

Some real-life examples of permutations:

We learn many things regarding elections and hierarchy from elementary school to university. Since it is an event where hierarchy or order of things is of utmost importance, it's an example of a permutation. The order here is relevant on many levels for managing election representatives, voters from various states and communities, and the final ranking after the declaration of election results.

Suppose there are three students, x, Y, Z, who are elected as the Chairman, Treasurer, and Chancellor. There can only be one student; then, we can determine the number of possible committee arrangements using the multiplication principle.

When selecting a name for a product or an enterprise, a few alphabets have to be in the name of the product. Enterprises may use the manual method of arranging alphabets for all possible outcomes or use permutations since no repetition is allowed.

Also, the anagram generators online for names or other words use the same permutation principle.

If one is to arrange four alphabets in order to generate an anagram, then by using the permutation principle, there will be 4! possible permutations.

The arrangement of numbers when making a PIN code is another example where the order is the most relevant.

The PIN code 2345 is different from the PIN code 5432. Here order is important as the arrangement of the same numbers in a separate charge is considered another set of permutations.

The formula for combination:

n! = total numbers of items in the set

(n-r)! = number of chosen items from the set

Some real-life examples of combinations:

Suppose a cricket team is selected for the final match of a world cup series. All the batsmen, all-rounders are finalized; just the bowlers are left to be chosen. The best spin bowler on the team is injured due to an accident during practice and cannot play for at least two weeks.

So the team selectors and the team captain have to decide among three standby spin bowlers, but there is only one empty spot. They can use a combination formula to generate possible results:

And, of course, the best player is always chosen based on their ability and agility.

A company is to select five employees out of fifty to form a team for an upcoming project. Since each of the selected employees will hold positions in the project hasn't been finalized. Therefore, they can be chosen in any order; the same selected individuals in a different order will not be considered a different combination. This is an example of a combination; 50C5 ways to pick each employee out of 50 to form a team.

These are some real-life examples and applications to use permutations and combinations and hence, exclamation points statics in various ways. The exclamation point (!) is a small symbol in English used to convey the severity and difference of tone in a sentence. But, in mathematics, the exclamation point is highly important and can help calculate hundreds of outcomes and possibilities for a given scenario.

How to Write a Business Paper?

What Are Metaphors and How Do I Use Them?