What Are Metaphors and How Do I Use Them?

A metaphor is a tool or figure of speech that draws comparisons between unrelated things or ideas. For example: "the cities are nothing but a concrete jungle", the words' concrete jungle' is a hypothetical idea that doesn't exist in real life. Using two unrelated words together made you imagine a theory that the writer wanted to convey. A metaphor never makes a clear comparison, but two ideas or feelings are used together to paint a picture in the reader's mind. The purpose of a metaphor is to keep the reader hooked or to make them think about the idea the writer wants them to ponder.

Fill the paper with the breathings of your Heart.

Popular poet William Wordsworth wrote this popular metaphor in a letter to his wife in 1812. 'Breathings of your heart' here is a very delightful metaphor, as it conveys a feeling and makes the reader feel it as well. Of course, our hearts can't breathe; a soul is a very important organ that keeps us alive by pumping blood throughout the body. This metaphor means that you must put your heart and passion into it whatever you do. Such metaphors are the ones that convey a feeling rather than an image. 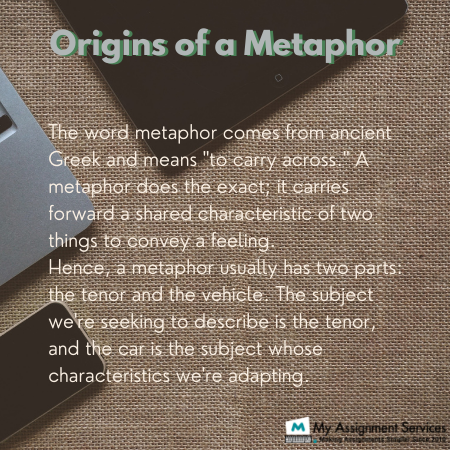 Purpose of a metaphor and its origin

The metaphor's origin dates back to the 15th century. But the actual origin of metaphor is still debated over. The metaphor used in the English language is said to have derived from the French word métaphore and previously derived from the Latin word 'metaphora', which means to carry over or extend further.

Similarly, as we observe Shakespeare's most famous lines, "All the world's a stage". 'The world' here is a stage metaphorically, in which we are actors in the stage play. Here, 'the world' is the tenor, and 'the stage' is the vehicle.

Metaphors allow us to make new connections without using comparison words such as like or as, thereby expressing more meaning—a popular figure of speech that might assist the listener in better understanding a subject. Metaphors can also reveal that something is a representation of another.

Now that we know what a metaphor is and its origin and purpose. We will now discuss the various metaphors and see some examples of each metaphor. See if you can figure out the tenor and subject of each of these metaphors.

Music to my ears.

The words, Music and ears are related and are often used together. Here, the term 'music' is used not to depict literal Music but some sound or a person's soothing words.

This task is harder than solving a math equation.

Here, we get the idea first that the writer or speaker finds math difficult and that their assigned task is difficult. As we see, the meaning of this metaphor is implied by comparing two circumstances.

She was a mind floating in an ocean of confusion.

The meaning here is clear as the writer conveys that she was feeling confused at the moment. But, the use of the figure of speech, ' mind in an ocean', depicts the gravity of her feelings.

with a fearful trill

Here. 'The caged bird' is the extended metaphor; it's used once, but as we read the lines after, we have the idea of the caged bird in our minds. 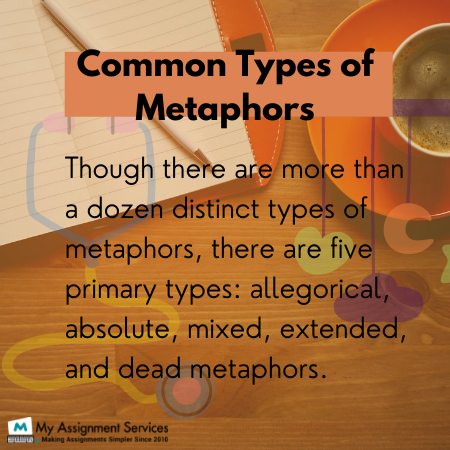 I'll walk through fire to save my life.

In these lyrics, Sia, of course, didn't actually walk on fire. She's just trying to convey her hardships as walking through fire.

"The Early bird gathers no moss and the Rolling stone catches the worm, right?"

These lines are from the popular 1988 psychological comedy-drama American films. In these lines, the speaker is using the metaphor to be sarcastic. Early bird gathers moss is a known saying; the speaker is twisting that to be ironic.

Apple of my eye, Heart of gold, and plenty of fishes in the sea.

Here, the speaker is a capitalist and regards money as important as time. Also, we can decipher the character's personality as worldly or bustling as their time is of prime importance.

People often get confused between a metaphor and a simile as both of these serve similar purposes — comparing two different things. However, metaphors are used to draw an idea of an object being something else, but a simile depicts how two things are similar. Similes use like and as to describe the similarities between two things. A metaphor can be poetic and complex, but that doesn't imply that the meaning behind the comparison has to be complicated. If anything, metaphors are used for a direct comparison that can be understood by the reader or listener easily. Now that we know what a metaphor is and how to compose various metaphors. Go ahead and use a few metaphors in your writing to get your reader's mind gears turning.

What Are Exclamation Point Statistics And How To Use Them Properly?

Get Flat 40% Off on Academic Assistance & Win Your Semester!