What Are Some Popular Literature Themes in Young Adult Novels?

We live in an era of digital devices; our vision, hearing and even our sensory perception are taken captive by our phones. Be it watching tv, working on our laptop, or using our phones; we are in a constant state of visual simulation. Whereas it is entertaining and a great source of Serotonin boost, it does not comprise much to help us. In hindsight, we are left with an emptiness and feel bored just after leaving our phones.

If you're going through something the same as well, that's low attention for you. Studies show that the concentration of an average person has decreased from 12 seconds to 8 seconds. But how to improve that? Many of you must be wondering, "but what am I supposed to do then?" The simple answer is to read books. I know it sounds even more boring. The idea is not to get you completely away from your phones but to develop new and better habits.

Reading literature novels is good for increasing your creativity as the well-spun, intricate and intriguing stories can take you on a journey. It broadens your perspective and changes your ideas on many things; reading literature teaches you about the multiple cultures and their norms. You can discover your heroes and the most important life lessons by following the stories of your favourite characters. The best and most important thing that literature reading teaches you is to discover oneself. 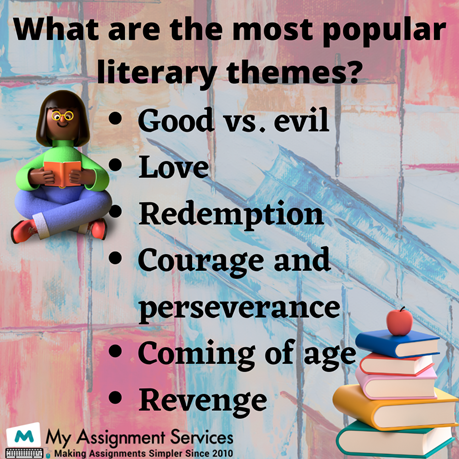 What is a Theme And Definition In Literature?

A literary theme is the main topic or the underlying idea that the author addresses through the novel. Many also know it as the "moral of the story" that the reader discovers at the novel's end. It doesn't have to be discovered at the end of the story, but it is a general theme followed throughout the plot.

It can be defined in very simple terms; in contrast to the definition, a literature theme is a central theme in a lengthy piece of writing with multiple characters, many chapters, and various other sub-themes within the plot. Often it is easier to decipher the theme from the very first chapter of the book, but for some literature pieces, the theme is upto the reader's interpretation.

There are many common themes we witness in books and movies, and often they are so common that they've turned to cliches; an epitome of such is Love. But, more than just a word, literary themes are best explored through a relatable, human-level, universal theme. Such themes are why one book is so successful (and won't be named The Fault in Our Stars) despite being considered "cliche".

I have compiled a list of a few of the common literary themes in Young-Adult fiction with examples:

Yupp! The most common, universally popular, and the most cliche theme is love. Many books have been written that are being written and are yet to be published based on love. It is the most overused and yet the most loved literary theme. Popular fiction such as Romeo and Juliet by Shakespeare, Pride and Prejudice by Jane Austen and The Notebook by Nicholas Sparks are a few of the most critically acclaimed and the best selling books ever.

But when it comes to young adults, they are more intrigued by relatable plots and have a great life lesson in them. ‘All the Bright Places’ by Jennifer Niven is one of the New York Times bestsellers and sold over 550,000 copies worldwide. The book has love as a central theme, but it also highlights the mental issues young adults face and the silver lining to it.

While fiction novels kept on evolving in the twentieth century, the new sub-genre romance fiction, initially created in the nineteenth century, began to turn out to be more famous after the First World War.

Coming of Age is a plot that is based on self-development and a document of the character's growth from childhood to adulthood. Also known as the Bildungsroman, it was originally derived from Germany. The term bildungsroman is made by joining the German word Bildung which means education, and the Roman, which translates to a novel in German. Hence it means a book of education or a novel of formation.

The story of a relatable character going through a similar situation as the reader is why the coming of age is a popular genre among young adults. Many see themselves in the shoe of the character in the book, relate to their struggles, and learn through the plot. The best example of this is The Perks of Being a Wallflower by Stephen Chbosky. This book is a coming of age story about Charlie, who learns a lot through his experiences in high school. The sub-themes in this book are love, friendship and mental health.

The Good Vs The Evil

We all have come across this one through the countless fairy tales and bedtime stories throughout our childhood. The classic battle of the light vs the dark or the righteous vs the wicked is enticing and captivating. It is a page-turner that we can't get enough of even after knowing the ending most of the time. The readers are often moved by the characters' struggles, their fight and triumph over evil.

The Harry Potter series by J.K. Rowlings is a great example of a good vs evil themed plot. Admit it, all of us are rooting for Harry through and through. Such plots teach the right and the wrong and explain the importance of such basic traits intriguingly. 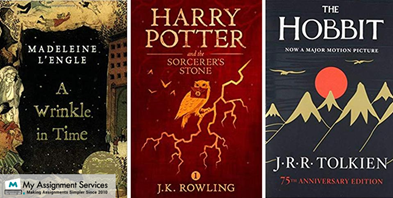 The first Harry Potter book sold 8.3 million hard copies in the initial 24 hours and over 500 million have been sold till date.

Redemption is a plot similar to the good vs evil themed ones but in the redemption themed plots; the evil is often the protagonist. The failure, downfall, struggles and the pursuit to return to the good side are popular among the younger generations. Our errors are a part of learning, and that doesn't imply a person is regarded as 'evil'. Such plots are relatable for many, even if they don't admit it, as we all have skeletons in our closets.

A Christmas Carol is a novel written by Charles Dickens is a novel that many of us, if not all of us, have read. It tells how an older adult named Ebenezer Scrooge is moved to turn from his resentful life to a loving one. The underlying theme in this novel is the important lessons in the life of loving thy neighbour, loving your family and loving life in general.

As we see, these are a few of the most revolutionary and crucial literary themes of many YA books. These themes tell us the struggles, the downfall, and the rise of our favourite character. The lessons from such stories are relatable and help us review our personal lives.

Theme Definition In Literature- How to Create Your Literature Theme?

After reading all such genre-defying plots with multidimensional characters, you must be intrigued to develop your very own literary theme. Yes, that is possible; you can create your writing style and literature theme. Follow these three steps:

The character traits, the children’s games, and the overused spooky musical theme became the very reason for the success of the series. All such symbolism became popular on the internet.

Now you know all the 123s of literary themes and how to create a theme of your own. Literary themes are the very reason for the reader's interest and attachment to a plot. The flow of the plot and the character development depend heavily on the theme. Often, the theme is not determined from the beginning of the plot but is entirely up to the reader's interpretation, making the plot even more interesting and captivating.

Literature themes are a very important part of the popular trends among young adults and make popular social media trends. You can explore through all these genres of literature themes and try making a theme of your own; maybe you can and will write the next bestseller.

How Can Managers Ensure Team Effectiveness?