What Are Specialised Cells

There are also differences between cells. Every cell has a specific function to do. Such cells have special characteristics that allow them to carry out their duties. 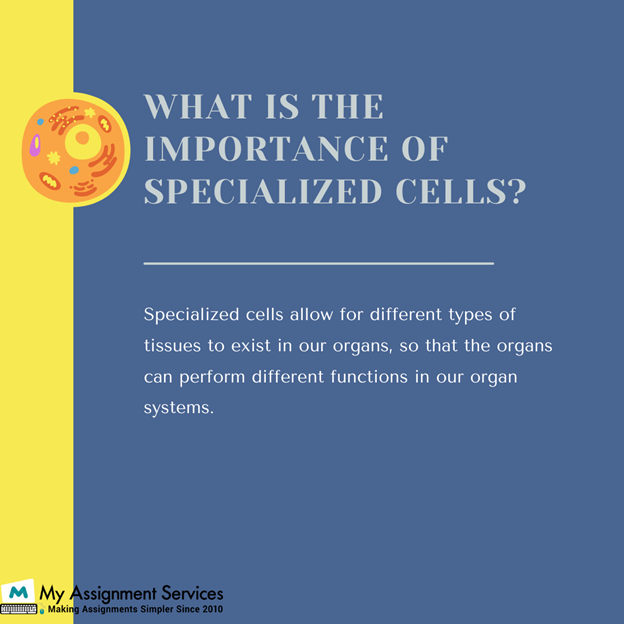 What are Specialised Cells?

Basically. a specialised cell has a unique shape or set of characteristics from which it performs a specific function in the organism.

You should be aware of the following specialised plant cells:

You should be aware of the following specialised cells in animals:

Here are some specialised cells examples and their characteristics that let them do their function:

These cells carry oxygen throughout the body. They're ideal for this job because they're able to:

Haemoglobin binds to oxygen and creates oxyhaemoglobin in bodily areas with high oxygen concentrations (such as the lungs).

The term "oxygenated blood" refers to blood that has a high concentration of oxygen. 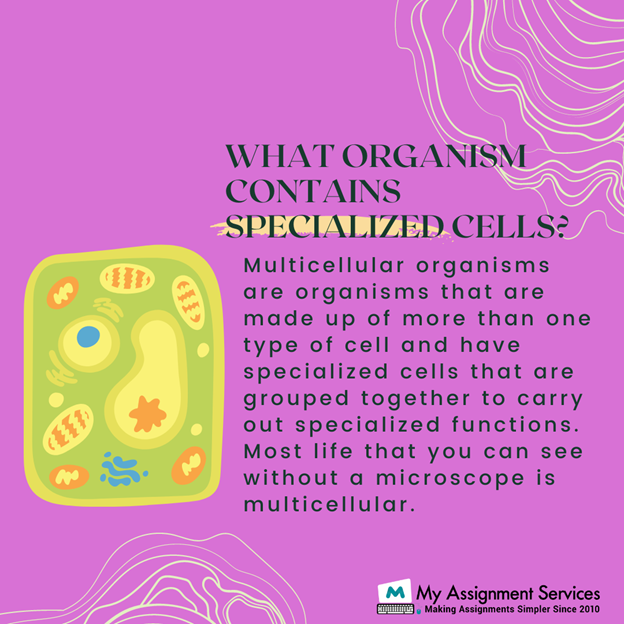 These cells transmit electrical signals. They are a perfect fit with the purpose as:

As a result, these cells are very mobile because they can stay in one spot and perform their essential duties. They wouldn't be able to respond and treat the infection properly otherwise. They make use of their tremendous mobility for two interconnected reasons. They must first migrate in order to locate the bacteria. However, once they've discovered the microorganisms, they don't stop moving. They frequently have to break through capillary barriers in order to reach diseased locations.

Leukocyte cells are unique in that they may modify their forms on a regular basis and be extremely migratory. This property is also necessary for leukocyte cells to carry out their duties.

These cells connect different areas of the body. They are ideal for this job because they're able to:

Muscle cells come in a variety of shapes and sizes, each well suited to its function:

Human reproduction requires specialised sperm cells. The nucleus makes up the majority of these cells. In contrast to certain stationary cells, such cells are very mobile because they should move to find an egg to fertilise it. The energy required for specialised cells of this sort to move at such fast speeds is provided by the mitochondria within the sperm cell.

Sperm cells are unique in that they only serve one purpose in the body, which is to fertilise the female gamete (egg). Consequently, it has characteristics that are not found in typical body cells. The nucleus, which is home to the genetic material, is found in the sperm cell’s head. Sperm cells contain a tail that helps them swim and fertilise the eggs. They're also densely packed with mitochondria, which provide movement-related energy, for example, in swimming. The female egg is broken down by the enzymes that further allow the sperm to enter.

Cell Differentiation You Should Know

Bacteria and protists, for example, are single-celled organisms; plants, mammals, and fungi, on the other hand, are multicellular. Unicellular creatures, such as bacteria may carry out all of life's processes in a single cell. They can move chemicals, process food, and reproduce all within a single cell.

Multicellular organisms require a variety of cell types to perform the same basic functions. Each of these unique cell types has a unique structure that aids in the performance of a given function. Humans contain many distinct types of cells, each with a specific function, such as blood cells that transport oxygen and nerve cells that transfer information throughout the body. The process by which cells become specialised in order to execute diverse functions is known as cell differentiation.

Multicellular creatures start out as single fertilised egg cells. The regulation of DNA and RNA allows a single cell to grow into trillions of specialised cells that each execute a different job.

What Mechanisms Do Cells Use to Track Their Progress Through the Cell Cycle?

In order to progress via various stages of its life cycle, a cell passes through multiple checkpoints. Specialized proteins identify whether the necessary conditions exist at every checkpoint. If that’s the case, the cell is prepared to go further to the next stage. The cell cycle will come to an end if this does not happen. Errors in these checkpoints can have dangerous consequences, like induction of apoptosis or cancer growth that is out of control.

There are checkpoints at each stage of the cell cycle. The cell, for instance, goes via a critical checkpoint during G1 to make sure that the environment where the signals from other cells is well-suited for replication. The cell goes into a dormant state known as G0 if the conditions are not right. Some cells persist in G0 for the duration of the organism wherein they reside. Skeletal muscle cells and neurons in mammals, for example, are often in G0.

Another key checkpoint occurs when a cell moves from G2 to mitosis further in the cell cycle. A multitude of proteins examines the DNA of the cell to guarantee that it is structurally fine and copied perfectly. The cell may take a moment at this point if necessary to enable DNA repair.

The other crucial cell cycle checkpoint happens halfway through mitosis. This examination identifies if the chromosomes of a cell are adequately connected to the spindle or you can say microtubule network that separates them during cell division. This stage reduces the chances that the ensuing daughter cells may have aneuploidy or an imbalanced number of chromosomes.

What Methods Do Scientists Use to Study the Cell Cycle?

The cell cycle and its checkpoint control system have a long evolutionary history. As a result, all eukaryotes go through the same four phases and crucial checkpoints, from single-celled yeast to complex multicellular mammals. Because of the cell cycle's universality and checkpoint controls, scientists may learn more about cell division in eukaryotes of all types, including humans, using very basic model organisms. In fact, yeast was used as the subject of two of the three Nobel Prize winners for cell cycle research.

Are you drained by the prospect of working on a difficult science assignment? Are you having trouble grasping particularly difficult concepts in this discipline? Don't be concerned. Let My Assignment Services assist you with that. You can avail our science assignment help from the best science mentors. They will guide you about how to make things fall into place.

Get flawless assignment help sessions from our end, where we will support you with the notions of specialised cells and also assist you with the study of DNA and genetics. So, hurry up and book your session now.

Learn How To Formulate Astute Research Questions With Ease