What Is the Greenhouse Effect?

You are not looking for the answer to this question here because I know you trust Wikipedia more than me. The greenhouse effect is actually a good thing though.

What? Your teacher said that it is bad for the environment? No.

The greenhouse effect is, no wait, was actually a good thing for the environment until we decided to become savage and surround ourselves with machines.

The world of iron and steel that we have built around us, is actually the reason why the greenhouse effect went from being the good guy to a supervillain. It's like when Harvey Dent became Two-face.

What Is the Greenhouse Effect – In A New Style

I am sure you have read all the conventional definitions of the greenhouse effect, have probably memorised it all in your mind by now word for word. But you cannot write those same few lines over and over again in the examination, can you?

Also, you cannot explain whatever you know in the most idiotic way the teacher has ever read. So, what do you do? You explain this thing like I am explaining it to you.

Have you ever parked your car in the sun and a hours later it seems that the world’s largest forge was installed inside your car? How do you think all that heat accumulated there? And there was nobody there to make the atmosphere hot and steamy. The heat from the sun entered the car and was trapped inside.

That’s how our earth also functions. Did you hear about the ozone layer which is now deteriorating? Yes, that one. So, our earth is the car and this ozone layer is a window of the car. The heat from the sun comes in and gets trapped in there.

See the greenhouse effect diagram below – 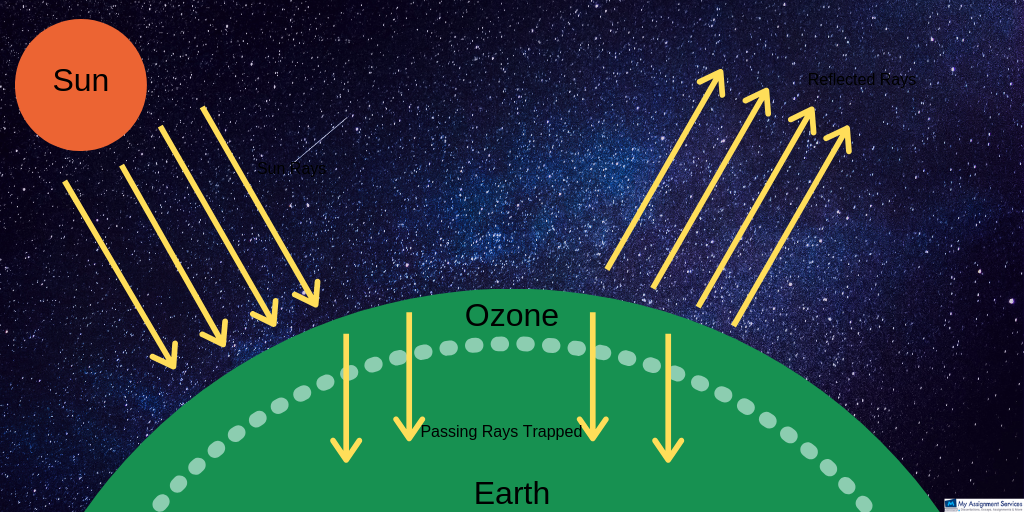 Why is it called a greenhouse effect?

This is because there is something called greenhouses. It is a large hall with glass windows and has plants. In cold countries where there is not too bright sunlight, these glass buildings trap the sunlight so that the plants get adequate heat to survive.

How Did It Become A Problem?

That is an excellent question. How did the greenhouse effect become one of the major environmental issues of the modern world? How did it come to this that we are doing all we can to curb the very thing that is needed to stay alive?

See, it was not always like this. Earth used to be a happy little kid and the people used to take care of it. The sun used to shed its light, ozone layer happily sent few lights back into the void of the universe and allowed a couple of them to pass through. These accumulated into earth’s environment and kept it warm, essential for humans.

Then one day, some evil bullies decided that they wanted to do more. They made monsters of iron and steel and set them loose. People learnt to tame these beasts and enjoyed them. Slowly and steadily, these beasts were releasing toxic gases that were hurting ozone. Over the years, the effect became so rough that ozone gave up. It started dying. The bad sun rays that were sent back were now forcefully entering the atmosphere.

Yes, you are sitting by the beach having a cold one and the oceans will start boiling and then vanish. Wooosh. It is believed that Venus had a life too but they all died because of a runaway greenhouse effect when all their water boiled and they were left thirsty until they died.

Sounds so cruel. Ah, don’t worry. The scientists say that such a thing cannot happen on earth. At least not by what we are doing to the earth (until now). But who knows when the trend might change, eh?

What Are World Leaders Doing for Greenhouse Effect?

The world nations are pretty serious about the environmental issues and many countries signed the United Nations Framework Convention on Climate Change. It is an international environment treaty. After the Earth Summit in June 1992, the treaty entered into force by March 1994.

There are 165 signatory countries of this treaty at present. The objective of the UNFCCC is to “stabilise the greenhouse gas concentrations in the atmosphere at a level that would prevent dangerous anthropogenic interference with the climate system.”

How Do We Know That Air Was Actually Good In The Past, Like A Couple Hundred Years Ago?

I used to think that as well when I was a kid. Isn’t it worth questioning? Like, who comes to the future a few hundred years later and tell us that the air now has degraded a lot from the time they were alive.

Well, this doesn’t work like that. The credits for the air analysis for greenhouse effect go to Antarctica. That’s right. what do you NASA does there with a couple scientists, a traveller and satellite equipment? Except spying on the world and working with snow animals?

They are analysing the air from the past!

See, when snow falls over each other, the air gets trapped. This air bubble is reserved for thousands of years as well. This is where scientists get the air from the past and analyse the same for the greenhouse effect.

Do You Have An Assignment On Greenhouse Effect?

Any doubt or query, the experts at My Assignment Services are there to help you out. Ask me anything related to the greenhouse effect for your assignments and I promise to help you out. What? You want an assignment done on the greenhouse effect, as quickly as possible? Of course, I will help you. You can send me the details over the email or fill the form here quick.