Dramatic Irony (Literary Device): What It Is and How Beneficial Is It?

In literature, dramatic irony is a literary device in which a situation or a character's state of mind is revealed to the audience but not to the other characters. The reader knows what each character should know and thus sees their mistakes as amusing or pitiable. It also adds depth by allowing readers to discern the persona of characters who remain unaware of their own flaws, misjudgments, and misunderstandings. In many cases, it becomes necessary for readers to keep from disclosing important information, known only to themselves and one additional character, until that point at which another character finally realizes its significance. This technique increases tension between characters and leads up to pivotal moments. 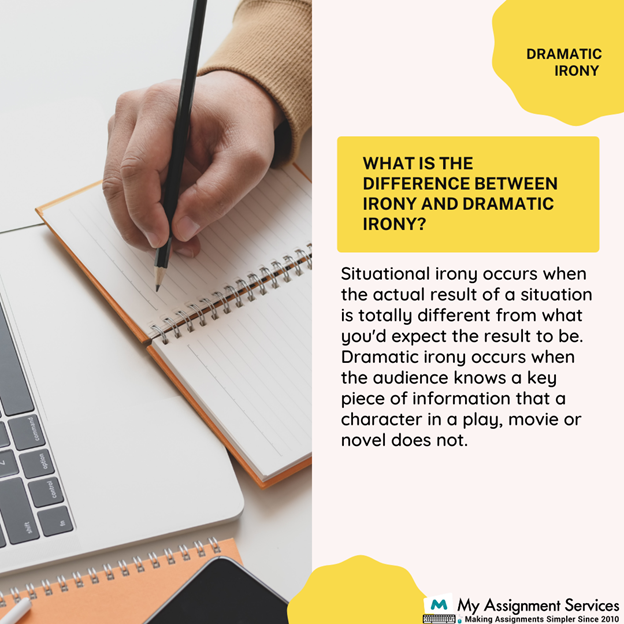 The effects of dramatic irony are usually achieved when a minor character suggests something to the other characters. Still, it is clear from the dialogue that the audience knows this certain suggestion won't be helpful.

For example: "This place is a maze – why don't we split up and meet back here in 30 minutes?" said Bob. "That's a great idea!" replied Alice, " I bet we can search a lot faster if we go alone." The audience, of course, knows that splitting up is not such a good idea because there might be even more danger lurking somewhere. This use of dramatic irony makes the reader feel superior to the characters because they know something which they do not know.

In another example, Jane says, "Hey! We should make our way down to those old tombs. I'm sure there are plenty of places to take shelter down there."

Tom replies, "Let's go!" The audience knows Jane means the tombs are not safe because they are haunted, but Tom is oblivious. He follows Alice's suggestion, not knowing it would put him in grave danger. That makes the reader feel smart for picking up on the clues while Tom is unaware that he is walking into a trap.

What about another example? This time let us substitute 'audience' with 'Mike': Mike sees Sam sitting in his chair and thinks it is very strange. Sam looks like he just got back from his walk through town and has bloodstains on his clothes. At this point, the dramatic irony sets in when suddenly Sam says, " I totally just got into a fight, and this is my blood. This man tried to mug me, and I had no choice but to beat him up." The reader knows that Sam was not involved in a fight at all. He killed an older woman for her money, which Mike can only assume. The reader knows the truth about what happened, and this clarifies that dramatic irony is a very special literary device that lets you enjoy literature in many ways.

Dramatic Irony Can Be Used to:

Dramatic irony also becomes essential in illustrating that fundamental differences may exist between what is expected, what is meant to happen, and what actually happens. The results of dramatic irony are not always tragic since it could result in comic situations. For example, Mike sees something suspicious about Sam's behaviour, so he decides to follow him around town. As readers, we know that if Mike were not so nosy about his business, he wouldn't have been found in a potentially dangerous situation by being out at night. It was Sam's fault for being out late at night, but it was Mike who was punished for listening to his inner voice of curiosity by getting involved in something bigger than himself.

Dramatic irony also shows how people of different social classes might interpret the same situation differently due to differences in life experience and expectations. This is demonstrated when Tom mentions that he had heard stories about ghosts of ancient tombs before this happened. He says, "They say if you stay here long enough, you'll see one." Alice replies, "But it's not safe to be hanging around old graveyards like that!" At this point, the purpose of dramatic irony sets in because we know that supernatural beings live there (and they are waiting for Tom to get lost in order to kill him.)

Let's take a look at our last example. It is defined as a situation where the audience knows something that one or more of the characters does not know, but it is a fact that they could reasonably determine. An example would be if Mike tells Sam he has a surprise planned for his birthday and then doesn't tell us what it is until days later when we see him buying party supplies. The reader knows from page 1 what the present will be, but Sam isn't informed until later, which makes dramatic irony thrilling since we want to know how he'll react once he finds out!

This definition was found on Google dictionary: "Dramatic irony is a literary technique in which the spectator or reader is aware of some fact that one or more of the characters are not." 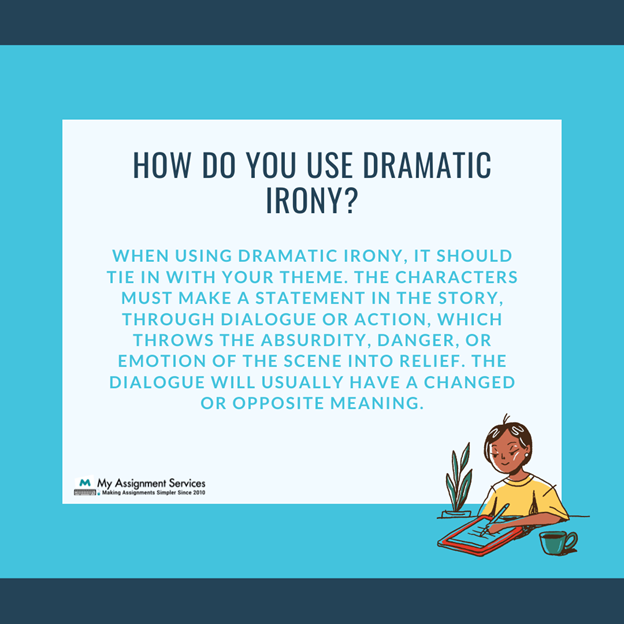 Here's another example taken from Charles Dickens' Great Expectations. "I had never parted with my boyish fantasy that everything in the world had its parallel somewhere. I don't think I have ever contracted anybody else's point of view, of course. But it seemed to me that when I stood outside the church and saw these people coming in at the gate, if I had dropped out of the sky amongst them, I should have thought; There must be something going on inside here." This is an example of dramatic irony because, by this time, Pip has spent his life savings on the play of the girl he saw in his dreams and thinks she must be inside. But we as readers know she isn't, and the truth will soon come out.

One common use of dramatic irony is to make a statement about human nature through an ironic situation. To illustrate, take the first example from our list: "We laugh at what we fear." We laugh because we can tell it's fake, and if someone were actually shooting live bullets into a crowd, then maybe we would be more afraid than laughing. Another good quote that demonstrates this idea comes from Pride & Prejudice by Jane Austen: "Oh! My dear Mr Darcy. I have been quite distracted since you left me this morning. It has been on my mind so much. But never mind that now. Let us talk only of you..." We laugh because we know Jane is upset, but Mr Darcy has no clue, and she doesn't want him to find out.

The last example goes back to our definition of situational irony. We can tell that things will end up badly for her "I'm Elizabeth Bennet, the most charming young lady you've ever encountered." This quote comes from Pride & Prejudice: Elizabeth's younger sister has just made a big faux pas while meeting the highly esteemed Mr Darcy (and he hasn't even taken notice). The real hilarity sets in when we realize that she approaches people with such enthusiasm and confidence all the time - which is why her family gave her the nickname "Lizzy." It's ironic to see how wrong people can be about other people.

Summing Up the Blog

A dramatic irony is a powerful tool for adding suspense and excitement to any story. There are many variations of the term, but it will always be an essential concept in writing because it makes the reader feel like they are reading something fresh and new. It allows writers to make their readers look at things from a different perspective, ask questions about what they've read, and anticipate better things to come in the future. With the help of the best assignment provider through interactive and live sessions, you can access experienced experts who can assist you tackle the problems with dramatic irony. Don't wait to book your 1:1 session now.

R vs Stata: What Do You Need to Choose for Data Science?