Just as Cancer, Alzheimer can happen to absolutely anyone.

It’s been almost a century since Alzheimer was first discovered in 1901 and yet researchers around the world are still understanding this disease. 50 million people are living with dementia. According to the reports by the World Health Organisation, this figure will triple by 2050. The highest number of cases of Alzheimer’s diagnosis reported are in China, India, and their South-Asian neighbours.

Another challenge is that only 2 out of 3 people have little to no understanding of the disease. In the light of these ever-growing concerns, World Alzheimer’s Month is observed across nations. It is that time of the year where the focus is on recognising the impact of dementia, raising awareness, and finding solutions to challenge the stigma that surrounds this disease. The campaign was launched on 21st September 2012, and this year marks the 9th World Alzheimer’s Month. Over time, it triggered several actions but the concerns related to stigma and misinformation remain unresolved. 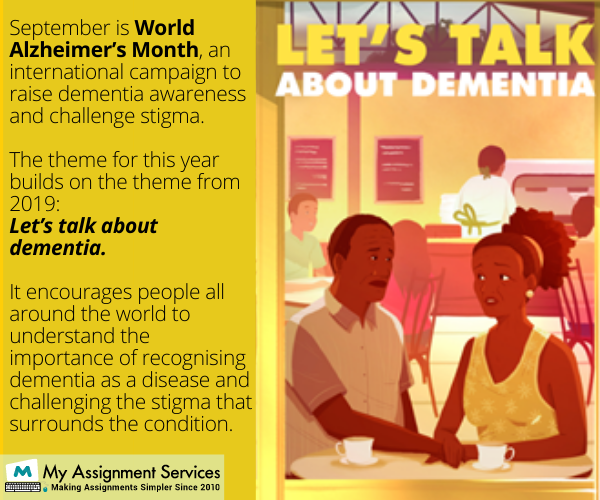 Alzheimer Disease International declared the theme for 2020 which builds from the previous year’s theme. Let’s talk about dementia is a back to basics approach that focuses on starting a conversation on dementia and becoming more aware of its impact and global challenge. The primary objective of World Alzheimer’s month is to promote an awareness-raising message across as many borders as possible and encouraging the general public to show their support to individuals living with the disease.

September is World Alzheimer’s Month; the time to take action. Alzheimer associations and supporters around the world taking part in this campaign unite and organise various events such as Memory Walks as well as other fundraising events.

Many people have a lack of knowledge about dementia which leads to negative attitudes and incorrect assumptions around the disease. Talking about dementia lets people gain a better understanding of the disease. If they are curious or have questions, they will research or seek advice from professionals in primary care. When this happens, one of the objectives of the World Alzheimer’s Day campaign is accomplished.

Findings of the World’s Largest Survey on Alzheimer’s Disease 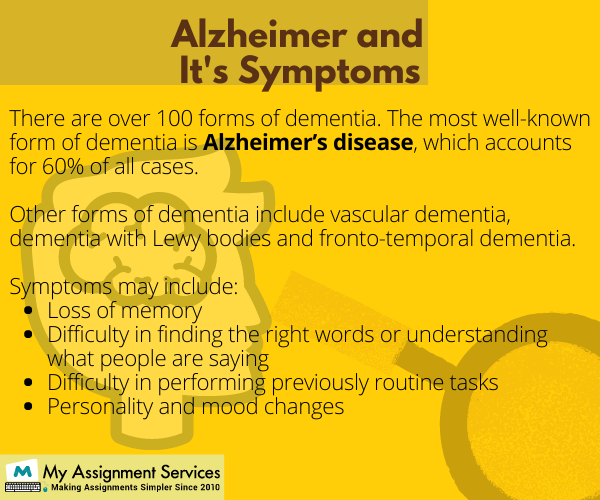 Almost 90% of all dementia cases reveal that the patient has grown Alzheimer’s disease. Yes, it is one of the common types of progressive degenerative brain syndromes collectively called as ‘Dementia’. The individual experience a significant reduction in memory and the

ability to perform day-to-day activities. Now imagine forgetting your car keys in the refrigerator. That’s what dementia does to your brain.

Each year, Alzheimer Disease International conducts an online/offline survey on dementia. In addition to the survey, it analyses essays and case studies written by experts around the world. These include valuable recommendations for improving the conditions of Alzheimer’s patients. 70000 people from 150+ countries participated in the survey held in 2019. The results were analysed spanning four demographic groups that comprise the general public, healthcare providers, caregivers, and individuals living with Alzheimer’s diseases.

Here are some of the key findings:

Any piece of dementia research is motivated by the belief that unrestricted access to support and health services should be given to individuals with dementia. Recommendations also add to creating a framework to take necessary actions on the disease.

Dementia at a Glance: One New Case Every Third Second

The health care sector has improved since research on Alzheimer’s disease first started in the late 1900s. Today, there is a significantly larger proportion of people living a healthier and longer life than it is was a decade ago. One can find better and efficient cures to diseases and ailments. The Government, policy-makers, and health agencies also have upgraded their facilities to meet the demand for better healthcare experiences. Such improvements lead to an increased proportion of older people in the world population.

More than 10 million new cases are reported each year, which translates to a new case every third second.

So what is this cost that we are talking about?

Costs related to diseases attribute to direct cost of social care provided by professionals engaged in community care; social care expenses occurred over the treatment of dementia in primary health care, and unprofessional or informal care provided by the family. In many regions in Africa and South America, the relative proportion of direct informal care costs is greater due to the lack of primary health care facilities that support treatments for the disease.

The annual cost of Dementia exceeds the net worth value of some of the most valuable companies in the world such as Facebook (USD 584 billion) and Alibaba (USD 545 billion).

With support from associations, organisations, the Government, and the public, the campaign presents a consistent message about Alzheimer around the world. The Covid-19 pandemic highlighted the importance of providing healthcare services to people such as those living with chronic conditions. Moreover, the Government imposed lockdown and restrictions across all nations but it was also essential that during the same time, we do not socially exclude them. World Alzheimer’s Day insists that people keep talking about dementia not only amongst themselves but also with the caregivers and healthcare practitioners. This will also help tackle the stigma and fear surrounding dementia.

BEST COURSES IN FOOD AND BEVERAGE MANAGEMENT IN AUSTRALIA 2020

The rising need for uniformity in global intellectual property law