Did you ever have to fight for your Right to Vote? Or, Equal Pay? Or perhaps, for the Right to be on your own? Well, women did. From the late 1800s to the present day, lies the story of a magnificent past that shook and shattered the world’s entire social, political, and economic paradigm born out of deep-seated gender inequality, women’s oppression, violence, and patriarchy.

So basically, women jailbroke the exploitative system that necessitated them to remain a property of men. They uprooted the regimes that offered them absolutely zero rights of existing. They obliterated the framework that was the reason for their systematic persecution.

This on-the-ground vindication process was accompanied by theoretical development of the feminist literature, that equally contributed to the struggle and the success of the feminist movement. It helped understand the collective action in a way more profound and insightful. As a repercussion of which, more excursions were made into the subject, and in essence, into capturing the difference in realities of women upon a change in spatial context, which later came to be known/termed as the Feminist geography. 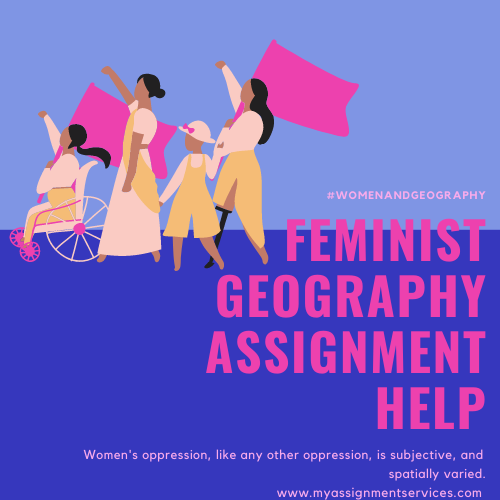 Outlining the Intricacies of Feminist Geography

Although, Feminist Geography is a part of the broader discipline of human geography, that utilizes the premises, techniques, and exegesis of feminism to the discourse of the society, the human environment, geography, and perhaps anthropology to some extent; it has grown in to a much bigger and sufficiently standalone subject. Feminist geography only developed in the forth-quarter of the 20th century, after constant efforts and demands of the women's movements calling on the academe to incorporate women as both the creators and subjects of research. Long story short, the Feminist geographers’ intent was to coalesce the status of race, class, and sexuality into the study of geography in order to clock a greater accuracy at understanding the ins and outs of women’s plight varied by distance.

In other words, geography of women probes into the influences geological factors have on gender inequality. Feminist geography, is uncontestedly inspired by welfare geography, as well as the liberal feminism. Feminist geographers stress on the innumerable gendered inhibitions posed by distance and spatial separation. For example, considerations relating to the spatial attributes can perform a significant role in constraining women to specific locations or socio-cultural spheres. Some of the scholars of Feminist geography, namely, Henry Rogers Seager and Louise Johnson, discovered gender to be a ‘narrow-minded’ perspective in comprehending women’s oppression based in the colonial times. Given which, fathoming the intricacies of the geography of women necessitates to have both, a critical strategy, and exploration of the varied dimensions of age, ethnicity, class, interest, and other probable socio-economic aspects.

The Objections and the Controversies to Feminist Geography

One of the prompt demurs to the idea of feminist geography, or the geography of women, proposed that gender based roles were majorly described via gender inequality. In response, scholars have argued that the meaning of gender role emanates from an unchanging social theory that tunes the focus to women and represents them as the victims, which, in essence, provides a rather less accurate understanding of the spatial gap. As opposed to which, the scholars have asserted that the idea of the geography of women is capable of manifesting how the spatial impediments and separation takes a dive into the formation of women's positions at a given setting. In the year 2004, Feminist geography was critiqued to have been in a context where the actions on gendered practices, basically of portrayal, were shaped and structured through popular ideological convictions. In a response to the same, feminist geographers have also asserted that faulty representations of gender roles and under-emphasized feminist movements unveils that the obstacles of the colonial era lie with the incarceration of women to finite geographical opportunities. Hence, the feminist geography is instituted on the principle that gender should be applied and developed with regard to spatial attributes.

The Benefits of My Assignment Services

My Assignment Services offers the best online Feminist geography assignment help in Australia, UK, and Canada. Hundreds of students everyday, across the various renowned Australian universities offering the subject and associated gender studies, have been seeking My Assignment Services’ help in not only securing exceptionally good grades, but also accessing a way more thorough understanding of the subject they just could not have by themselves. And it is only logical to seek professional help. This not only shifts the burden from you, and saves you of the unnecessary hard work that only those with 24 hours of the day to exhaust can do. Even in the cases of students dedicatedly working 24/7 on the projects, for the obvious reasons, they can not produce what a retired government policy-maker, analysts, and working professors in the other parts of the world could create for you. The professionals partnered with us, have undoubtedly been delivering some ‘heavy-duty’ work on Feminist geography assignments to our students. We have certainly been able to set the standard very high for students looking for Feminist geography assignment writing service.

However, in case you are yet not able to figure out, whether you should go for My Assignment Services or not; or if you are uncertain with the quality, depth, language, style, or originality of the research, we suggest you to reach out to us immediately. It is because we will be writing the first 500 words of your Feminist geography assignment, absolutely free of cost. The motive here is to apprise you of the sheer high quality of our assignments, those which are also ought to be so since they go through multiple layers of quality checks. We also have a dedicated and steadfast team of language experts who are seasoned enough to keep the level of checks on originality, and quality of the assignments at ‘Rigorous’, always.

So, is there any other reason for a delay? If not, get in touch right away!