Just like any other discipline of IT domain, Networking also plays a huge role in making the IT work. Networking is considered as one of the most complex disciplines of IT field although students face many impediments in preparing networking assignments they hardly find any source form where they can get proper assistance. To aid students with such networking problems, My Assignment Services provides network topology assignment help at which any student who is weak in networking concepts can get top-notch networking assignments as well as proper guidance of networking experts without putting much effort.

All the networking systems work on the basis of which network topology is used and how. It defines the layout of a network and also explains how many ways different nodes are attached or interconnected with each other. Basically, network topology demonstrates how the data is transferred or interchanged among various nodes. To understand this subject matter in-depth, let’s have a look at how our network topology assignment help experts elaborate each topic with in-depth clarity through guided sessions.

To become an expert in any discipline, you must be aware of the basics of that discipline. So our assignment help experts demonstrate every topic through guided sessions with clarity and also mention the phases at which students face problems very often.

A network topology is always picked under various deliberations as it impacts the media that is used and the method of accessing. The elements to be contemplated incorporate the cost of the networking topology chosen, facileness of installation and troubleshooting and of course how scalable and reliable it will be in the future.

There are various networking topologies explained in the easiest ways by our network topology assignment expert.

In bus topology, a single cable is used to which all the nodes are attached. There’s one computer system that apparently acts as a server for every other system of that network. Additionally, it also includes a terminator which absorbs the signals as they reach at the end point of the cable and prevents them from bouncing back which may cause major network errors.

According to our experts – Bus topology is best suited for small organizations because the cable requirements are comparatively less which eventually lowers the cost of installation and it’s facile to connect the computer systems to the main cable, sometimes also called as the backbone.

The only problem is that if anything goes wrong with the main cable, the whole setup will go down. This is why we can’t use bus topologies for bigger organizations.

Our networking assignment help experts elaborate star topology as a system in which all the nodes are discretely linked to a hub/switch which is considered as a central connection point. If one system transfers some data to another system, it passes through the hub which is responsible for controlling all the networking activities. The hub is generally a fast, self-sufficient system that routes the traffic to other nodes.

Our network topology assignment services’ team explains that the primary advantage of using star topology is that if any of the connected system malfunctions, then it won’t affect any other system and the rest of the setup will be working without any problem, but here also if the hub encounters any problem then the whole system will go down. Moreover, it is a little bit expensive than linear bus topology but at the same time more reliable also. So the organizations that are still growing can opt for star topology this is what our network topology assignment expert suggests.

In mesh topology, there’s nothing such as a hub, switch or any central point to transfer the data from one node to another. All the network nodes are discretely linked with every other node and are capable of communicating independently. Our network topology assignment experts suggest that established organizations may rely on mesh topology as it can handle high amounts of traffic because a number of devices can transfer data concurrently and malfunctioning in one device will not disturb the functioning of other devices as well..

Our experts of network topology assignment help through guided sessions explain tree topology as a combination of bus and star topologies. It includes classes of start-configured workstations linked to a linear bus backbone cable which consists of terminators at both of the ends to prevent the signals from bouncing back when they reach the ends. According to our assignment experts, its hierarchical nature makes it the best choice for an organization for the aim of isolation and prioritizing communications from various computers. Here also the only problem that our experts of networking assignment help notice is that if the main cable breaks down, the whole system will be shut.

As the name suggests, Hybrid topology is the combination of two or more different topologies. Our network topology assignment services’ team explains that in hybrid topology, two or more different topologies are integrated to form a resultant topology which basically can be implemented in situations where a single topology won’t work so well. It is formed when different purposes are needed to be accomplished efficiently. Our network topology assignment help experts believe that hybrid topologies are more reliable, scalable, flexible as well as effective. 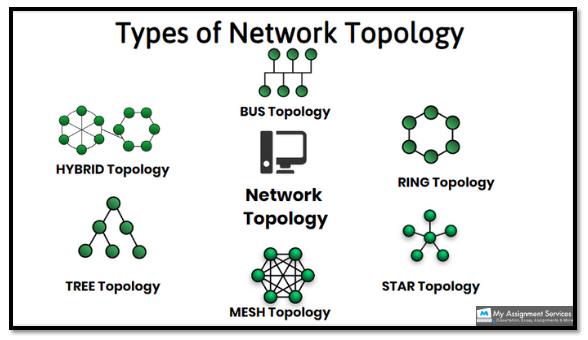 We have been assisting students for a decade and we are familiar with entire technical problems that students encounter while crafting any assignment related to the domain of Information Technology. Our assignment help experts craft every assignment as per the guidelines proposed by the Universities. We have successfully delivered hundreds of networking assignments and 97% of them scored good grades! The most important reason for choosing us is that we don’t only deliver your assignment on time, but we also strive to make you understand the subject matter through various means. Let’s have a look at the list of services you additionally get from us without spending a penny.