The circuit aims at the design of the digital circuit which will be applicable for car velocity and acceleration maintenance. In this circuit, there are different component and two significant part of operations. The complete circuit is constructed through Logisim (Ichsan & Kurniawan, 2017). Those are discussed below.

In this part of the circuit, two inputs are available namely Velocity and Acceleration. Both two has eight states and those are 0-7 meaning V0-7 and A0-7. The circuit will be operable concerning the combination of inputs.

The circuit has the following integrated parts:

The Comparator is by taking the outputs of two Counter (3-bit) and compare for the outcome that is count. When the count of the unsuccessful record will be greater than the successful count, it sent “1” to the counter “0” port and disable it. This the circuit will be deactivated or locked (Borodzhieva & Manoilov, 2018).

In this section, the circuit diagram is shown for two parts.

The circuit for part-A is as follows:

The circuit for part-B is as follows: 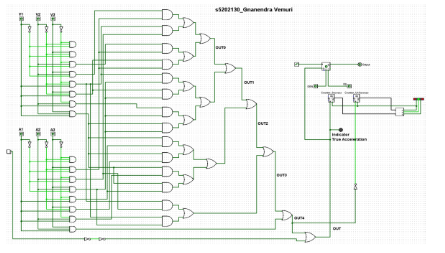 After that the circuit statistics is obtained as follows:

As the circuit contains Velocity and Acceleration as the input and it also contains the output ports, the truth table of the circuit is as follows:

References for Computer Systems And Networks