Risk factors and Pathophysiology that have led to the presenting patient

Nursing is a profession of great responsibility. A critical companionship policy coupled with critical thinking is the prerequisites of a good nurse. A complete vigilance of the situation and the correct guidelines of the doctor need to be carefully adhered to under any nursing profession. Time constraints in special cases along with correct decisions during emergencies is the potential of a good nurse. Nurses also need to follow a nondiscrimination policy regarding the social and economic conditions of the patient or whether the nature of the disease is contagious or non-contagious. During the shift changes, a nurse must carefully analyze the history and case study of the patient before proceeding with the actions implemented upon the patient. A careful vigilance and compassionate support enable a speedy recovery of the patient. ( Anderson & Roberts, 2019)

Risk factors and Pathophysiology that have led to the presenting patient

Aged patients in recent years often suffer from the problems of osteoarthritis. The major symptoms include joint pains in the knee, fingers, hip, shoulder joints, and elbow joints. The disease is characterized by the focal loss of cartilage tissue in the affected area.

In the case discussed here, the patient suffers from acute pain of the right knee.

John Grant is a 63-year-old man and his disease is, therefore, more prone to the risk zone of the ailment. (Palmieri-Smith et al, 2017)

Pathophysiology refers to the condition of the normal joint bones in human beings where there is minimum friction during movement and does not wear out in an accident.

In a normal person, the joint cartilage is composed of matrix or fluid composed of collagen, protein and chondrocytes in the percentages of 80, 18 and 1-2 % respectively. There is a balance between matrix and enzymatic conditions which are distorted when the patient suffers from osteoarthritis. Due to the imbalance, the cartilage tissue suffers from degradation and unable to bear the bodyweight of the associated bones and causes trauma and pain.

John suffers from rotational problems of the knee joints and articular cartilage injuries post knee replacement surgery. He also suffers from meniscectomy, failed and ruptured ACLR and unstable cartilage residual tissue. He has a drowsiness symptom throughout the day but is generally aroused when called a few numbers of times. His knee pain is continuous and measured at a rate of 7/10. John is diagnosed with a blood pressure of 145/70 and a body temperature of 35.9 degrees. The hemoglobin count of the patient is important. John has recorded the HR count of 105 bpm post his surgical treatment. The nurse needs to keep the doctor informed regarding this and provide the medicines that have been suggested according to the schedule. The nurse needs to keep the doctor informed about the blood pressure of the patient and provide him regular medicines on this behalf as well.

John is not able to walk at all just after surgery. The reasons are manifold. The operation needs complete rest and absolutely no movement of muscle joints at the knee at least for 20 days. John will also face consistent pain in the affected area due to weak cartilage tissue freshly attached to the muscle bones. Hence there is no scenario that he would be able to walk an inch till the washroom for urinating. He cannot be prescribed excessive pain killers to bear the trauma as it would affect his digestive system. Therefore he has been prescribed a urinary catheter in situ with 60mL of urine output.

John is 63 years old and aged people like this need to follow a strict protocol of vigilance. These patients find difficulty in breathing during and post-surgery. There is an electrocardiogram attached to measure the rate of the heartbeat of the patient. The doctor has prescribed John to be in SpO2 99% on 8 liters of oxygen via a Hudson mask. The nurse has to carefully monitor the oxygen level and the heartbeat of the patient and note the readings in periodic intervals for further reference in the future.

He was also oozing out little blood from the surgical area, so a proper dressing was done once again for the patient.

The symptom of pulmonary embolism is also known as deep vein thrombosis. Aged patients are more susceptible to the symptoms. Complications occur during post-surgery when a clot develops in the vein and travels during the entire circulatory route. The clot reached a blood vessel causing a blockage for the normal flow of blood. This condition is known as Embolism. Most often, embolism occurs in the lung. Pulmonary embolism is threatening and happens at a later stage post-surgery. (Qin & Barbour, 2017)

During pulmonary embolism of the patient, he generally suffers from shortness of breath and profound sweating. The patient suffers pain in the wounded area. The patient may show coughing of blood in certain cases. The disease leads to hemodynamic instability of the patient. The disease also leads to extra excretion of protein in the urine and the urination may become a painful event for the patient even while he wears a catheter. Pulmonary embolism if not treated with emergency and intensive care may lead to the following symptoms:-

Respiratory distress for a long run

Massive ( which is fatal )

The patient complains of painful ejaculation of urine and the nurse needs to immediately diagnose the urine sample. Upon screened reports of protein content, urine color and other factors of the renal vein the pathological tests decide whether the patient is suffering from a pulmonary embolism. The nurse also needs to identify if the concerned patient here John has any infection in the left renal vein. If the tests respond to any such infection, the nurse needs to immediately report this to the doctor concerned. The nurse also needs to identify the results mentioned in the pathological tests and needs to report to the concerned doctor about the pulmonary embolism syndrome of the patient. The patient is also advised to give periodic ultrasound radiological soothing heat treatments and the nurse needs to ensure if John is getting the treatments regularly. (Hao et al, 2018)

The tests that are needed to perform to diagnose embolism are

Gibb's Reflective cycle is a tool that helps oneself to reflect one's profile in words and then relate his own experiences, learn from them and apply them in specific cases wherever required. A chart of Gibb’s reflective cycle depicts the following stages (Lepetsos,& Papavassiliou, 2016) 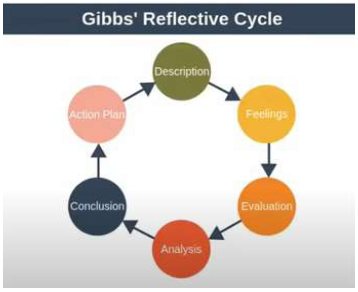 The reflective cycle begins with the description phase. It narrates the case scenario. So, here is how I start describing my specific case:- (Courties, Sellam & Berenbaum, 2017)

I am a trained nurse working in Mayo Clinic and Hospital at Rochester, Minnesota. Almost 3 weeks back, I was given responsibility for Mr. John Grant who was a 63-year-old gentleman with the post-surgery screening of osteoarthritis. in his right knee. Hence I made a treatment plan as per Gibb's reflective cycle methodology.

The first step in my case study of the patient which needed the Description phase to be performed. I found that Mr. Grant had a knee replacement surgery done post his prolonged osteoarthritis ailment. I noted down his present case details which included his temperature, blood pressure, heartbeat rate his drowsiness symptoms post-surgery. I also found out if he had developed any symptoms of shortness of breath after he was done with the operation. He had also complained of some urinal ejaculation pain. (Ghahramani et al, 2019)

Action Plan- Since Mr. Grant had appreciable problems in breathing and high blood pressure, I ensured whether he was provided SpO2 99% on 8 liters of oxygen via a Hudson mask. To recover him from urinal ejaculation pain. I put him an indwelling urinary catheter in situ with 60mL of urine output. I also noted down the readings of his blood pressure and sent a sample of blood for a test for his hemoglobin count in the blood. Once the tests were done I found that he was oozing out a little blood from the operated area, hence I did a complete redressing of the affected area. I had collected Mr. John’s test sample of his urine as a routine test. However, he also complained of pain during urinary ejaculation. Hence I had to send the urine sample for pulmonary embolism tests as well.

My Feelings- During the tenure of nursing, I tried to comfort him in the best way whenever he was awake. Since he was facing a consistent pain in the knee and could not be prescribed excessive painkillers, I tried to deviate his mind in cell phone games and other topics of his interest so that he can lose his attention from the affected area for a while. Mr. John was matured enough not to make enough commotion in the hospital due to his extreme discomfort and I appreciated him for that. He felt happy and tried to be as lively as possible. I salute his patience and endurance at this painful moment of his life.

Evaluation- His operation was successful but due to his high blood pressure and high dosage of medicines, he developed thrombosis and had signs of pulmonary embolism. I kept the doctor well informed regarding the syndrome that he developed post-surgery and the doctor advised some prolonged medical treatment for him. I had to information regarding the same to Mr. Grant’s family. Mr. John is lucky as he is blessed with a caring daughter, a caring son and a caring daughter in law as well. All of them showed deep concerns regarding his health and visited him regularly. The family care and attention that he had received during his days in the hospital gave him enough mental strength to combat the ailment (Anderson & Roberts,2019).

The nursing profession needs cognitive knowledge regarding the diseases and plan of care adopted post-surgery. It is said that a compassionate nurse has the ability to heal the patient faster by her attitude and care. A nurse needs to be vigilant about the symptoms of each of her patients and must clip in hourly reports of the patient. She also needs to understand which patient faces emergency conditions and needs to inform the hospital authority instantly. A patient may or may not have helpful family members but the life of a nurse is a dedicated service to humanity. ( Oldenburger et al, 2017)