Other Engineering and Related Technologies

Bushfires have become an ever present threats to Australia, specifically in sum- mers. Uncontrolled bushfires cause irreversible damage the ecosystem. It causes human injuries and deaths also, apart destruction natural flora and fauna, and other man-made structures. Such a severe destructive impact makes it very vital to identify ways to protect the nation from bushfires. Various tools like Geographi- cal Information Systems (GIS), Remote Sensing, crowd sensing, mathematical and statistical modelling, Big Data Analytics, Artificial Intelligence, satellite commu- nication (RADAR), etc. have been used to protect against bushfires as well as to prevent bushfires. A brief literature review of various technological applications to prevent bushfires and protect the ecosystem, human lives and material from the sharp tongues of bushfire are presented in this work.

Impact of Australian Climate on Bushfires

Bushfires in Australia - a timeline

Bushfire is a devastating phenomena that is face white Australia specifically because of the geography. The American wildfires spread through forest where is the Australian bushfires burn through the grass land and scrublands. The extreme climatic conditions of Australia and the sudden changes increase the probability of bushfires.

One of the the the problems with bushfires is that they are very fast moving (approxi- mately 14mph) and primarily damage farms by burning the crops and livestock as well as damaging the farm infrastructure such as fence, irrigation provisions etc.(Sharples et al., 2016; Athukorala et al., 2019)

In the present work, the impact of on various aspects of Australia environment and lifestyle is presented both qualitatively and quantitatively. Followed by this, the worst bushfires in Australian history are listed. This is followed by a discussion various IT enabled solutions that help in preventing and controlling bushfires.

Impact of Australian Climate on Bushfires

Longer droughts and rainfall deficits are also a typical part of the Australian climate. This leads to drying out and withering off vegetation. Heat waves start bushfire that spread over within minutes using the dried bushes for fuel paving the way for new veg- etation.In fact the Australian native plants and vegetation of Australia have become adopted to regular bushfires. The native plants of the Australian Central and require fire for regeneration of vegetation as explored by the authors in Moskwa et al. (2018).

The temperature of Australia is constantly increasing year after year. This hot dry climate is a primary reason for frequent and very intense bushfires. The dryness facilitates the fires to spread and grow faster, making it difficult to contain or control. Figure 1 shows the climatic change of Australia since 1950. The data is from the bureau of meteorology Australia and visualisation is from the report of BBC describing the Australian bushfires (BBC News, 2020). This shows that highest ever temperature recorded in Australia was 41.9 degree Celsius and that was recorded in 2019. The difference in temperature

between the eastern and western half of the Indian Ocean causes and ocean dipole effect and causes heat waves all over Australia. The Indian Ocean Dipole also called as IOD can be thought of the major culprit for the the extreme climatic conditions of Australia that lead to nationwide bushfires (Cai et al., 2009). 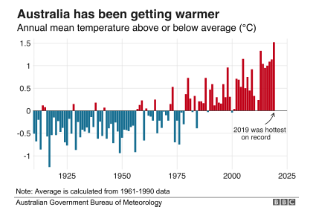 Bushfires in Australia - a Timeline

In past 120 years around 265 bushfires have been associated with the death of humans inclusive of both 850 civilians and firefighters (Blanchi et al., 2014). Issues regarding bushfire damage to communities is higher in peri-urban regions and effective services must be delivered to to keep the impact of fire under control in these regions (Cottrell, 2005).

BBC News (2020) reported that in the past hundred years Australia has suffered from more than 250 bushfire incidents. Some of these incidents have been a lot more worse than others and has been shown in the timeline below Figure 2. The death toll is usually lesser than twenty five but in case of the worst fires death toll is usually more than fifty. The southeast Victoria bushfire in 1926 costed 60 human lives. The Black Friday of 1939 in Victoria caused 71 deaths. The Black Tuesday 1967 in Tasmania cost 62 deaths and the Ash Wednesday 1983 caused 75. The best of all was the black Saturday bushfire in 2009 causing 173 human lethalities (Cameron et al., 2009). The most recent Black summer 2019-2020 bushfire was handled a lot better and the number of lethalities was only 33 and can be taken to be very less, given the widespread and long duration of the fire.

Figure 2: Here is the timeline of the Australian bushfire incidents that caused most damage.

One of the most valuable resources available today is data. Meteorological data from the past bushfire accidents, the current weather data from numerous sensors satellite images data from sensors in numerous mobile phones and other IoT devices that are connected to the internet can be collected. This data would be very rich and very diverse. Using the weather conditions artificial intelligence based methods mathematical modelling statistical and probabilistic inference methods can be used to predict the likelihood of a brush fire event. Advancements in the computational facilities as well as in the speed of real time data collection can positively impact the accuracy with which bushfires can be predicted. Integration of of various technologies so as to predict bush fires in both time and in geographical locations as precise and as accurate as possible is need of hour. Any technology that could achieve such a goal will be very successful. Some technologies that help are discussed in this work briefly.

Australian bushfires have been accepted as a part of lifestyle in Australia it should also be realized that most of the bush fires almost 75% of all the Australian bushfires are started by deliberate lighting (Beale and Jones, 2011). It is a criminal offense to establish a bushfire arson. The author Willis (2005) describes how the motive based typology is found in setting up arson and how it could be prevented by imposing punishments of offenders.

In their pioneering paper Garg et al. (2018) have used a cloud-based strategy for predict- ing bushfires. The application model created by this team can run even on an individual PC thereby making at effective for predicting bushfire. Most of the existing technol- ogy for predicting bushfires runs only on high-performance clusters and hence cannot be useful for time-constrained cyber-physical emergency systems. The software proposed in this work can forecast the probability of fire occurrence in specific regions based on which evacuation operations for other measures for protecting life as well as the material can be carried out before the spread of bushfire. The software can run on smaller machines also, this method is very useful for protecting cyber-physical systems in times of emergency.

Stochastic vehicle routing and scheduling algorithm is developed and proposed to facil- itate emergency evacuation during the times of bushfires. Bushfires are not localized events. Infact the most recent black summer bushfire was almost a national wide disaster that was reading for months together. To ensure the safety of people it is very important to evacuate the regions where virus spreading fast. The routes through which vehicles can reach the spot become very difficult for identification due to various reasons including the smoke. In such a circumstance, a stochastic algorithm can be used to support the scheduling and routing of evacuating vehicles where there is uncertainty in terms of the population to be evacuated as well as in the time window and the direction of bushfire propagation. A greedy approach to reach an optimal evacuation plan is employed and promising results have been demonstrated (Shahparvari et al., 2017; Shahparvari and Abbasi, 2017).

RADARs and several other types of remote sensing devices have been used to two sense bush fires. But the problem with such a setup is the economic viability and the mainte- nance cost involved. Palumbo et al. (2013) at all have developed a small scale X band radar solution that can be used to provide a better picture of weather change and bushfire propagation, using remote sensing technologies. the advantage of the proposed solution is its low cost and small size. Expenses do not require constant maintenance. Using a phase-tilt radar, the authors have demonstrated good accuracy at a lower cost. They have also described the technology behind the X band radar remote sensing process in their work (Palumbo et al., 2013).

While it is important to evacuate people during a bushfire and protect lives immediately this also so essential to provide them with an alternate facility to stay for at least the time required for recovering back post the disaster. using shipping containers as a temporary shelter for people evacuated was proposed (Zhang et al., 2014). The economic viability, as well as the ease of arrangement, makes this a suitable solution for handling post- disaster recovery. A premptive probabilistic algorithm for the sheltering problem was also proposed (Bodaghi et al., 2020).

The threats faced by livestock owners have been very high because it is very difficult to evacuate along with animals. Specifically, horse owners are impacted by bushfire. It is necessary to support them and ensure the safety of these horses. Horses are bigger than smaller companions a preemptive relocation during evacuation for emergency has been proposed (Thompson et al., 2018).

Rusu et al. (2016) used various techniques such as Geospatial data, meteorological data and several data visualization techniques to build a data-driven fire risk prediction system. This system helps in zoning various regions into two regions that are very much prone to fire all regions that are very less prone to fire the software attendance to predict the direction of fire propagation and based on the direction of fire propagation it categorizes regions of high risk and low risk.

Powerline vegetation faults have also been a major cause for bus fire episodes a real-time detection strategy using numerical patterns in the power line vegetation fault it has been provided by using advanced machine learning techniques (Ma et al., 2020).

Bushfires have become a constant threat to Australia given the extreme climate. This growing crisis means that solutions from all possible fronts must be consolidated to make the community as fire-safe and immune as possible. Creating a sustainable fire manage- ment problem Graham is possible only when numerous technologies are developed with the intention of handling different aspects of the problem success prediction prevention evacuation handling post-disaster recovery at etc. In the present work, a brief literature review of Australian bushfires is presented subsequently followed by some of the technolo- gies that have been proposed for handling bushfires effectively. By combining traditional knowledge with the available technology can positively be said that bushfire would be efficiently managed in the future.

A Review of What is Known.

Remember, at the center of any academic work, lies clarity and evidence. Should you need further assistance, do look up to our Engineering Assignment Help