The Role of Anxiety in Academic Procrastination

At the time of studying in school, students may face various changes which may lead to experience stress and anxiety as well. Several academic and non-academic programs can increase the stress level of the students. The current study will focus on the exiting literature that discusses the role of anxiety in academic procrastination.

Definition of anxiety and procrastination

Researchers and psychologists describe anxiety in different ways and different factors are held responsible for developing anxiety. As per American Psychological Association, anxiety can be defined as “an emotion characterized by feelings of tension, worried thoughts and physical changes like increased blood pressure” (Wang et al., 2017). There are several factors that differentiate clinical and non-clinical anxiety. A number of feelings are also associated with anxiety that includes restlessness, uncontrollable feelings of worry, difficulties in concentrating on work, difficulties in sleeping, changes in food habits and others. As per the views of Christensen & Murooka (2019), anxiety may induce several kinds of symptoms and in general changes the though process as well. Some physical symptoms may also be associated with anxiety. These physical symptoms may include muscle pain or muscle tension, nausea and diarrhoea, trembling and twitching.

Procrastination can be referred to a reason of anxiety and also a result of the same. It is associated with behaviour of avoidance. As commented by Kim et al., (2019), procrastination can grow overtime if not provided attention. Individuals in stressful situations may procrastinate and wait for changes in the situation and the tolerance level for the undone things increases. Students may experience anxiety due to different reasons such as upcoming tests, huge number of assignments to be done, bullying at the school, student evaluation and others.

Students of different ages can become stress as a result of tests they are required to give for academic purposes. As per the study conducted by Krispenz et al., (2019), it has been observed that more than 16% of the students may suffer from test anxiety. More specifically, test anxiety has been observed to be existent within 20% of the college students. These findings have been considered as alarming as it may diminish the capacity of learning capacity of the students, impact negative on their academic performances and may ruin subjective wellbeing that is crucial for overall wellbeing of the students. As mentioned by Ng (2018), the reason behind the anxiety and stress is the student’s perception about the tests to be threatening to their self-esteem.

Therefore, it can be stated that not the tests itself but the students’ perception about the test are responsible for inducing anxiety among the students. However, as argued by (Schnauber-Stockmann, Meier & Reinecke (2018), anxiety may not be typically induced as a result of examination situation. Students must perceive the importance of the examination. Attributing the potential success and failure of the students into the tests can increase the level of anxiety due to apprehension regarding not to effective performance. It has been demonstrated any the authors of the study that these test anxiety may lead to subsequent procrastination even at the final stages of their academic terms. Study conducted by Sari & Susanti (2018), has also demonstrated high association between student anxiety and procrastination among the clinical nursing students.

The theory of control-value upon achievement emotions demonstrates the relationship between the emotions and achievement activities and outcomes. As per the views of Sirois & Giguère (2018), achievement is the set of outcomes that could be met through implementation of the quality activities and evaluated against some standard of excellence. It can be implied that most of the student’s emotions are associated with academic learning and achievement. These emotions are related to the behaviors and outcomes that are typically evaluated by the students themselves or by their assessors. The anxiety is induced from these outcomes and activities, when students cannot perform as per their set of standards developed academically or personally. The unpleasant feelings associated with these emotions may lead the students to procrastinate. As argued by Bisin & Hyndman (2020), anxiety is associated with apprehension of the individuals. In this context, the student’s apprehension regarding negative academic results leads them to avoid all their responsibilities associated with study that results in procrastination.

Psychological inflexibility due to anxiety and procrastination

(Eisenbeck, Carreno & Uclés-Juárez (2019) referred to procrastination as a problematic practice associated with regulation of emotions. Its association with the poor health condition of the students is also been established as well. Some of the psychologists consider that psychological inflexibility is responsible for emergence of these kinds of responses to the academic situations. As supported by Sari & Susanti (2018), anxiety is associated with psychological inflexibility where fear or apprehension regarding a specific object or situation may led the person to think or feel in a certain way. It has been observed that students adjust with their surroundings and try to make the best out of their anxiety. However, students that have developed inflexibility in their mind due to association of the other factors such as cultural norms and customs, expectations of parents, personal achievement targets and others.

Gender differences in relation to anxiety and academic procrastination

Anxiety is felt by every individual irrespective of their age, gender and other characteristics. However, some researchers have found gender differences in the intensity of feeling of anxiety. Male students are observed to be in danger of procrastination as compared to their female counterparts. As per the views of Balkis & Erdinç (2017), male students are observed to have higher achievement motivation and high sets of standards that are sometimes difficult to be met due to certain conditions such as health, family issues, personal issues and others. However, these situations create anxiety and reduce the workability of the male students leading them to higher level of procrastination. Additio0nally, it has also been observed that female students have greater ability to perform under pressure as compared to the male students. This may lead to lower performance of the male students and higher anxiety regarding the exam situation or procrastination.

Procrastination as a result of low self esteem and anxiety

Role of meta-cognitive belief and procrastination

Meta-cognition can be referred to as cognition about cognition. In a more simplified manner it can be stated that meta-cognition is the understanding and awareness about the own thinking processes. Both the positive meta-cognitive factors and the negative meta-cognitive factors are observed to play the role of predictors for academic procrastination behaviour. Meta-cognition may become associated with anxiety where students may become aware of their physical and emotional responses associated with their increased anxiety level such as loss of appetite, sleep disturbance and others (de Palo et al., 2017). This may lead to justify their procrastinating behaviour and can make it last for a long time. This is responsible for reducing their quality of study work leading to low standard results. The low standard results seem to reduce the self-esteem and to decrease motivation leading students to procrastinate in a greater way. 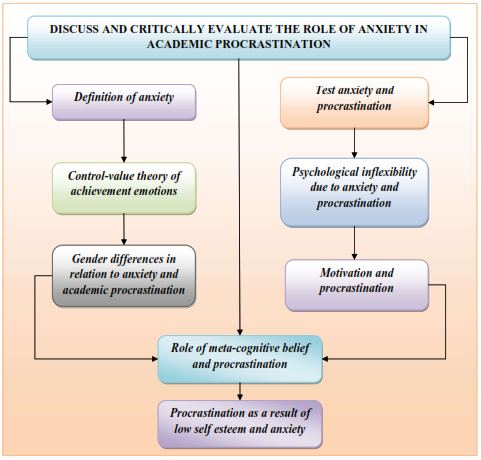 Literature Gap and Conclusion on Role of Anxiety in Academic Procrastination

In conclusion, it can be stated that there are several factor identified to be associated and working as a mediator between procrastination and anxiety. However, the there are very small number of research evidences regarding the role of the external factors that play a vital role in inducing anxiety and resulting in procrastination.

References for Role of Anxiety in Academic Procrastination

Balkis, M., & Erdinç, D. U. R. U. (2017). Gender differences in the relationship between academic procrastination, satifaction with academic life and academic performance. Electronic Journal of Research in Educational Psychology, 15(1), 105-125.

Krispenz, A., Gort, C., Schültke, L., & Dickhäuser, O. (2019). How to Reduce Test Anxiety and Academic Procrastination Through Inquiry of Cognitive Appraisals: Investigating the Role of Academic Self-Efficacy. Frontiers in psychology, 10, 1917.

Schnauber-Stockmann, A., Meier, A., & Reinecke, L. (2018). Procrastination out of habit? The role of impulsive versus reflective media selection in procrastinatory media use. Media Psychology, 21(4), 640-668.

Remember, at the center of any academic work, lies clarity and evidence. Should you need further assistance, do look up to our Psychology Assignment Help