1 b. Corporate governance is a procedure under which a corporation is governed and controlled. The scope of governance is not exhaustive in nature but includes various departments that affect the administration of a corporation. This will include the role of the employees, suppliers, customers, partners, professional organizational regulator's, as well as Government and other communities. The scope of corporate governance and its principle must include the equitable and right treatment to the shareholders along with the responsibility of the board (Meijer, 2015). Integrity and ethical behavior associated with the transparency and disclosure also is a key component under corporate governance.

The diagram indicates that there has to be an environment of confidence between the competing partners which will help to enhance the value of shareholders' interest in the corporation. The scope will include both the internal as well as the external stakeholders which are responsible for appointing the board of directors and monitor the reports regarding the operations for core functions in the financial sector. Laws and regulations are used to analyze the standards of such reports which are necessary to provide support for the finances of the corporation (Tricker, 2019).

Therefore the diagram shows that reputational agents play an important role in the marketing sector which directly as well as indirectly affects the foreign direct investment for the corporation. So the diagram describes the importance of the internal stakeholders as well as the private agents in the corporate governance. the external department of corporate governance is not exhaustive but includes various sectors and apartments which plays a vital role in improving the overall efficiency and performance of the corporation for the longer-term. 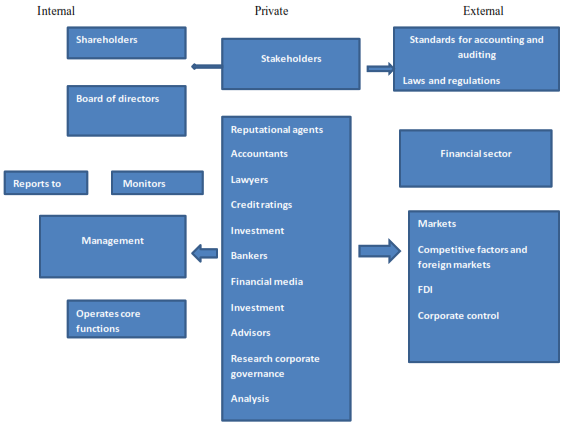 2. Under the American rule-based model, the companies are incorporated in the individual States which are subjected to be company laws. Under this rule, certain Federal responsibilities are enshrined upon the Organization in order to protect the investor and look after the auditing requirements and financial closure. Under this rule, the company law is certainly based upon the common law principles where the unitary board is three dominated by the outsider independent directors (Mitchell, 2011). Under this rule, the stakeholders have very little influence upon the membership of the board where the CEO and chairman are separated from each other.

This is the reason why it is also known as a rule-based model as the governance is mostly regulated by the inflexible mandatory rules, where the directors have to face various legal penalties under the situation of non-compliance. However, the UK principle-based model is also based upon the common law principles. It is different from the American rule-based model in such a way that it under this the legislation is extended by the case laws and is not rule-based but principle-based. Under this model, the codes of the corporate governance principle as well as the good practice are determined through the responsibilities of the board of directors and not by the rule of law (Albert, 2016).

It is the requirement under this model that the corporations must report to the authorities that day had complied with the procedures laid down under the common law and governance principles. The self-regulation scheme is underline in this model (Tricker, 2019). Therefore it is evident that the UK principle-based model is likely to sustain for a longer-term. Unlike the US rule-based model, this model calls for separate interdependence between the CEO and chairman of the organization where a high level of transparency and accountability is encouraged (Jermakowicz, 2006). The UK based model is likely to survive as it provides much more importance to the culture of the company which permeates the activities at various departments.

Cadbury's report suggests that it had also acquired the UK principal base model and the same had helped to attract the investors for the company. Therefore it can be concluded that with the support of the employer explain principle the duties are much more seriously taken by the directors in the organization which helps them to reform their aim for achieving the goal. With the help of this UK model more specific and accurate reporting can be monitored and analyzed which will provide better engagement between the shareholders and board of directors. Apart from this, the accountability of the executive directors can also be monitored accordingly. Unlike the US model, this approach will help to expand the role and powers of the financial reporting council which will ultimately help the company to improve its performance in every department.

Albert, M. (2016). National Transparency Regimes: Rules or Principles? A Comparative analysis of the United States and The Netherlands. International Journal of Public Administration, 39(11), 895-908.

Meijer, A. (2015). Government transparency in historical perspective: From the ancient regime to open data in the Netherlands. International Journal of Public Administration, 38, 189–199.

Remember, at the center of any academic work, lies clarity and evidence. Should you need further assistance, do look up to our Corporate Governance Assignment Help