Calculation of assessable income of BFF:

CGT consequences for relocating to Singapore

Another thing in relation to taxation is the capital gains tax under division 102 of ITAA 1997 which takes place when there is a transaction of capital assets giving rise to income or loss. Keeping all these in mind, the primary purpose of this assignment is to Advise Mr. and Mrs. Baldwin on what amounts will be included in the assessable income of BFF Fine Jewelry Pty Ltd (BFF). The next part of the assignment report calculates the assessable income of BFF for the year ending 30th June 2020. Further the Capital gains tax consequence of moving to Singapore assuming Mr and Mrs. Baldwin will be explained considering the fact that both of them are foreign citizens of Australia after having moved to Singapore. Lastly the assignment will explain the possible capital gains tax implication that might arise if they accept to sell shares in BFF.

Sales- $3,500,000- This is an ordinary income under section 6-5 of ITAA 1997 and as per the principle given in the case of 2GP International Pipecoaters Pty Ltd v. FCT where it was held that any inflow of money that has a periodic, regular or recurring nature is ordinary income. The income from sales were earned from the sale of jewellery directly to retail shop in Australia. Therefore, has the nature of ordinary income.

Proceeds from disposal of business premise- $2,620,000- This is not an ordinary income rather it is a capital gain earned from CGT event A1 from the disposal of assets under division 102 of ITAA 1997. However, considering the base value of the business premise there was an income a it was sold at a price of $4,500,000.

Trading stock- $350,000- Trading stock is generally part of assessable income because of the fact that is satisfies the requirement under section 6-10. It is a part of the statutory income because disposal of trading will earn an income.

Account receivable- $390,000- This is the amount which is still needed to be paid by the customers. The Income Tax Assessment act does not levy any tax on the amount that is yet to be earned.

Calculation of Assessable Income Of BFF: 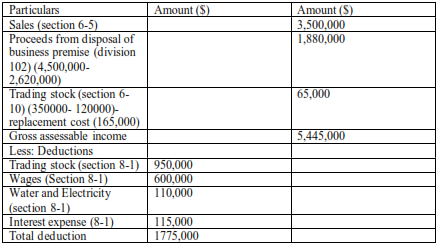 CGT Consequences for Relocating to Singapore

BFF sold their business premise for $4,500,000 which was brought for the price of 2,620,000. This means there was a CGT even A1 giving rise to an income of $1,880,000. As both of them are foreign residents, they can avail the 50% CGT discount regardless of the residency status. This is because they were resident after the date of 8th May 2012. The legal fees and agent fees paid for the sell is eligible for deduction as it satisfies the positive limbs of section 8-1. The assets in Australia after Mr. and Mrs. Baldwin has relocated to Singapore will be considered as per taxation ruling 3IT 98/17.

The sale of residence does not have any capital gains tax implication because it was the main residence for Mr. and Mrs. Baldwin. Therefore, no cost arising out of the property is deductible under section 8-1 as it satisfies the negative limbs of the provision.

The investment property gives them income, therefore is taxable and the expense arising out of it is deductible in nature. The vintage motor vehicle is also giving rise to CGT even A1 because of its disposal. The Art collection is considered collectibles which is eligible for CGT implications. The 2000 units in the ABC trust also is an asset whose sale will gives rise to CGT event.

Mr. and Mrs. Baldwin have an assessable income of $3,670,000. The business property, shares, vintage car and trust units sold have CGT consequences. And the shares sold by them is eligible for 50% CGT discount.