Material of Construction for an Aircraft 7

This technical report discuss conventional fixed-wing Australian aircraft structures and system components. The selected Australian Aircrafts are Airtourer 100 and Aircruiser 210 cs. The Fuselage structures (cockpit, hatches, doors, or other openings, and any ancillary components (eg engines) are discussed for each of the aircraft. Moreover, the report addresses loads on sub-structure and how the structural composition facilitates efficient transfer of these loads.

Airtourer is one of the most popular aircraft built in Australia. Designed by Dr. Henry Millicer in the late 1950s in Australia, An Airtourer 100 is a cantilever low-wing, two-seat monoplane touring aircraft (Airtourer, 2020) with a fixed nosewheel landing gear. Aircraft Association of Australia (ULAA - later SAAA) group constructed a wooden prototype during the late 1950s (Victa Airtourer scrapbook, 2020).
Flt. Lt.Randell Green flew its first time at Moorabbin airport on 31 March 1959. After several flights, developments were made to convert airtourer into an all-metal version. The all-metal prototype production standard was decided on 12 December 1961.

The chairman of Victa Ltd (Victa at that time was a manufacturer of outdoor green garden types of equipment such as mowers, chainsaws, etc) was interested to enter an aviation industry. Victa started to produce all-metal version Airtourer from 1961 to 1966. It builds both 100 hp and 115 hp models. Victa manufactured 168 Airtourers from 1962-1966 (both 100 and 115 hp). Victa stopped producing Airtourer in 1966 because the Australian government had refused the appeal of Victa for tariff assistance.
In 1967-1968, Aero Engine Services Ltd (AESL) of Newzland purchased the Airtourer manufacturing rights and it produced 115 hp and 150 hp Airtourers till 1973. AESL manufactured 80 Airtourers from 1967-1973 (both 100 and 115 hp). In 1970, AESL got the rights to manufacture CT/4 Airtrainer.

Fuselage Structure
The major structure or body of aircraft is called fuselage. The stabilizers, wings, power plants, and landing gear are fixed with the fuselage. The fuselage offers space for cargo, controls, and many accessories that are located in the fuselage. 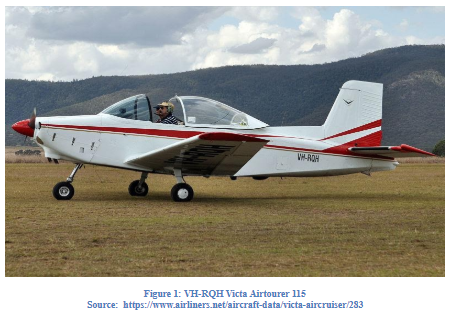 The fuselage structures are discussed as follows
Seating
An airtourer has seating arrangements for two people i.e. spacious side-by-side seats. An armrest is provided to support the pilot's arm. A washable vinyl backed by soft foam rubber upholsters seats.
Pushbutton Starter
An airtourer starts with a push-button starter. With a pushbutton starter, an airtourer can be easily started. A center console consists of starting controls and key ignition.
Central Armrest Control column
dual-control training is possible with a central control stick without any additional cost of dual types of equipment.
Canopy
It had a sliding canopy made up of Perspex.
Pilot Planned Instrument Panel
All essential dials are present in the control panel and within easy access to pilots.
Luggage Space
A luggage space (approximate capacity is 100Ibs) is provided in airtourer behind the seats.
Length: 6.55 m (21 ft 6 in)
Height: 2.13 m (7 ft 0 in)
Engine and Propeller
An airtourer 100 delivers 100 h.p. at 2,750 pm. An engine is fitted with McCauley metal propeller with following specifications
Diameter: 69 inch (175 cm)
Pitch: 50 inch (127 cm)

After the success of Airtourer, Dr. Henry Millicer designed Aircruiser 210cs in 1960 in Australia. It is a low-wing, four-seat monoplane touring aircraft (Airliners.net, 2020). It was powered by a 210 hp continental I0-360-H piston engine. It had a fixed nose wheel landing gear. Aircruiser had a fixed cabin roof. It was first flown on 18 July 1966. The Aircruiser was a competitor to American four-seaters.

Victa Ltd got the certification rights of Aircruiser but it did not produce any Aircruiser because the Australian government rejected Victa's appeal for tariff assistance. In 1969, Aero Engine Services Limited (AESL) of New Zealand purchased the design rights of Aircruiser from Victa's in 1969 (Victa Aircruiser, pictures, technical data, history - Barrie Aircraft Museum, 2020). Pat Monk, a chief designer of AESL, redesigned the Aircruiser as an aerobatic military trainer.

In 1994, Tony Peter (an owner of the flying school in South Australia) conducted a market study for the demand of two to four-seat aircraft in Australia and came to know that there was a high demand for these new aircraft. An association was created to get the Aircruiser design and type certificate with Millicer Aircraft Industries. This industry was launched to upgrade Aircruiser to be produced as M-9-200 Shrike. In 1998, the Shrike name was dropped in favor of AirCruiser (with an upper case "C"). Initially, it was planned to manufacture and deliver the first M-9-200 in mid-1997. However, the first M-9-200 could not fly until September 1999. The first delivery to customers was planned in 2000. It was decided to construct and sell Aircruisers and AirTourers in a newly designed factory in sales in Victoria. Comparing with the original Victa Aircruiser, the M-9-200 AirCruiser would have these features
1. A fuel-injected IO-360 engine
2. Standard GPS, controls, brakes and new wheels
3. Retractable variation in the undercarriage
Miller faced financial difficulties in 2000, earlier than the M-9-200 had been flown. Therefore, at present, only one Aircruiser was built (Airliners.net, 2020).
In 2013, Brumby Aircraft Australia purchased the rights of producing Victa Aircruisier to be produced by Brumby Aircraft Australia. 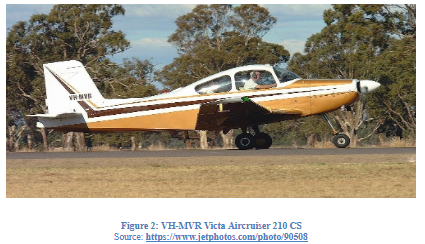 Fuselage Structure
The Fuselage structure of Aircruisier is discussed as follows
Canopy
It had a fixed canopy.
Door
It had a single door on the left-hand side.
Length
7.09 m (23 ft 3 in).
Height
2.59 m (8 ft and 6 in).
Propellers
Constant speed impeller (2 bladed Hartzell)
Empty Weight
612 Kg
Maximum Takeoff Weight
1089 Kg
Fuel capacity
50 US gal (190 L) usable fuel

Reliability, weight, and strength are three primary characteristics that determine the materials required for the construction or maintenance of an aircraft. Strong and light airframes are highly recommended because a heavy aircraft could not support the additional weight. Reliable materials must be used for the manufacturing of aircraft so that dangerous and unexpected failures could be minimized.

The material of Construction for an Aircraft

The metals used to build an aircraft are
• Aluminium (Lightweight is one of its outstanding characteristics)
• Magnesium
• Titanium
• Steel
• Other Alloys
The other types of materials that are used in the construction of an aircraft are
• Transparent Plastic (use to build transparent enclosures such as canopies and windshields)
• Reinforced Plastic (use to build wings wingtips, stabilizer tips, radomes, antenna covers, and flight controls)
• Composite and carbon fiber material (use to fasten conventional sub-structures)
Similarity and Differences Between Airtourer and Aircruisier
The major similarities and differences between Airtourer and Aircruisier are highlighted in table 1

An aircraft at rest or when it is flying experience many forces and structural stresses. At rest, an aircraft experience gravity force which produces weight, and landing gear supports that weight. The forces act on aircraft during landings and take-off is absorbed by the landing gear. The acceleration or deceleration during flight increases the stresses and forces on fuselage and wings.
Fuselage, landing gear and wings are subjected to following stresses
• Tension
• Compression
• Shear
• Bending
• Torsion