Figure 2: Trends of Interest Rates since 2000

Table 1: Demand and Output Growth (in %)

Monetary policy consists of a method of drafting, presenting and implementing action plans taken by the Chief Bank, financial authorities in the countries that control the amount of money and flow of new money through the economy. Monetary policy consists of dealing money supply as well as interest rates to achieve economic goals such as inflation, consumption, growth, and liquidity management which can be achieved through actions such as changing interest rates, buying and selling government bonds, adjusting foreign exchange rates, and changing the amount that the bank needs to maintain as a reserve (International Monetary Fund, 2015). 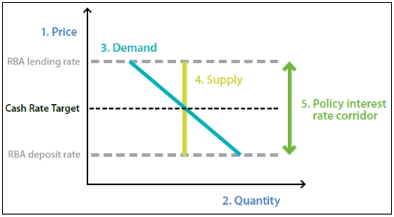 Interest rate is generally low in last some years as compared to previous years as shown in below graph. As market players evaluated the COVID-19's impact, financial markets became more unstable and the price of numerous dangerous resources dropped abruptly. Uncertainty caused by the outbreak and the hope that the central bank will respond with simpler policies have reduced the yield of long-term government bonds to the historical minimum in many countries (Blanchard, 2019). The Australian dollar cut down to its bottom level in more than 10 years.

Figure 2: Trends of Interest Rates since 2000

The emergence of COVID-19 around the world has had a significant impact on the Australian economy, especially in the Australian education, transportation and tourism sectors. The uncertainty associated with the outbreak also increased the risk of affecting private budget and business investment over the next few months. As a result, GDP growth in the March quarter is likely to drop significantly less than previously predicted, making it difficult to predict how long it will take for the economy to return to its normal level of activity. After the turmoil, GDP growth was expected to recover, supported by low interest rates, high infrastructure spending, lower exchange rates, stronger investment in the resource sector, and a recovery in housing construction and household consumption (Dolbneva, 2020). The Australian government has also shown that it will help the areas of the economy most affected by the COVID-19 outbreak.

Based on these developments, members noted that progress to full employment and inflation goals is expected to be phased in before the COVID-19 occurs, and how best to respond is best. The COVID-19 was expected to be further delayed.

In discussions on possible monetary policy measures, members welcomed the Australian government's view that financial measures will be taken to support the cash flow of investments, affected companies and jobs. They also discussed the support offered to work and economic activities through lower interest rate support and consolidation of family and business cash flow. Member countries acknowledge that a combination of financial and financial measures can help address the challenges COVID-19 faces.

The Australian economy grew 0.4% in the September quarter and 1.7% at the end of the year (as shown in graph and table below). Many factors put pressure on annual growth. The household has been adjusting to a longer-term growth in low income, and this has contributed to a weak growth in consumption. Housing investment is now in a downward phase following the previous decline in housing prices. Mining investments are passing through the valley and are likely to show growth in the next quarter. The effects of the drought have been ongoing and recent wildfires have contributed to the agricultural sector's economic downturn. Working in the reverse direction, the export progress was comparatively stronger than that in 2019, supporting economic growth (Del Negro, Giannone, Giannoni & Tambalotti, 2018).

Growth in Employment during December quarter was moderate, but employment growth increased significantly more than employment in 2019. The latest leading indicator suggests investment in mining and housing will improve in 2020.The growth in consumption is expected to gradually recover. Forest fires and the coronavirus are expected to shrink growth in the current period; however, it is temporary. 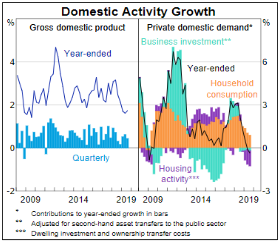 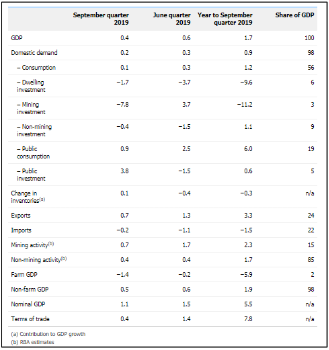 Table 1: Demand and Output Growth (in %)

The Australian economy has benefited greatly from its close integration with the world's capital markets. The openness means that the domestic economy is affected by changes in the global financial situation. However, if the other conditions are the same, falling interest rates overseas will tend to look at the global flow of capital into Australia, which will contribute to the rise of the Australian dollar.

The world's commodity trade, industrial production, and global manufacturing sectors have experienced a significant downturn over 2018 and 2019. Raising trade tariffs, increasing policy uncertainty, and lowering business confidence were key elements at the base of the world economic downturn in 2019. The International Monetary Fund (IMF) predicts the following figure (Kalchenko & Oliinyk, 2019). 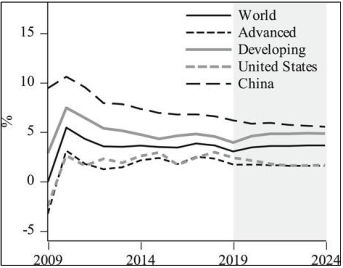 The members started the discussion about the world economy, focusing on how the expansion of the COVID-19 was expected to have more impact on the world's growth in 2020 than it was already reflected in the forecasts presented at the preceding meeting.

The movements taken by the Chinese establishments to bound the expansion of the COVID-19 strictly limited China's economic activities in the quarter of March and there was still great uncertainty about the size and sustainability of the confusion. This shows that there was also a confusion in the supply chain. Retail and residential real estate sales were suppressed.

The world's oil demand forecasts have dropped significantly in view of the confusion in China's logistics and other transportation. This will lead to a deterioration in worldwide significant inflation. Values of other goods, which incline to respond to changes in the global demand viewpoint, including base metals, also fell from the beginning of 2020. Also there seen a dropped in the price of liquefied natural gas. The prices of other bulk products were net and did not change much. Even if China's iron and steel stocks had increased, the iron ore prices turned around in the past fall in expectation of a retrieval in demand from economic action (Douch, 2018).

Other economic growth in Asia was also probable to be lower this quarter than previously expected, sparkling the decline in China's domestic demand, the decrease in China's overseas travel, and the impact of supply chain chaos. The early indicators of Asian trade activity in February dropped after trade, industry and manufacturing indicators in a more export-oriented economy were stabilized, within signs of stability in the world's electronic cycle. Overall, the development of Australia's major trading partners was anticipated to fall by about 1/2% in 2020 as a consequence of COVID-19.

Before the supply disruption associated with COVID-19, industrial production in the euro zone continued to decline, particularly in the automobile sector. The members said up until today there have been no reports that supply disruptions were contributing to these declines. Some of the U.S. and Japanese business sentiment data deteriorated sharply in February, but U.S. venture and economic sentiment improved.

The good news is that many of the negative factors that have been pushing down growth are beginning to weaken, so the recession is not expected to persist. Tax cuts and reductions in mortgage payments help increase the disposable income of the household that should support personal consumption through the latter half of 2020.In addition, a solid pipeline of state infrastructure spending supports project investment and employment, especially in the construction sector across the East Coast. The fact remains that the central bank of Australia has just lowered its official interest rates to the lowest ever. It is a sure sign that everything is not going well with the country's economy. While a better outlook for personal consumption and business investment supports growth in the second half of 2020, growth remains relatively subdued compared to Australia's historical high growth rates.